Not much to add.  Just looking at chart patterns… and see what looks like:

There’a a bearish Bat pattern setting up on XLF in another .10 or so; VIX horizontal support at current prices, a falling wedge and descending broadening wedge on VIX hourly, bumping the -2 bollinger band on VIX, negative divergence between price action and RSI and histogram on SPX, VIX, RUT, COMP and SPX, overhead resistance from 50 SMA all over the place.  Right shoulders developing on SPX, RUT, etc.  They go back to February and are starting to look fairly well formed.   Good luck, everyone!

What seemed laughable two weeks ago actually happened today, as SPX reached 1321.97 intraday — 3 cents shy of our 1322 target drawn back on June 16 by studying trend lines.  In so doing, it is within spitting distance of its IHS target as well as completing bearish Bat and Crab patterns.  It also reached our statistical target and bumped up against the trendline which should limit the rally to these levels. 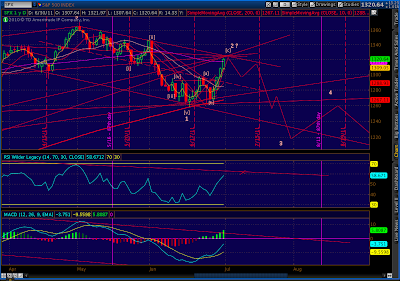 VIX also dipped below our target of 16, reaching 15.88.  I currently view any dip below 16 to be a good buying opportunity.  But, keep in mind, the decline not only hasn’t been confirmed yet, it hasn’t even started.

My confidence in this pattern unfolding over the next month is about 75% — less than I’ve had over the past several weeks.  I hope to spend more time studying the charts later tonight and will try to clarify things.  But, I’m traveling this week, so might not have the time.  The patterns to which I’ve referred are discussed in detail in various posts over the past several weeks.