Once again, the financial establishment must be wondering how to cancel the Bernanke Show.  Though, that’s not the real reason the market is down 21 points to 1265.  It’s the economy, of course.  With a little help from a bone-headed move to tap the strategic oil reserve.  And, this morning, we get a little taste of what things will be like in the coming weeks.

The pony in this pile of crap is that if SPX holds at these levels, we will have established a new higher low.  Technical indicators are all through the floor, indicating a short-term oversold situation.  Even the daily MACD is threatening to hook back down and the histogram is hinting at a return to negative territory.

I’m adding to long positions here, as the upside case is still intact.  The Inverse H&S on the SPX and the H&S on the VIX that I talked about last night are simply that much closer to completion now. 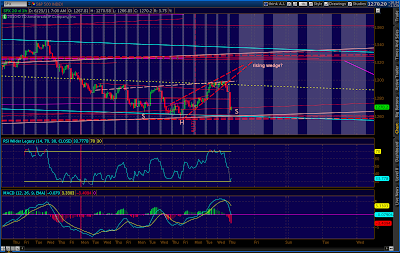 Interestingly, both will feature a spike in their right shoulders, just like we saw in the smaller patterns completed on the 20th. 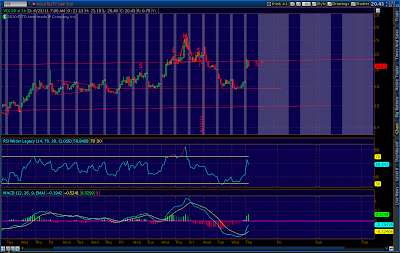 To recap, the SPX IHS indicates an upside to 1328, and the VIX H&S indicates a target of 11.  Yes, 11.  Not saying it’ll happen, but just the prospect of it might take bullishness to a new extreme (provided we survive the bearish mauling this morning.)

If this rebounds in the next few hours, it’ll make for a heck of a bullish hammer on the day.