QE3 is so far looking more like QE1.9.  A promise to keep rates at current levels through mid-2013 is net positive for stocks, as it implies a stable interest rate environment — thus, theoretically mitigating the risk of higher rates.

Of course, the Fed has no such power.  If rates get going to the upside, there’s not a lot they can do.  The dollar traded off on the news, promptly becoming oversold.  DX has strong support just below these levels, with an internal TL at 73.82, the last low at 73.61, and combination TL and Fib support at 73.56. 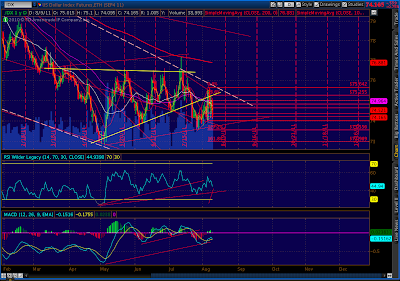 A reversal as early as overnight or tomorrow morning is entirely possible.  If so, stocks’ rally would no doubt be cut short.

We’re also most of the way to an IHS target of 1185, seen here on the 5-minute chart. Two previous intra-day IHS patterns failed, so this one wasn’t a gimme. 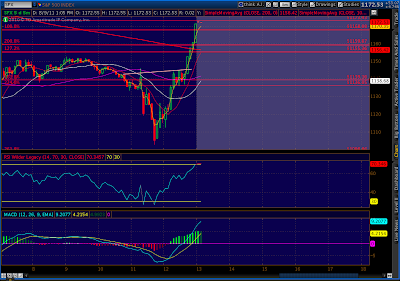 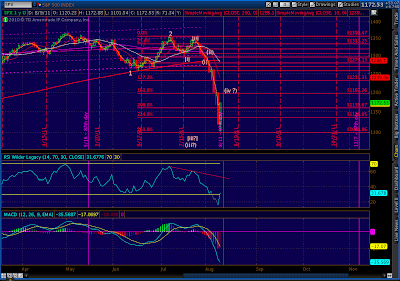 From a macro standpoint, nothing new to get excited about.  The Fed’s statement underscores the crappy economic backdrop.  Lower oil prices might create some trickle down benefit; but those take time to reach the market.  And, in the meantime, consumers and businesses alike are certain to view the recent market action as all the reason they need to reign in spending.  I think most of the GDP estimates being discussed by TPTB are optimistic at best.

Last, gold made a nice reversal today.  Check out All That Glitters for additional discussion.

The IHS can’t seem to seal the deal.  Like the failed IHS two days ago, the index is trying to rally, but there’s a lot of divergence setting up on RSI and the histogram.

Why?  This rally was built solely on the expectation of Ben Bernanke riding in on his big, white Brinks truck at 2:15pm. 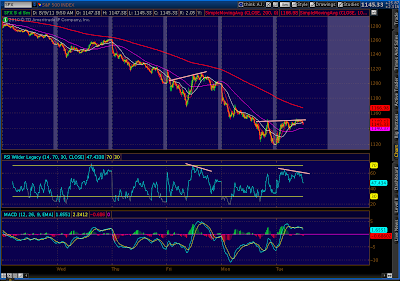 The market’s itching to make a comeback, but there’s no obvious support that I can see at this level.  Nothing for the market to hang its hat on. 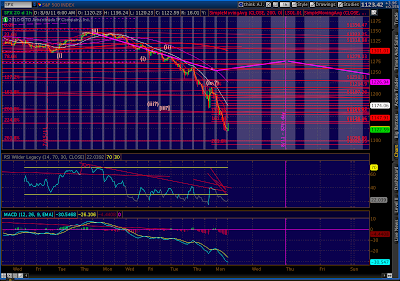 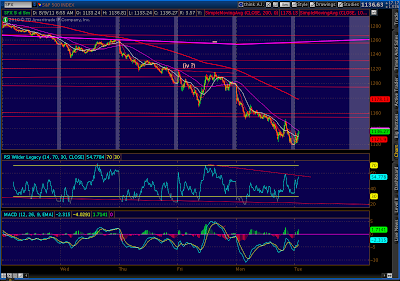 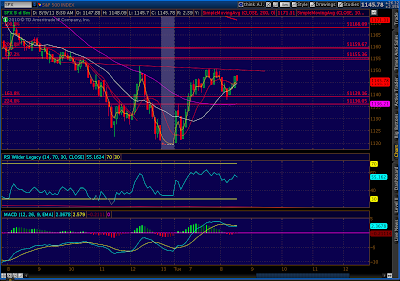 If the day goes by without any positive news from Jackson Hole, we could easily see a drop to those levels, setting up the powerful rebound everyone’s looking for.

Rebound or not, the general direction is still down.  Most of us expect a rebound, because the daily technical picture looks a bit oversold.  But, keep the weekly and monthly charts in mind as well. 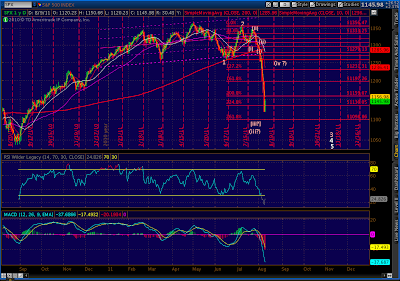 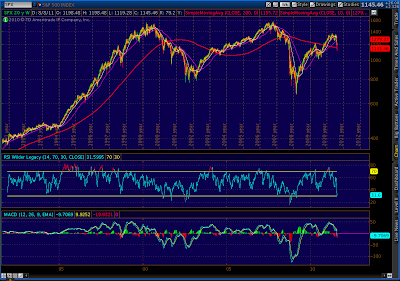 The weekly chart recently pierced the 200-period MA, falling 36 points below it at yesterday’s low.  Many expected a bounce here, like in 2001 and 2008.

In other words, don’t read too much into the idea that the MA may have beat back the bears.  Even in the short-run, we could have another 100 points to go before a serious backtest occurs (if playing by the 2001 rules.)

The big picture is clearly bearish.  The only two past incursions were the early stages of much bigger declines — the 2001 and 2007 crashes. 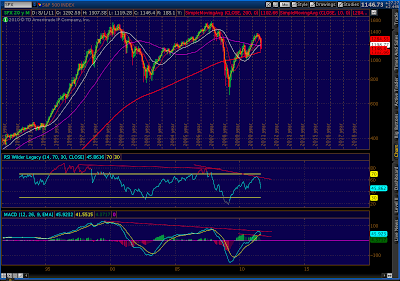 It backtested, but couldn’t break back through to the positive side the following month.  In fact, it took 10 months to break back on top after making a new low of 666.