GC climbed 62 points to 1782.50 today, completing a bearish butterfly pattern and then establishing an intra-day double top.  Post the Fed announcment (with no QE) it fell 56 to 1717 before closing up 26.  It was an impressive reversal that reinforces the notion that investors were counting on QE to fuel the next spike. 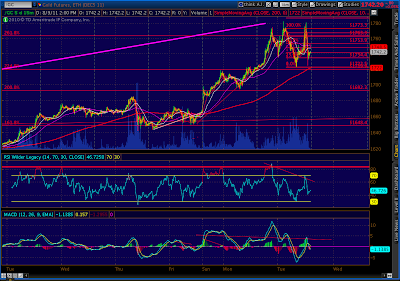 I’ve been watching the divergence setting up on gold’s hourly chart for the past week or so.  It’s getting pretty extreme, leading me to believe something’s gotta give. 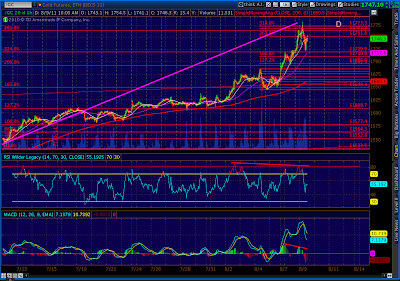 Getting away from the technical picture for a moment… it seems the entire run up has been predicated on the certainty of a declining dollar.  It’s an easy scenario to believe, since the Fed has so thoroughly trashed the dollar in previous rounds of QE.

And, they could certainly try it again.  We’ll know soon enough.  But, if they don’t, this is one very over-extended puppy.  I like the risk/reward very much — not enough to bet the farm on, but definitely worth a shot.