Had a little more time to study this…   It’s open to interpretation, but here’s what I’m seeing.  I’ve stacked the Feb – May 2011 top over this 5 week consolidation and compared them point by point. 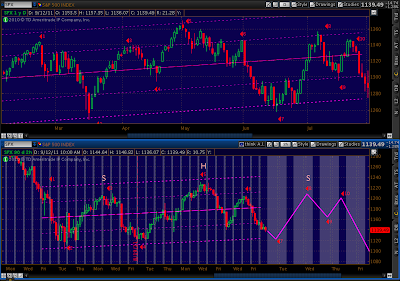 There are a few discrepancies, but nothing that concerns me too much.

The biggest question is whether the channel down from Jul 22 should include the upper shadows from Aug 31 and Sep 1.  If not, then Point 8 — when contained by the channel — will land around the regression channel midline at, say 1185. 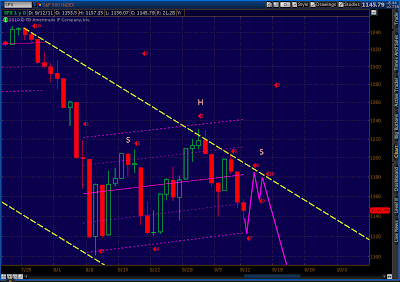 If we include the shadows in drawing the channel, then Point 8 would be a little beyond the midline, at around 1200.  In many past topping patterns such as 2001, the midline defines Point 8.  In 2007 and 2011, however, the market overshot the midline.  I suggest it will be largely a function of the momentum we have going once the reversal occurs.

Speaking of reversals, note that this little drama — which will no doubt draw a huge amount of attention due to its being “completely unexpected” — will fall short of the the Sep 8 high at 1204. This is significant, as once we reverse off Point 8, the subsequent drop will complete a new, larger H&S pattern that points toward 1016. 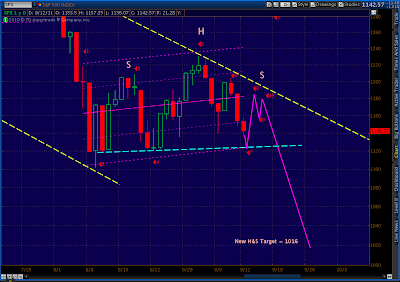 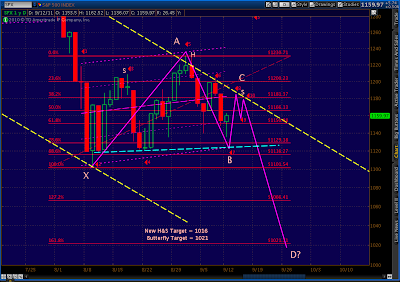 I’m intrigued by the idea of the consolidation action we’ve seen since Aug 9 playing out as a fractal of the larger topping pattern from Feb 18 – July 22.  First, a look back: 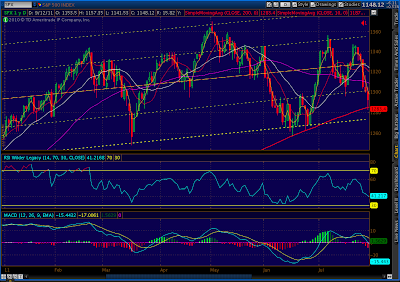 As I’ve discussed in numerous posts leading up to this decline, I have come to view this pattern as essential to all significant market tops.  In a nutshell, it looks like a three headed “M,” bounded by a two standard deviation regression channel.  Typically, the three tops of the M form a Head & Shoulders pattern, as happened this last time.
One prevalent characteristic in all such patterns I’ve studied is the “last hurrah,” one last swing from the bottom of the pattern towards the top, that stalls at the channel midline.  In 2007, it reversed right there.  In 2011, it actually overshot the midline and turned, instead, at the +1 standard deviation line.
It falls off, but recovers — taking on the look of a continuation of the ascent.  This is a bull trap, however, as another seemingly insignificant reversal occurs shortly afterwards.  This reversal is the final straw for the topping pattern, and a swift decline follows.
Now, take a look at the consolidation of the past five weeks: 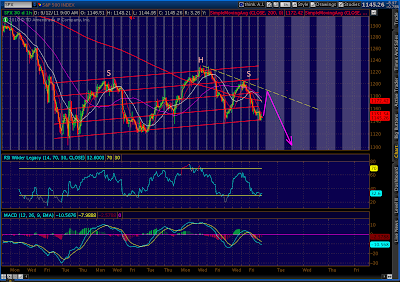 Notice any similarities?  This pattern has taken five weeks instead of five months.  And, I’ve established the regression channel lines at -1.5, -.75, 0, .75 and 1.5.  But, otherwise, the movement is the same — right down to the recent move up past the midline.
Since everything’s happening at 4X speed, I’m not positive we’ll get that last little bump that’s the equivalent of July 22.  Looking at the support we’re encountering at 1140, probably so.  It would likely occur at the dashed yellow line, which just so happens to mark the channel that’s been guiding the downside since Jul 22.  Here’s a better look: 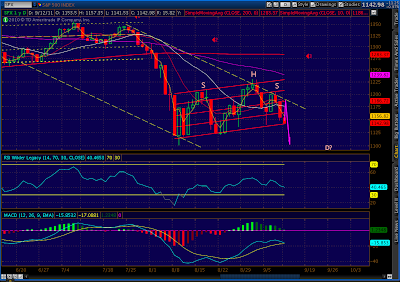 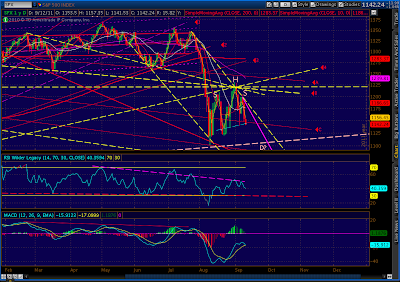 Unless you’re a day trader, it really shouldn’t matter.  Once we convincingly push through the bottom channel line at 1140, we’ll head south in a hurry.
Remember, we have an appointment with the H&S target and Butterfly pattern point D at around 1050.  Of course, if the recent past is any indication, we’ll overshoot — maybe as low as 1020.

Global markets off, with the SPX plunging below Fan Line C as we discussed Friday.  The H&S pattern has been completed, and we’re well on our way to point D on the large Butterfly pattern. 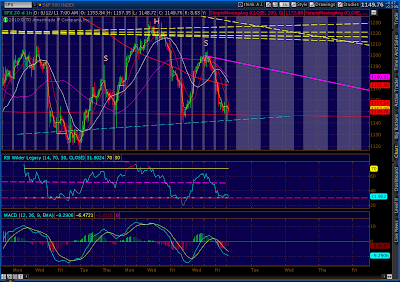 We should see a backtest of Fan Line C, as the futures did yesterday.  And, there’s the possibility that we’ll head back up for another test of the channel, but the next move of any substance is the mid-1000’s.