Checking in on our regression channel and requisite rising wedge (the exclamation point!)  So far, so good.   Looks like we should get to 1182 – 1188 before the fun starts.

We should expect to see more divergence on the 5-min RSI and possibly the histogram soon. 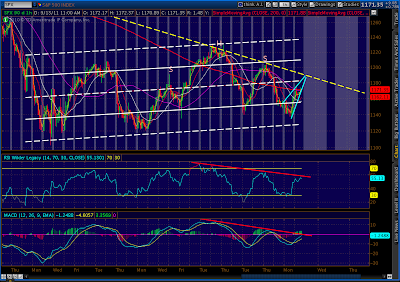 Euro got a little bounce from Merkel’s interview this afternoon:

I see… we have nothing to fear but acknowledgement of the bloody, horrid reality itself.

Geithner is even taking the unprecedented step of attending Friday’s meeting of the EU finance ministers in Poland… ’cause nothing settles nerves like a guy who arranges train wrecks racing to the scene of the next train wreck.

Meanwhile, has anyone checked in with the people of Greece?  Last I heard, they had no interest in yet more austerity so that the world’s bankers can limit their losses.  I’ll say it again, the 2007-2009 crash (will we call it the mini-crash?) was the result of several failed companies.  This time, we’re talking countries.

I remember something from a psychology class I once took.  Kubler-Ross, the five stages of grief.   I think it was: (1) denial, (2) anger, (3) bargaining… then… what was that next one?

Little H&S just completed on the 5-min chart… calls for a return to 1146-ish. 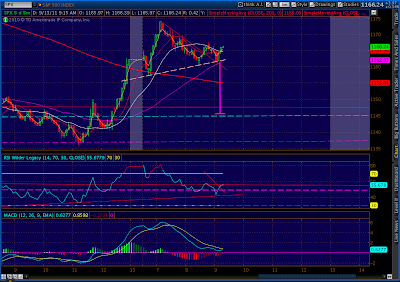 A closer look at the dollar…   DX has traced out three points of a perfectly formed Bat pattern, which calls for an 88.6% retrace from the top.  The bullish flag we’ve formed over the past couple of days is right at the .618 level.   Our target is 80.635. 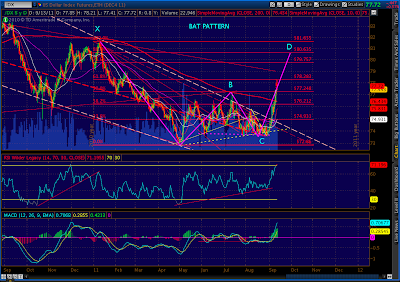 That might seem high, given how quickly DX has risen to its present height and the fact that its RSI looks overbought already.  But, consider what happened the last time the stock market fell apart: 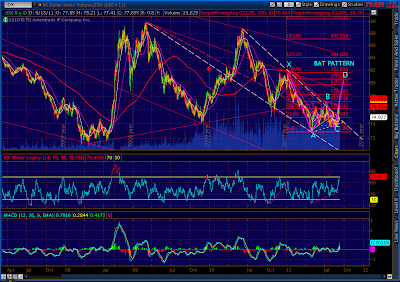 And, back then, the EUR was considered a great alternative to a sketchy dollar. 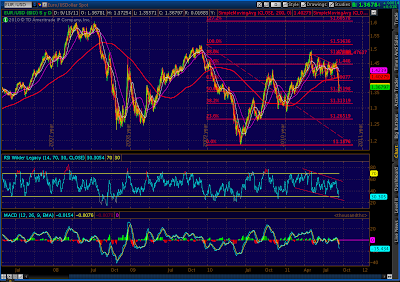 The daily RSI is drawing closer to the trend line that signals ongoing divergence.  The next touch should mark the end of this rally, although it’s possible we’ll stop short.  Also, note we’ve stalled at the SMA 20 at 1176 (the SMA 10 is at 1188, @ the upper channel line.)  And, the histogram is also showing divergence — with a 4th shorter bar in a row to go with the two-day rally. 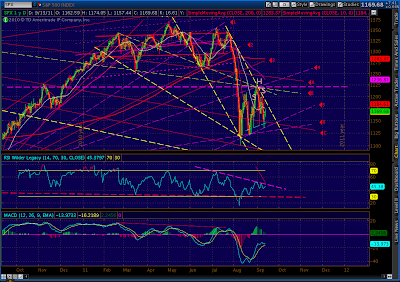 The 60 minute RSI has hit its TL and is working on a nice reversal candle.   I think the rally is either over here or we might go up and tag 1188 first.  Either way, the jig is just about up. 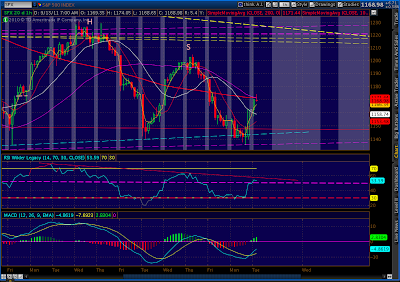 I’m watching credit and currency markets this morning.  Italy just auctioned EUR 6.5 billion at 5.60%, an all-time high since the Euro’s introduction.  Bid to cover was a wretched 1.279.

Hopes that China would come to the Euro’s rescue appear unfounded.  And, French banks continue to hit the windshield at high speed: asset sales all around, BNP rumored to draw no bids from money market funds, and Moody’s downgrades on the way.

Meanwhile, the dollar has traced out a bullish flag, to go with EUR’s bear flag: 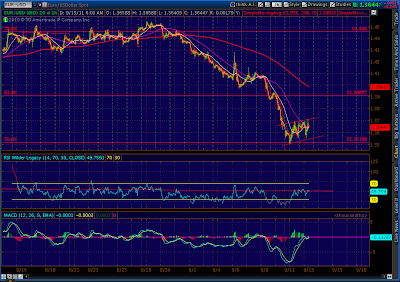 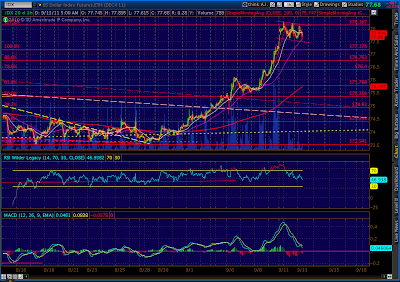