This is not the fix the market was hoping for.  This is not a fix at all.  This is Draghi encouraging fellow central bankers to step up to the plate, and telling the world that he still hasn’t managed to persuade a majority of them to do so.

“In order to create the fundamental conditions for such risk premia to disappear, policy makers in the eruo area need to push ahead with fiscal consolidation structural reform and European institution-building with great determination  As implementation takes time and financial markets often only adjust once success becomes clearly visible, governments must stand ready to activate the EFSF/ESM in the bond market when exceptional financial market circumstances and risks to financial stability exist – with strict and effective conditionality in line with the established guidelines.

The adherence of governments to their commitments and the fulfillment by the EFSF/ESM of their role are necessary conditions.  The Governing Council, within its mandate to maintain price stability over the medium term and in observance of its independence in determining monetary policy, may undertake outright open market operations of a size adequate to reach its objective.  In this context, the concerns of private investors about seniority will be addressed.  Furthermore, the Governing Council may consider undertaking further non-standard monetary policy measure according to what is required to repair monetary policy transmission.  Over the coming weeks we will design the appropriate modalities for such policy measures.”

This could get ugly.  We remain short since 1387, and very happily so at the moment. 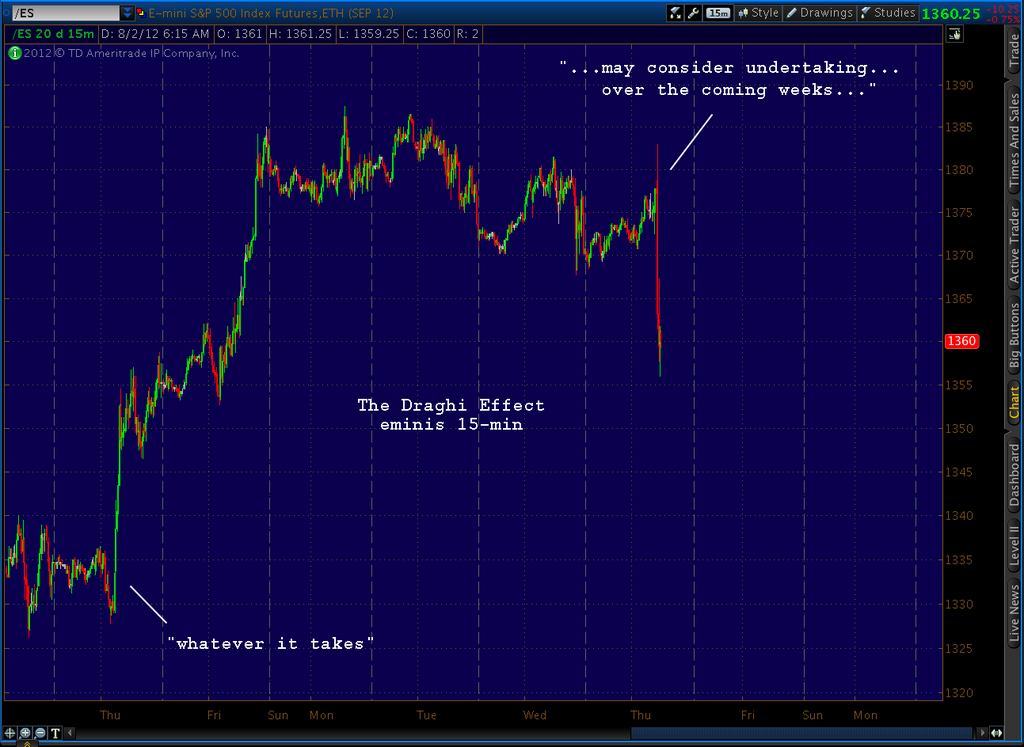 Playing the expected bounce here with some longs at the channel midline/Fib .618 @ 1362.  I suspect the trend is still down, but there should be at least a few points to scalp intra-day. 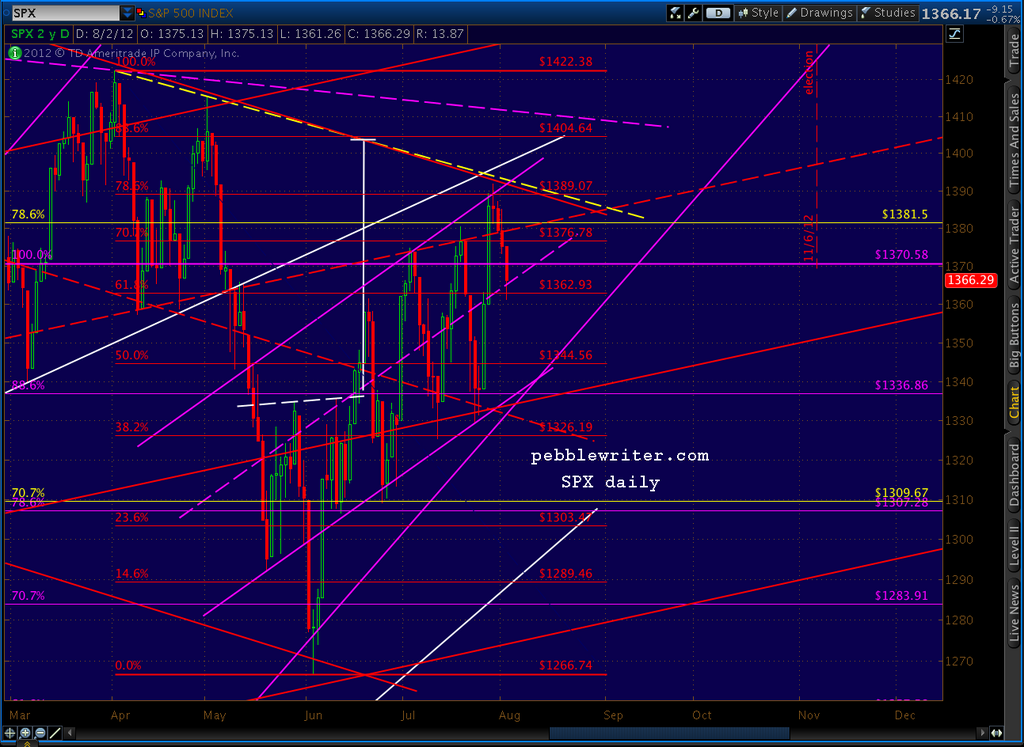 Daily RSI has reached a level of strong support.  It must decide whether it’s following the purple channels up or the less steeply sloped yellow channels up.  It’s also testing TL # 4. 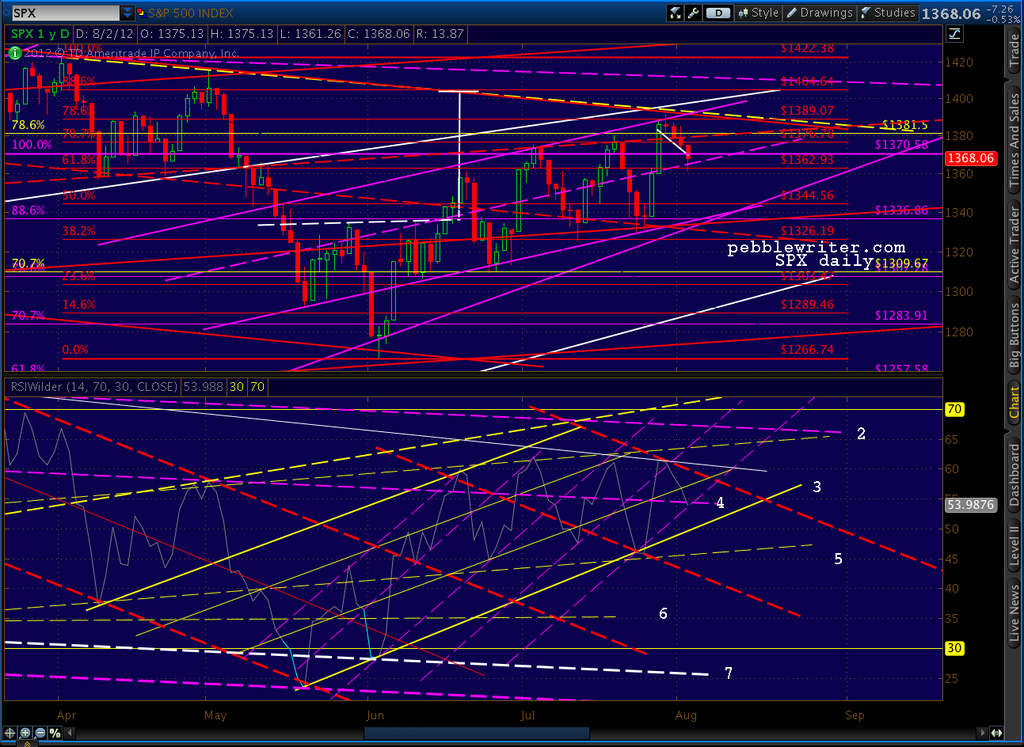 I suspect SPX is going back to test the TL it just broke down from.  The 5 and 15-min RSI look like they’re also heading for a target in the 1371 range.  I’ll consider going short again if we get there. 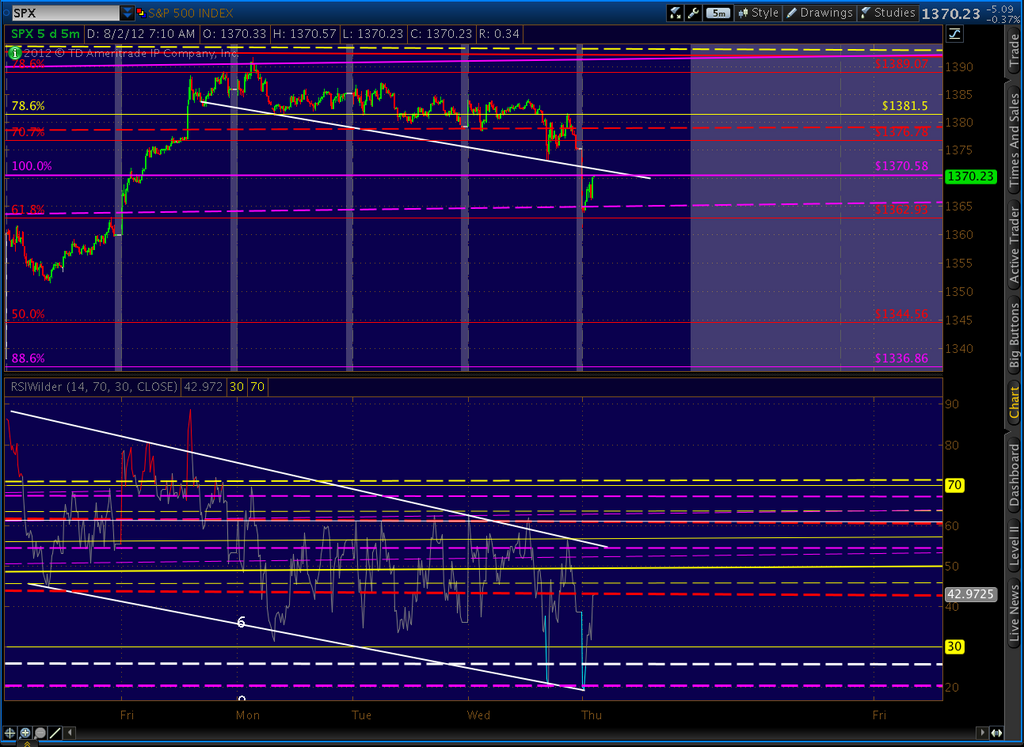 RSI just about quite there on 5-min chart, will wait to see if there’s a reaction before closing longs. 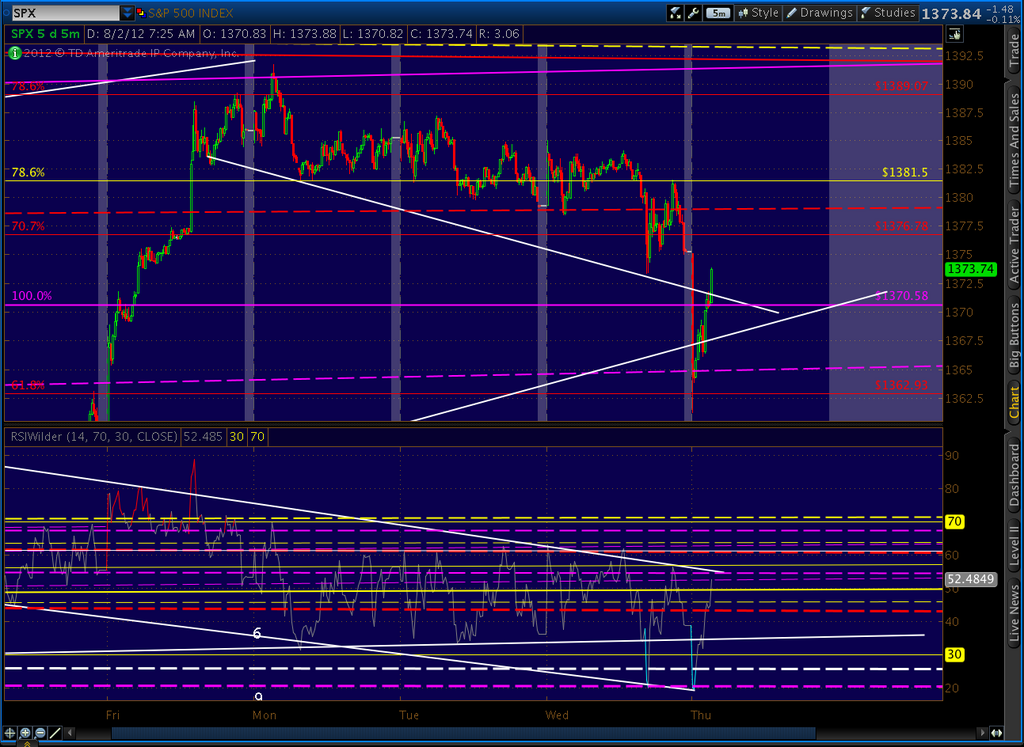 That looks like the full move.  Will resume shorts here at 1373 with a stop at 1375.  There appears to be a channel setting up on the 5-min chart that coincides with the RSI channel tag on the upper bound. 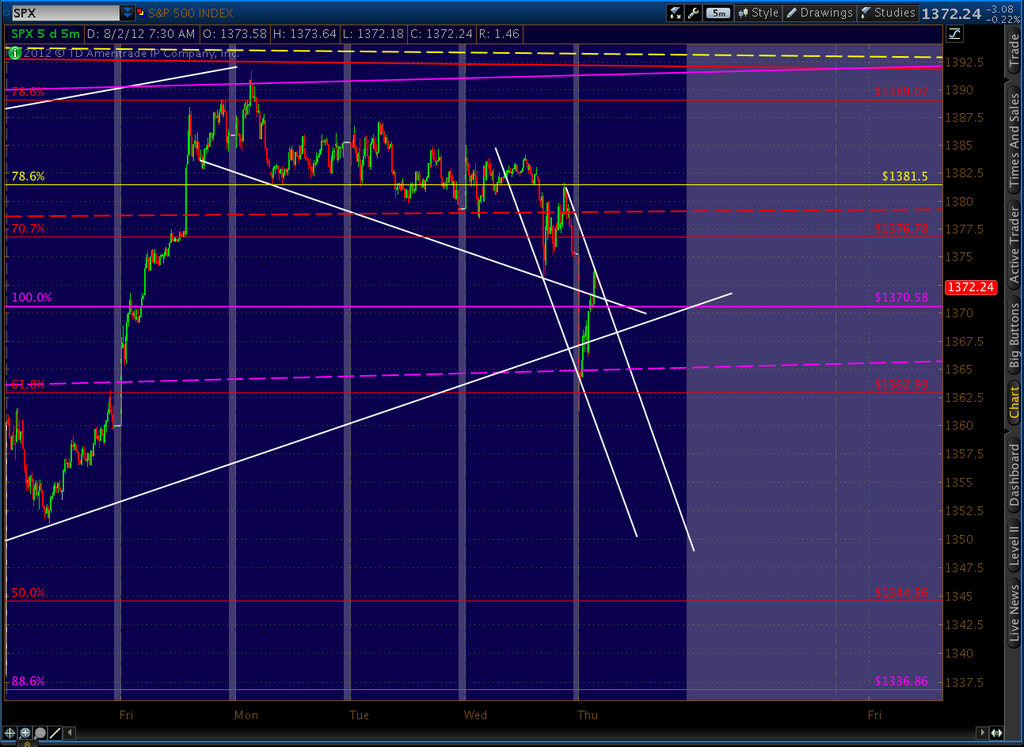 Note how each of the previous RSI TL breaks has led to a drop. 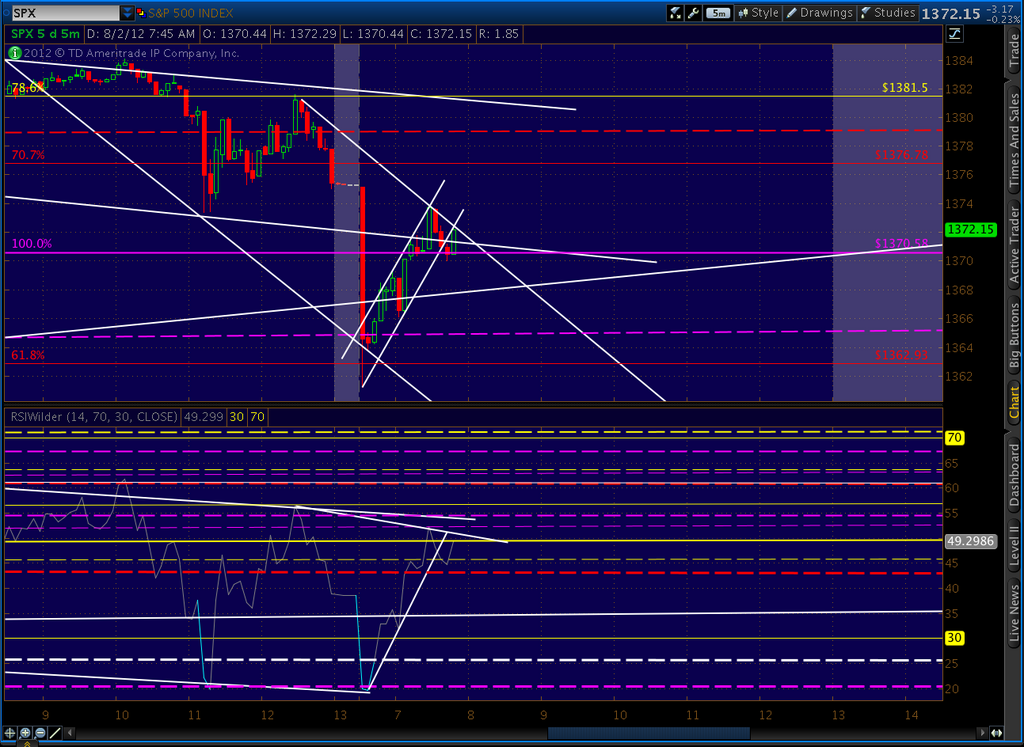 If SPX can break 1361, it should have plenty of downside to cover.  There’s a little channel of sorts on the chart below that might be providing some support here.  And, of course, the bulls are anxious to portray an arrest of this morning’s plunge — along with a higher low to boot. 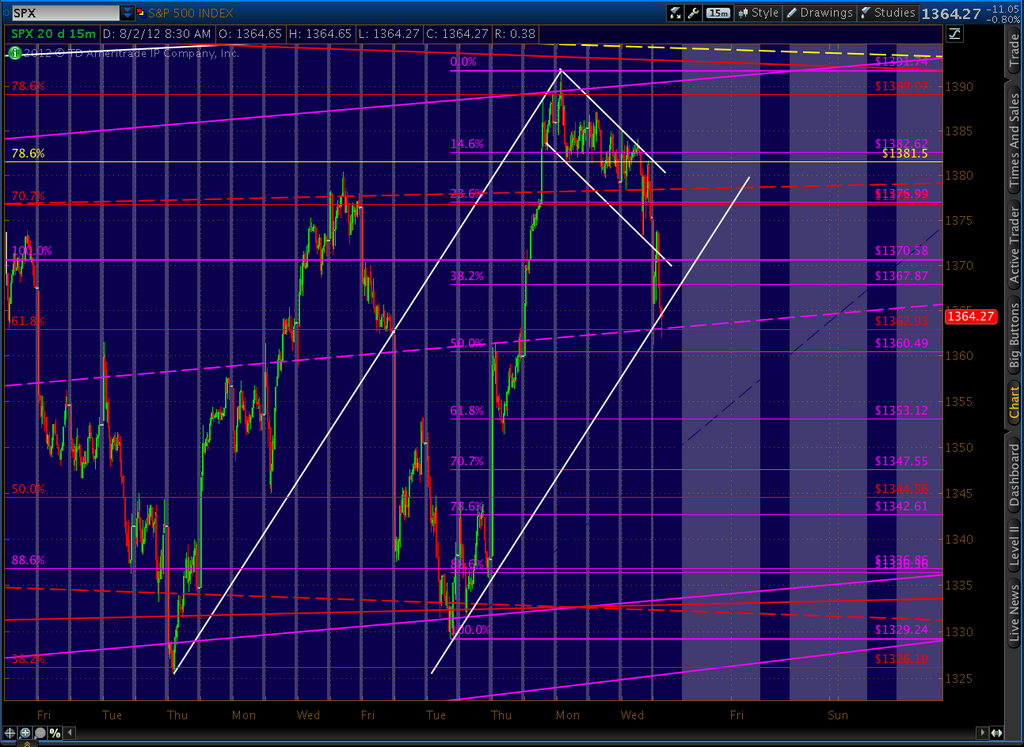 Still holding short from 1373 as sell-off continues.  There is the possibility of a little falling wedge setting up on the 5-min RSI, though it could also broaden into a continuation of the little channel to the downside.

A break out of the little RSI channel and I’ll likely switch sides again intra-day for another bounce.  I’ll also look to see if SPX can retake its previous low at 1361.21.

The four previous patterns have all played by the harmonic rules fairly well.  Referring to the chart below, Pattern A put in a reversal at the .382 – indicating a probably Bat.  And, in fact, we got a decent bounce at the .886.  before prices dropped another 26 points to retest the previous low.  This pattern was the hinkiest, as there were multiple Point X’s that could qualify, but none which presented a better fit to a standard pattern.

Pattern B saw a reversal near the .500 – again indicating a Bat Pattern.  But, then we saw another significant bounce at the .618 — indicating a possible Gartley too.  As it turned out, the Gartley was the correct call as the decline wrapped up right at the .786.

Pattern C was one of those funky Bats that breaks the rules but works out anyways.  The first real reversal we got was the .786, indicating a probably Butterfly Pattern.  However, the pattern wrapped up at the .886 for an unorthodox Bat.

Pattern D is the current one of course.  The .618 is getting close at 1353.12.  I’ll watch for a bounce there, though as the previous patterns have shown there is no guarantee.

The current value of the lower bound I’m using is 1349.

Trying to be patient as things unfold.  We’ve reached another important TL (yellow #3 below) of support on the daily RSI.  This tells me we’re very likely to see at least a bounce at the .618. 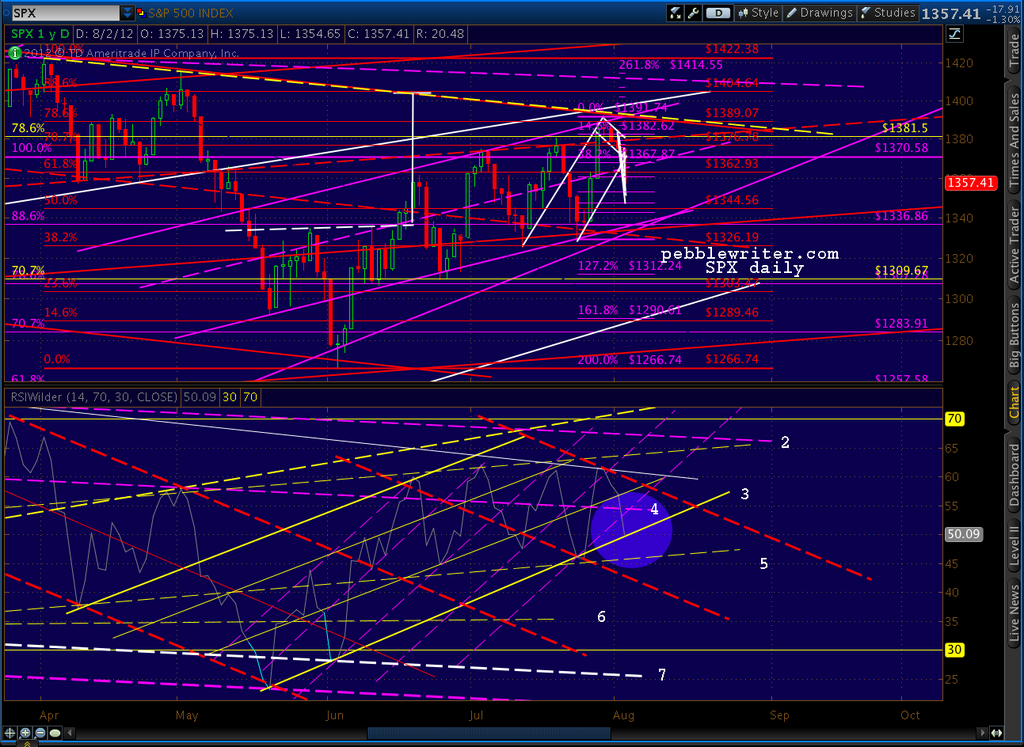 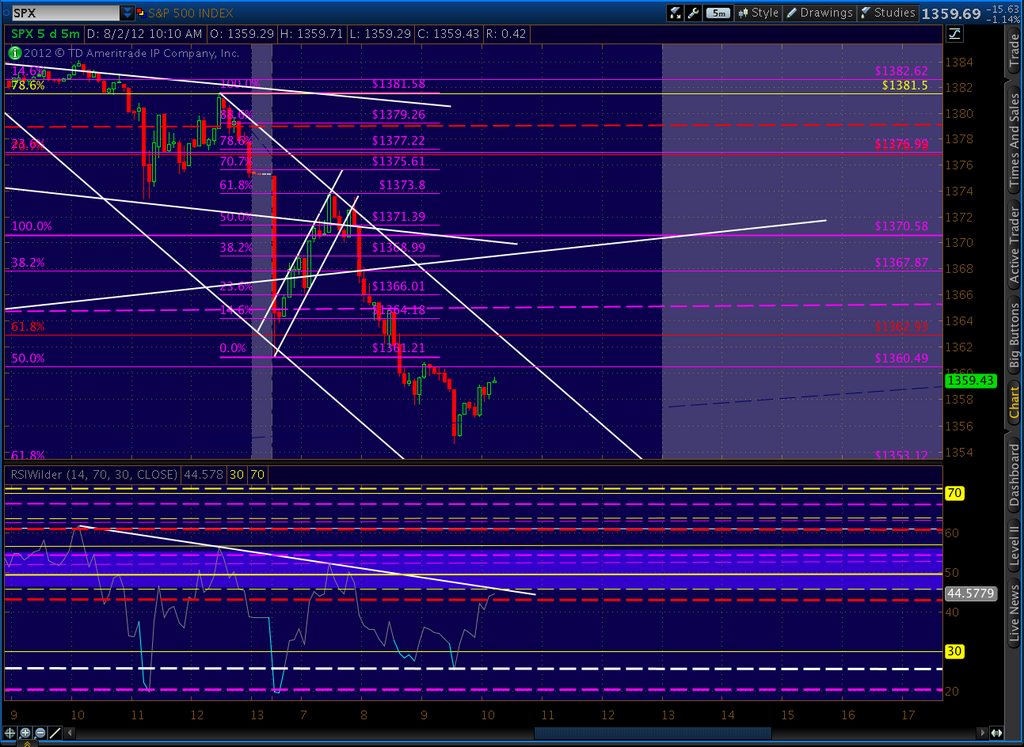 Another way of viewing things — channels in channels.  Looks like a little rising wedge setting up at the moment.  Only another 10 minutes left before 1361 passes out of reach without breaching the channel.  That is, any sideways motion within the little wedge (or a break down) gets us to the far right/upper bound without exceeding 1361 and enable further downside. 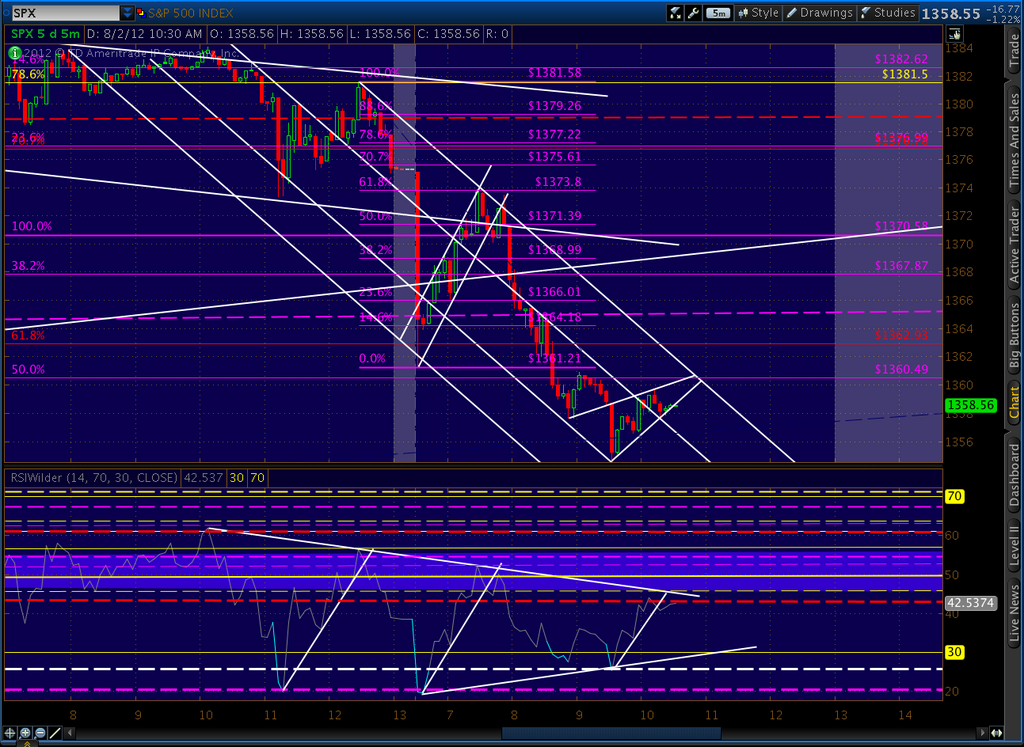 I’m lowering my mental stop to 1360, the level at which we’d break out of the downward sloping channel.  I would be likely to go long again should we break out.  The current stasis can’t last, as we’ll hit the channel wall within the next 10 minutes at this pace.

Note that we’re hanging just below the RSI trend line, and just above the price channel line (the smallest one, which was previously a rising wedge.)  The most likely outcome is a breakdown of the channel and return to the lower bound of the RSI triangle to set up additional positive divergence. 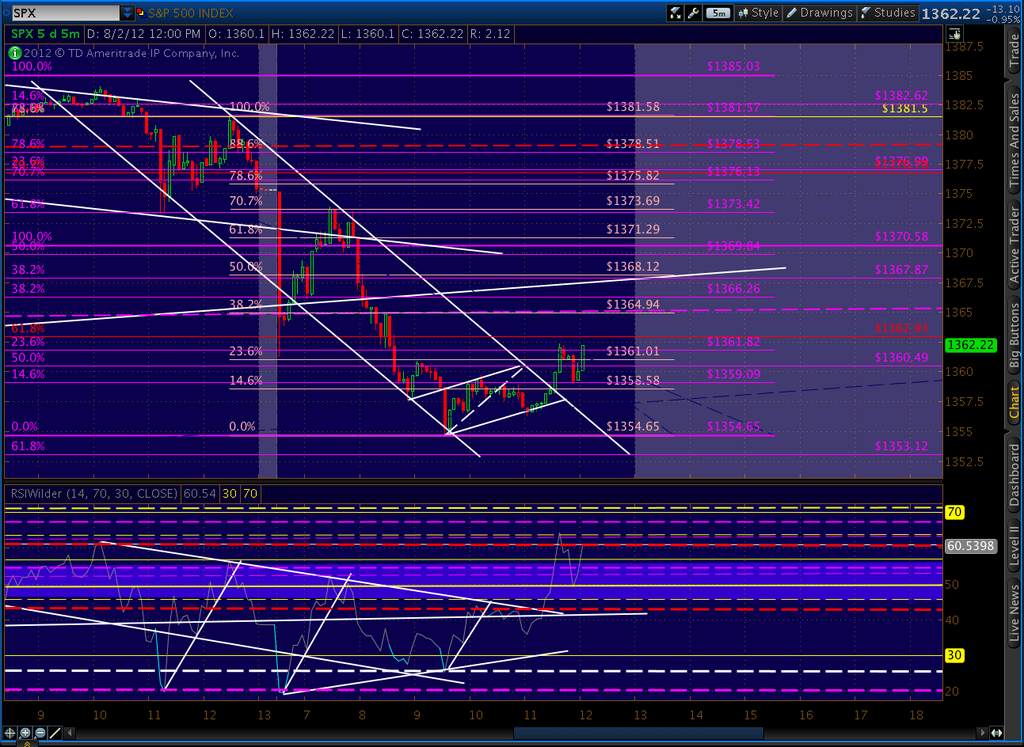 We’re coming up on a channel midline, the .382 of the rebound and the intersection of what looks like a good new channel with a TL — all in the 1365-1368 range.  Would make a nice place for a turn.

I’ll probably cash out for the day and try to figure out the next stage.  NFP in the morning, and that might make a difference.

If I’m not mistaken, we made 54 points today.  I missed a few by not pulling the trigger at 1354 (in pursuit of a 1353 target) but I can live with that.  To me, the hardest thing about investing has always been letting profits run; but, we got all but 6 of the drop since going short Monday — and made a bunch more through intra-day trading.

Thanks, everyone, for the nice notes during the day.  And, welcome to today’s new members.   It’s not always this hectic!   We often go days at a time without trading, let alone multiple position changes during the day.  I certainly hadn’t planned on it; it’s what the market threw our direction.

A few of you report that the SAVE37 coupon (annual membership for $500) is still working.  There’s some kind of hitch over at PayPal, so if you can get it to work, go for it.  Annual memberships will be $800 as soon as PayPal gets it together.

I’ll post more tonight after I’ve had a chance to catch my breath.