Some ideas I’m toying with this weekend…

Parallel lines that seem to do a pretty good job of correlating from one cycle to the next.  This series was established by drawing a trend line from the 2007 to the 2011 top, then copying it and dragging it elsewhere on the chart — keeping the line parallel.

Astounding how often they play a similar role (to their initial role) years later, both in terms of support and resistance.  All drawings are in log scale, by the way. 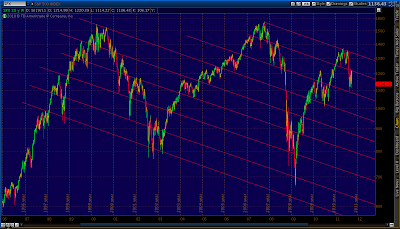 Let’s add some more trend lines, and see where this goes.  This first TL has always fascinated me.  It goes back several decades and does a great job of defining the last three tops. 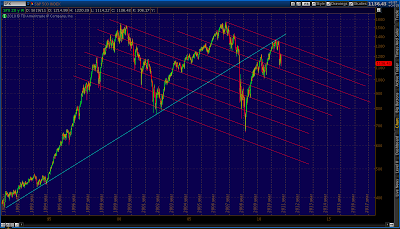 As you can see, it’s sort of a three strikes and you’re out proposition.    The initial fan line (a) stays close to and guides the advance.  The subsequent fan lines (b, c) arrest a decline, only to turn around and serve as resistance for the next backtest. 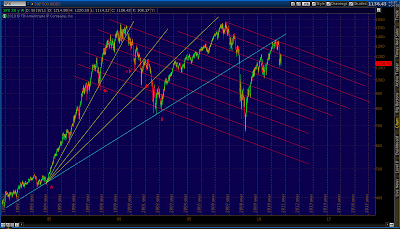 The market reverses after the backtest, then falls 2-3 parallel lines — ultimately establishing a new major bottom.  In this case, the bottom occurs back at our original long term trend line, labelled Point B.

We’ll construct the same fan lines from Point B and Point C, the 2009 bottom.   The last line for 2011 is pure conjecture, but the 2nd looks like a pretty safe bet. 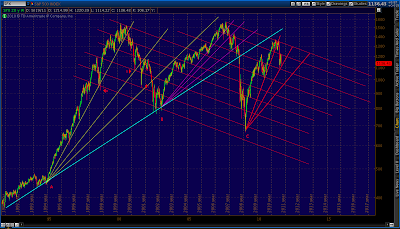 Now, let’s overlay the 2008 market move on the 2011 grid, just for grins.  It’s been working pretty darn well as an analog ever since I first suggested it in May.  It troubles me that Elliott Wave International recently latched onto it, as widespread recognition might just ruin its validity for the rest of it.  Oh, well.

The result might be something like this.  There are many things I like about this chart, and a few that need to be worked out.  I’ll play with it more over the next few days and let you know how it turns out. 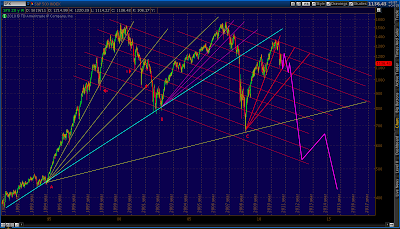