While there is plenty of speculation that this will be the week we experience a flash crash, I don’t think it’s likely.  And, if it should happen, it won’t be the market disaster that many expect — for the simple reason that such severe drops almost always retrace significantly in a relatively short amount of time.

This time could be different, but as a technician I keep my distance from such thinking.  As regular readers of this blog know, I’ve been banging the “all market tops are alike” drum for a while (previous posts here and here.)

As I posted on June 22, I view the current market as particularly similar to 2007 both in terms of the run-up to the top…

…as well as the price action within the top itself: 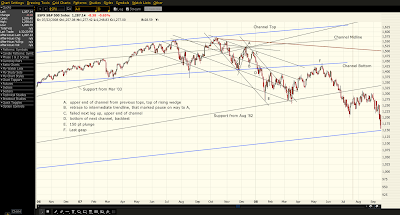 In my opinion, we’ve completed wave 1 of (1) of P[3] down and are in the process of tracing out corrective wave 2, which should take us back to the midline of the channel created over the past four months.  This is a count similar to 2007’s, in which there was also dissension over the initial impulse wave count.

That midline currently stands around 1324 or so.   The simple average of the most recent high (1370) and low (1258) is 1314; but, I’ve been more focused on a broadening channel running roughly parallel to a simple regression channel with boundaries of +/- 2 standard deviations.  My channel is drawn off significant highs leading up to the current pattern and is explained here.

These numbers are very consistent with other significant declines.  I looked at market drops since 1987.  I started with the crash of August 1987 and worked my way forward, setting a threshold of a minimum 7% drop within 35 trading days or so.  I chose the time periods in a rather unscientific way — I eyeballed them.  It’s quite possible I missed some or included some that shouldn’t have been, but the results were fairly consistent. 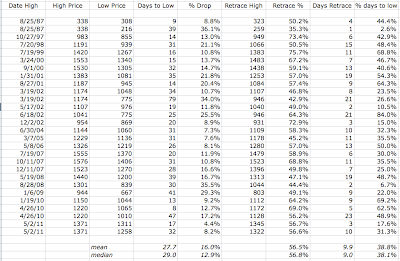 Some of the declines were significant in the short run, then extended on for a longer period.  August 1987 was one such decline, as were March 2002 and April 2010 (I show both short and long periods for comparison purposes.)

If 1258 was indeed the low, the decline we’ve seen since May 2 took 32 days — very much in keeping with the study averages.  In those 32 days, this market lost 8.2% — a little on the low side, but within the study range.  If we perform per the historical averages, the market will retrace to its midline of 1322 within 12 days — or, July 5.

If it plays out as I expect, we’ll have also completed a bearish bat pattern (since 6/1).  The initial price target would be the .618 retracement, or 1297.  And, a continued decline would complete a huge H&S pattern indicating downside below 1200.  But, we’ll deal with that in the coming days if the pattern develops as I suspect.

The one thing this study doesn’t spell out is whether 1258 was the low.  This could be one of those 35-day patterns that loses 20%.  But, I don’t think so, but we’ll know in the next few days.  Just know that, if it is, we’ll bounce back accordingly before diving straight for 666.

Can we retrace 54 points in 5 days?  Sure.  We’ve had two 20-point days in the past 9 trading sessions.  And, most technical indicators indicate we’re somewhat oversold (more on that later.)  The market seems very news-focused lately, so I suspect a positive trigger relating to Greece, the Fed, the debt ceiling or economic indicators expected out this week.  Also, Friday is options expiration for the quarterlies, so keep an eye on OPEX related anomalies.

I’ll try to update the technical picture before the opening tomorrow.  In the meantime, plenty to think about.