Any CDS experts out there?  If the Greece “haircut” isn’t deemed a default, then it calls into question the value of credit default swaps.  Depending on who you ask and how you measure them, there are $2.5 – 600 trillion of these (possibly worthless) things floating around — some presumably on the balance sheets of already under-capitalized banks.  Are they marked to market or carried at cost, where plunging value will further inflate banks’ hidden liabilities?  If you know a little something about commercial or I-bank accounting, let us hear from you.

Wild day for stocks, today; just as wild for bonds.  Remember ZROZ, the Pimco zero-coupon ETF we talked about a month ago?  [The Forest and the Trees]  At the time, it had completed a huge Crab pattern that portended rough times ahead for long bonds.

We talked about what might presage a 20% price decline indicated by the Crab pattern:

The portfolio’s duration is 27.79, so a 20% decline in prices would indicate a yield increase of 0.72%.  Anything could happen, but a .72% increase in long bond yields would hardly be beneficial to stocks.

Of course, other factors can drive down prices — credit quality, for instance.  We are talking US treasuries, after all.  And, let’s not forget currency fluctuations.  A crash in the dollar wouldn’t do much for the value of long-duration dollar-denominated assets.

The 20-yr yield hit 3.18 today, up from 2.79 on 9/29.  And, we got a pretty significant sell-off in the dollar, courtesy of a 2.45% single-day move in the EUR/USD.  While I expect the EUR/USD to reverse sharply, the interest rate bump is likely here to stay (we’re only half way to our .72% targeted increase. ) And, as we noted back in September, such a development is hardly constructive for stock prices. 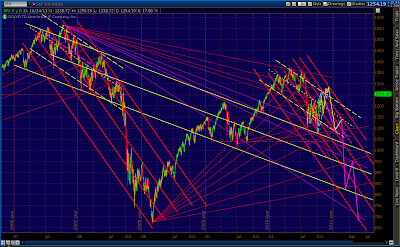 The ones I drew in here are parallel to those in 2008, but the spacing of the last two to the right involve speculation on my part that they would follow a similar pattern as each of the preceding channel lines.

Note that since they have a steep slope, the point at which the market intersects them is a function of the time involved to get there.  In other words, the fact that we’ve reached the channel line so quickly has allowed us to reach it a higher price than would have been the case had we, say, taken the time to form a more pronounced B wave (a scenario I haven’t completely given up on, BTW.) 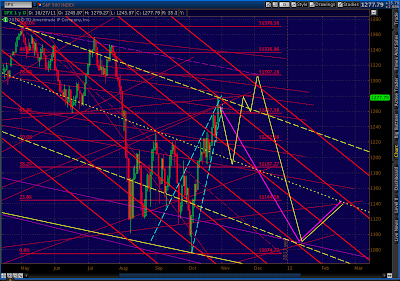 As can be seen from a close up of the daily chart, intersecting the next higher channel line now, for instance, would take us to 1332.  While, an intersection on Nov 21 would result in a price of 1307.  There’s no guarantee that we’ll even reach it, as we have reached the outer boundary of the larger (yellow) regression channel.  But, I don’t feel an overshoot is problematic, seeing as how we diverged pretty strongly below it in early August. 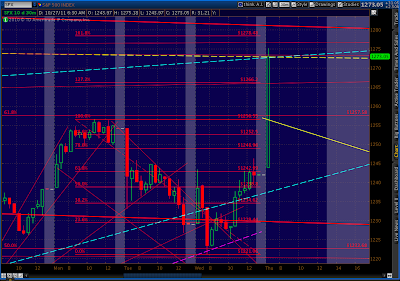