More looks at the harmonic picture for SPX: 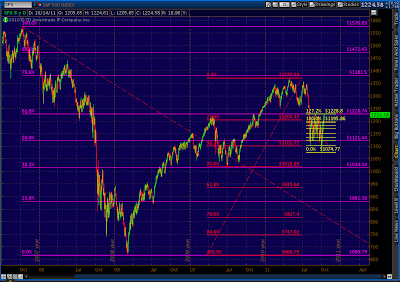 Note that we’re right at the .618 Fib from the big Gartley: 1228.  That also happens to be the 1.272 extension for the Butterfly pattern we’re within spitting distance of completing.  Coincidence? 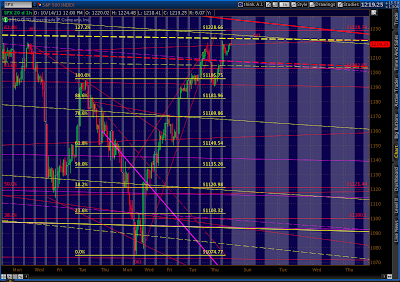 And, the dollar chart to go with it.  I’m thinking the last leg up might be just [i] of 3, instead of 3 itself. 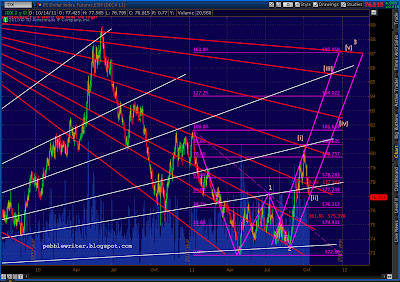 I can’t for the life of me figure out what’s keeping equities going.  All the signs are there for a huge plunge.  And, as extended as this thing has become, it should be dramatic.  And, it could happen any minute…or a week from Monday.

The timing is difficult, because the bull has overstayed its welcome.  I would expect a more rapid move back down, but I’ve thought that for days, now.  I’ll work on it more over the weekend.

Look what the great and powerful Oz has up his sleeve.  I haven’t seen very many charts this compelling lately.  Fan lines rule! 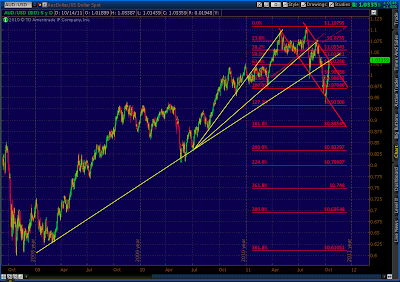 Note how decisively the fan and channel lines intersect at the key turning points. 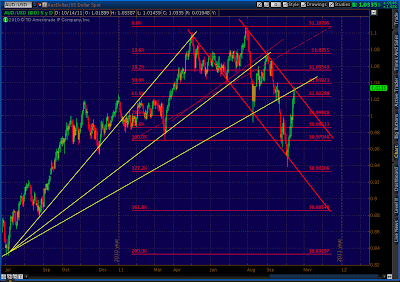 I don’t think there’s much doubt we’re about to see a massive downturn any day now.

I’m also watching AAPL, which just completed a Bat pattern with its gap up and is working on one of several bearish candle patterns.  Check AAPL’s RSI, too. 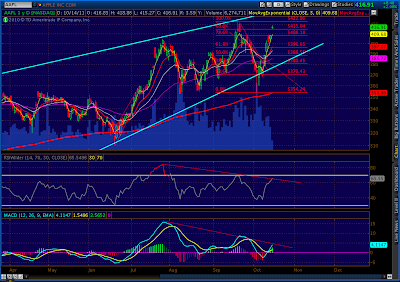 Look for this run up to crap out at the same fan line that stopped the Aug 31 and Sep 1 moves — currently around 1220.

The last time we had a pattern set up like this was Sep 16, 19 & 20th, when we formed a double top with the same huge negative divergence and same three candles.  If this gap craps, we could see a similar reversal to the 1.618 on the downside — in this case 984. 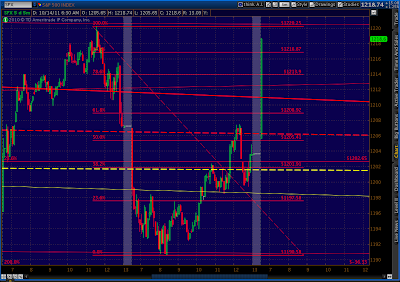 Spud put a question to me yesterday regarding the proper wave count.  There are so many different theories that have been proposed by people much more experienced than I —  It’s times like these that make me want to ignore EW all together!   Seriously, I’ve lost more money trading some expert’s count than any other single source of information (e.g. EWI’s silver forecast?)

Having said that, I think EW can be extremely helpful in raising questions about possible next moves, and is certainly helpful in trying to ascertain where in a larger pattern we might be.  It’s just that right here, right now, I can point to five competing counts — all perfectly logical — that could be right.  The only sure thing is that 80% of them are wrong!

So, I’ll throw my count into the ring:  an expanding ending diagonal.  It’s rare, but it seems to fit with what’s going on.   Guess we’ll find out soon.