Well, that was exciting.  Not!  Everything mentioned at 1:05 is still the case and, at this rate, will be the case for weeks to come.  I believe it was just too much to ask the market to maintain the strength of this morning’s rally in the face of the negative economic news, the American Airlines BK, conflicting soundbites from Fed members and Euro-gnomes, and incendiary iPhones.

VIX continued to slip, having yesterday completed its backtest of its triangle. 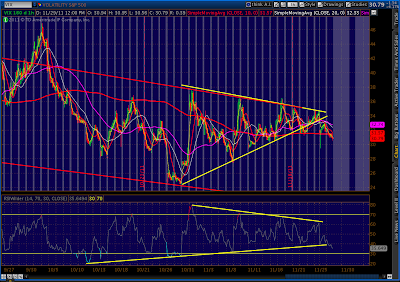 To me, DX continues to look like it’s backtesting the rising wedge it fell from yesterday.  Although, EUR/USD appears to be back in its falling wedge.  Hmmm….  Possibly just a divergence, a distortion the normal relationship between these two. 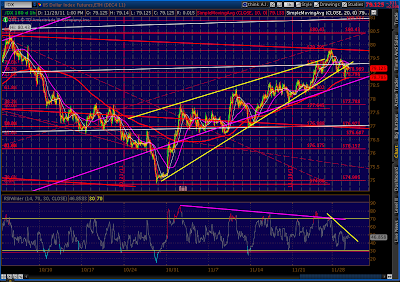 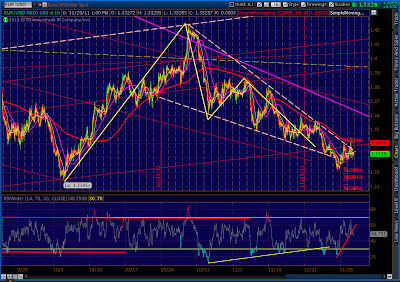 Last, a quick peek at NDX shows it’s working on its own IHS pattern.  Six points to the upside would complete, and possibly add another 3%/75 points of payoff. 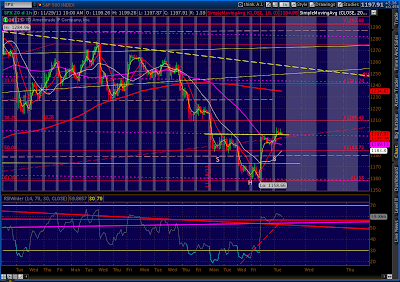 …and, note the RSI trendline — should offer support for the next leg up. 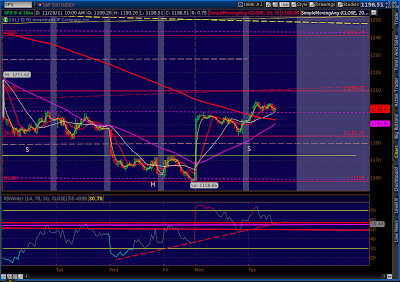 The Inverse H&S I mentioned yesterday just completed.  The upside is 40 points or so, making it 1238. 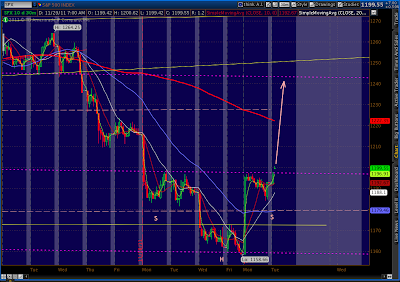 There are a couple of obvious targets for the termination of this wave. 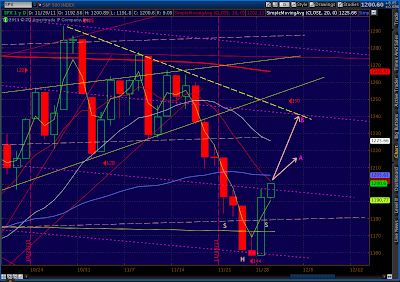 Point A is 1215, the Nov 1 low that fits most of the EW counts I’ve seen.  Point B would create EW “problems” but fits from the standpoint of the channels that have guided much of the past nine months as well as a TL off the recent highs. 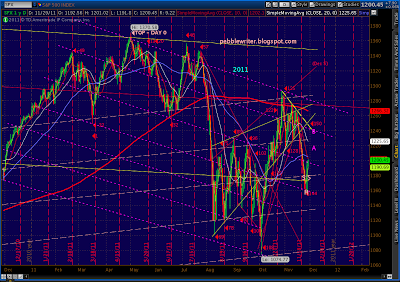 If we count the 1292 high as A of wave 2 instead of the completion of wave 2, it opens up lots of higher possibilities which I have discussed at length over the past week or two.  We’ll revisit these if/when they come into play, but the highest point I can see making a lot of sense is the 1307-1313 range.

Remember, anything above 1292 would merely be completing a wave 2 — not a bull market resumption.  The trend is still down, and I see nothing on the horizon to change that. 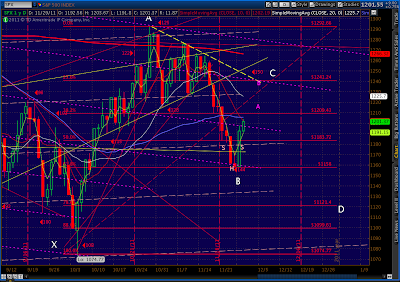 Note that Friday’s low completed a .618 Fib retrace of the 1074 – 1292 run, meaning it’s a very likely candidate for a Point B in a Gartley pattern.  A typical Gartley would put in a Point C somewhere between here and 1292 (points A or B from the top chart would do nicely) then drop to the .786 Fib level at 1121 before reversing again.  We’ll keep an eye on it.