Not much action during the day, but Apple’s making news after the close.  According to unconfirmed reports, Apple is purchasing the other 499 corporations comprising the S&P 500.  Said CEO Tim Cook, “imagine my surprise when I learned there were other stocks out there; this will simplify things for everyone.”

In after-hours trading, AAPL is indicating 452 after trading as high as 469.  The only FLi in the ointment is a bearish Crab pattern that completes around 465.87.  AAPL has been locked in a crazy steep channel since 2008, and 469 tomorrow would complete the Crab and take it north of the channel boundary.   Here, for your iZonely. 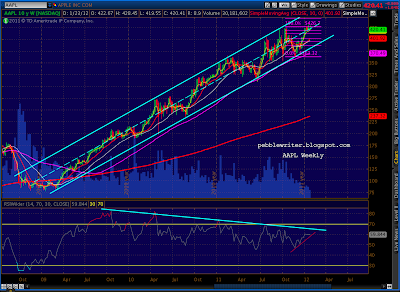 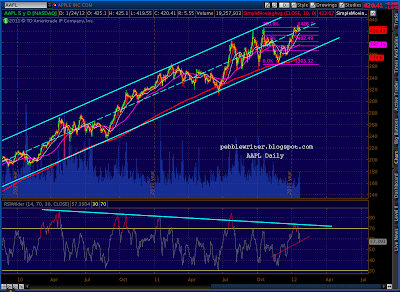 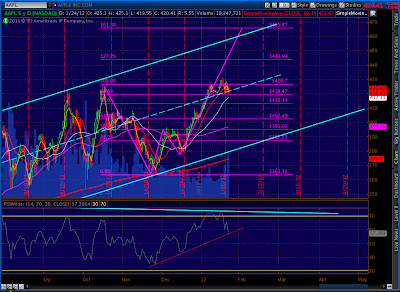 It’ll be interesting to see if RSI tags along for the ramp, or whether it falls victim to its two year-old trend line.  If so, could get some nice negative divergence.

This should also give NDX the last little push it needs to meet its bearish Butterfly target at the trend line we’ve been watching.   Almost there… 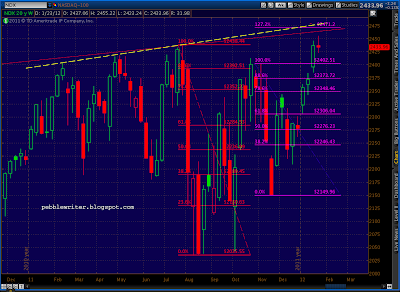 Another day, another broadening of the rising wedge.  We’ve had three RW failures in a row, so it’s normal to be a little gun shy at this point.  For now, my target remains 1329. 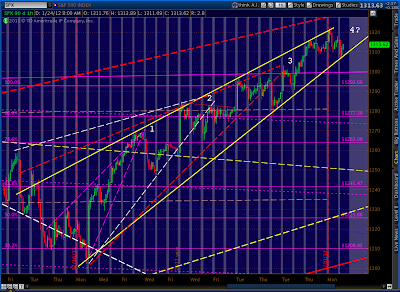 We completed a little H&S pattern that points to 1297.60 — the broadening I was alluding to yesterday.  If it plays out,  though, it’ll be in line with the intra-day lows on 12/21 and 1/13 and look suspiciously like a channel.  It might also appear as a “back test” of the wave ending at 1292 — in other words, a corrective wave rather than an impulse down.

Going out on a limb here, but I don’t think the MM’s are done jerking us around.   I’m watching a lot of indicators, but one that always speaks to me is RSI trend lines.  Check out the 60-min chart. 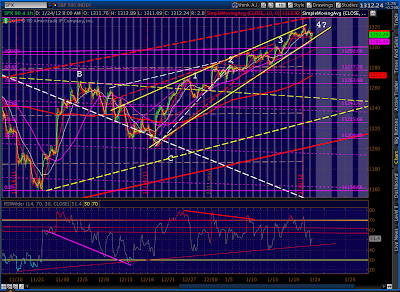 The trend line connecting the RSI lows since November 21 has stopped every downturn since from becoming more serious.  I would think twice before loading up on shorts until at least that trend line is broken.

I would also tell anyone going long or short here to make careful use of stops.  The game is just about up, but there is plenty of danger in taking an unprotected stand one way or the other.