We’re seeing a little weakness on SPX, off 5 after topping out at 1322 earlier.  We got within 7 pts of the Crab objective and, depending very much on how you draw it, possibly tagged the Oct 2007 fan line.   Those who want to capture most of the move down are already short by now, while those who want to nail the top are probably scaling in. 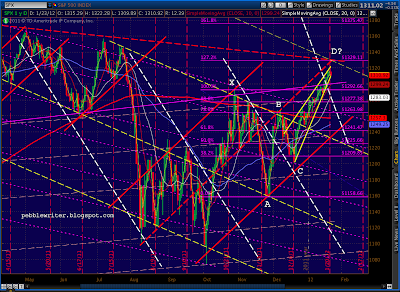 As always, we won’t know it was the top until after the fact.  But, my best guess is still 1329, with a possible dip on either side just to fatten out the rising wedge into a channel.  Here’s what I mean: 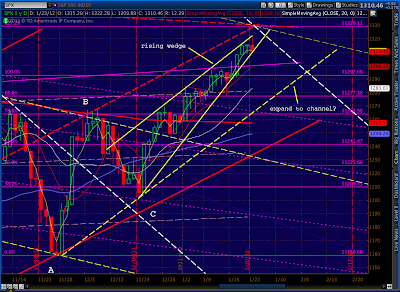 We’ve been faked out multiple times on the way up playing rising wedges.  Every time we complete a perfect looking one, it expands into a channel and begins a new, less perfect wedge — the better to suck more bears into the game.  Right now, it’s looking pretty good.  And, we’re obviously approaching the fan line (however you want to draw it) and horizontal resistance.

I think the MMs will likely allow a little dip just to excite those of us who are looking for a break down from the wedge, then reverse it at a point where it’ll take on more of a channel look.  Whether they do this before or after 1329 is anyone’s guess, but I think it’s coming.  The only positive is that it will very likely establish some nice, fat negative divergence — a signal that’s been AWOL on the daily chart. 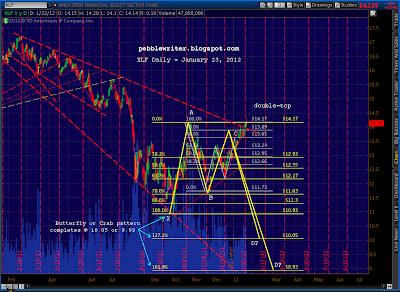 BTW, XLF just busted one of the harmonic patterns we were watching.  By exceeding 14.17, we have a Point C higher than Point A on the Butterfly/Crab.  Although, as discussed last week, I’ll usually wait for a more sizable excess before calling it quits.  After all, 1.0 is a Fib level, and we only reached 1.037.  Could we reverse quickly?  Sure, take a look at BAC.

I hate to kick a stock when it’s down, but in BAC’s case I’ll make an exception.  It’s forming a double top as it back tests a falling wedge and, so far, has failed to breach a TL from 2006. 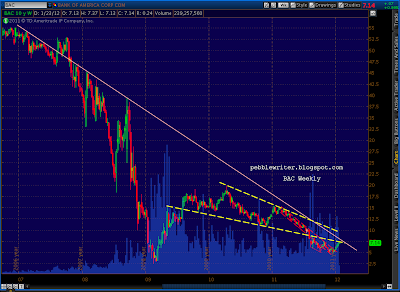 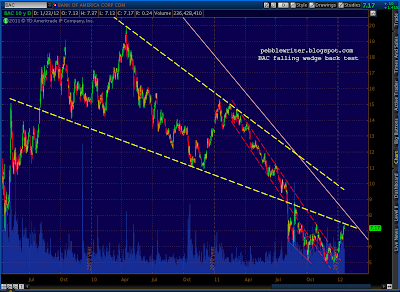 AUDUSD has slightly overshot our Gartley and Crab pattern objectives and seems to be leveling off.   This should be it for the upside, but always remember to use appropriate stops. 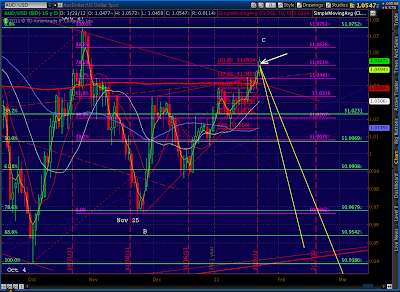 EURUSD has broken out of the very tight channel it’s been in since mid-October.  I’ve adjusted the fan line from the July 08 high (highlighted in white) to reflect the turn at and am looking at the next fan line higher (highlighted in purple) and/or the previous wave low at 1.3145 to provide the next turn. 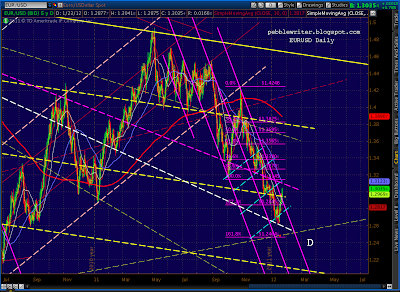 Note that this would complete a back test of the last diagonal on our stair step lower and probably tag the SMA 50, too. 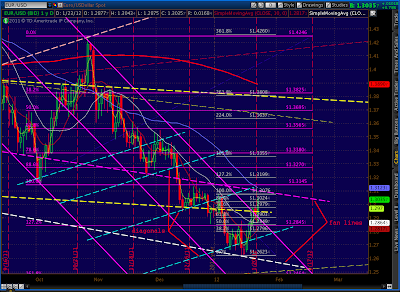 Any time we break out of a channel, it’s a good idea to reexamine the channel and any related underlying assumptions.   Initially, I wondered if we were seeing an expansion of the channel — much like occurred in Mar 2010 (in the middle of the middle impulsive channel (purple) below. 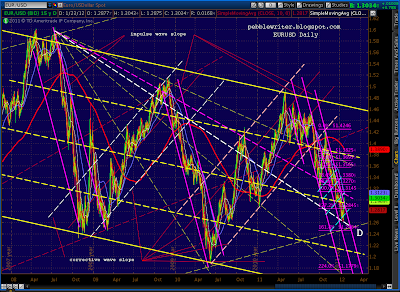 I was disturbed that we were seeing a sizable bounce prior to reaching the fan line off the 2002 low.  I was also having trouble reconciling a breakout from an apparent falling wedge.  When we look at the same chart in log scale, however, we see a perfectly nice touch on the fan line (redrawn in solid red) and the channel is still very much intact (using the 2008 impulse channel slope as a guide.) 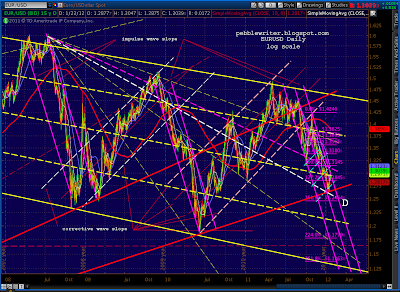 Curiously, in log scale the last fan line provided a bounce on the downside but not the subsequent rise.  In arithmetic scale, it provided no bounce on the downside, but a big one on the way back up.  I can only surmise that the algo’s driving much of the EURUSD trading out there watches both.  So, I will too.

I examined this with respect to the equities market in an earlier post [see: To Log or Not to Log] back in October, and determined that using log scale was part of the reason I was often early.  I think the best approach is to use log scale for longer term patterns (a 9-year fan line qualifies!) but confirm with the arith scale before doing anything crazy in the short run.  That still seems to be the scale most short(er) term equities traders use.  Here’s the daily chart close up with log: 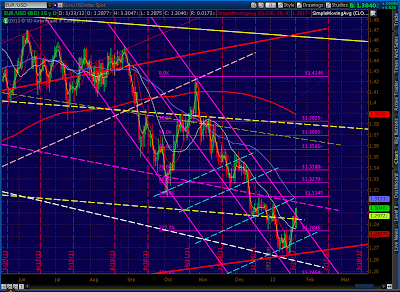 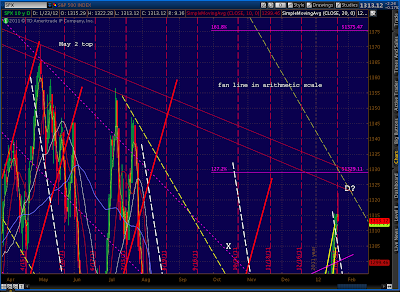 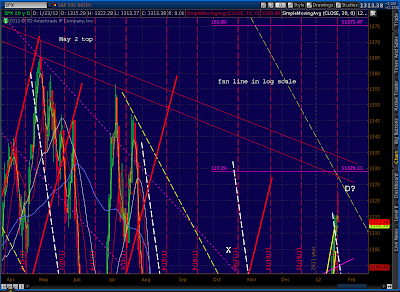