Taking another look, I’m reiterating the post below.  DX completed a small Crab (purple) that’s been setting up since Nov 25 and should now reverse.   However, there’s a larger competing Crab pattern (in red) that started on Oct 4 and completes at the 1.618 at 83.872 — a 3.77% increase over current prices. 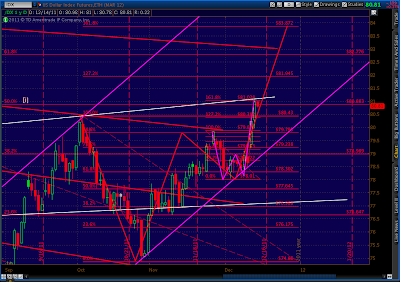 To further complicate matters, DX also reached the .50 Fib retracement of a larger Crab pattern (it began June 2010 at 88.905) as well as an important fan line. 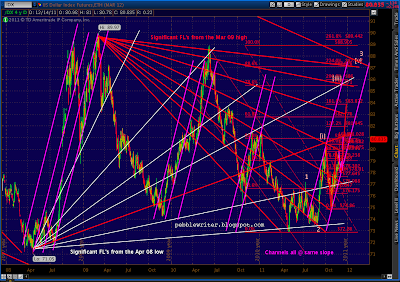 Notice the white trend line coming in from the left and connecting today’s high with the Oct 4 high.  This is actually a fan line off the Apr 22, 2008 low of 71.05, further underscoring the possibility of a reversal here.

So, summing it all up, there’s a pretty good likelihood of a drop in the dollar to as low as 78.79–79.238 over the next day or two, followed by an increase to the 1.618 at 83.872 for a nice bullish weekly candle (although there’s no requirement for a big pause or reversal. ) The finished product would look something like this: 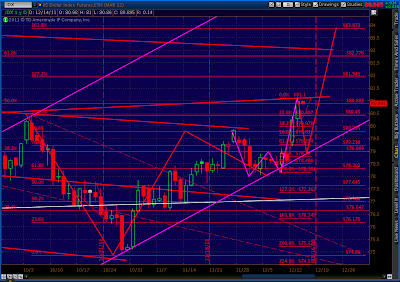 Thanks to Bettlejuice for correctly pointing out the inverse H&S pattern on DX.  We recently completed the neckline, and the objective target is around 87-88 — the same as the presumed Bat pattern mentioned above.

Still traveling, but just a couple of quick observations.

Watching an alternative, steeper channel (in white) than the already steep yellow one that’s been guiding prices lower.  This one could get us to 1200 by tomorrow, but I’m leery of an unbridled downside with OPEX right around the corner. 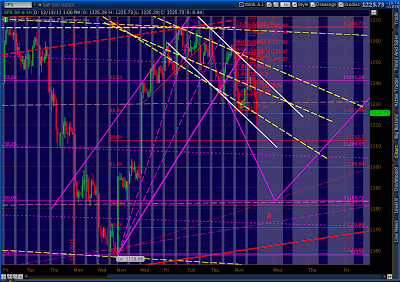 We’re getting pretty close to the 1.618 extension on the downside, so we might be due for a day or two of consolidation before the downdraft resumes.

Speaking of downdrafts, EURUSD did exactly what we expected today — tagging its 1.618 extension of the Crab that’s been setting up since Nov 25.  Again, a little consolidation is to be expected, unless things come completely unraveled. 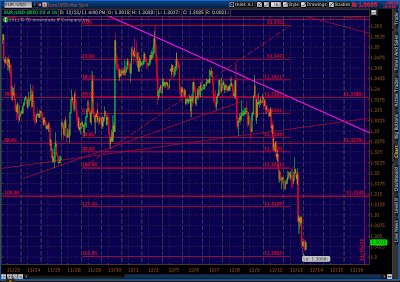 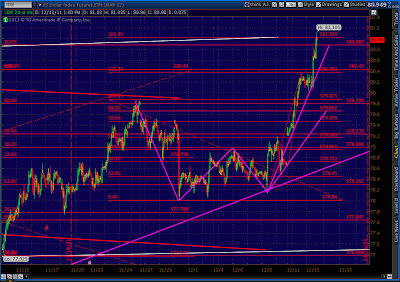 Possible crab setting up on DX at the 1.618 extension. 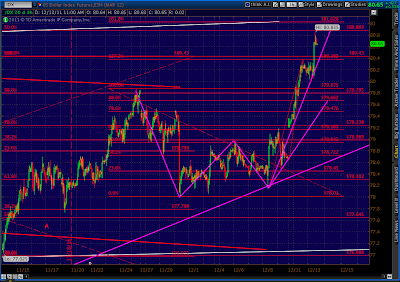 On the other hand…

SPX hit its .618 intra-day, with a possible .786 ahead to complete a Gartley at 1247.  Seems like the Fed is content with current rates — possible disappointment over no accommodation?  Should bring downside pressure. 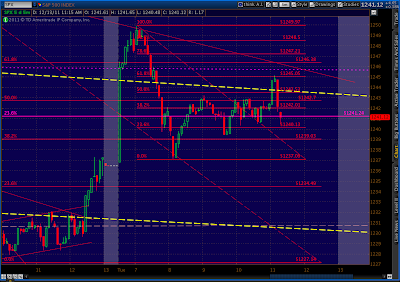 Off to Venture Summit Silicon Valley, so won’t be able to post later today.  As discussed earlier, it appears the upward momentum at the tail end of yesterday still has some juice left — based largely on less suckish sentiment data out of Germany.  Retail sales came in ugly.  Soon, there will be no place for the sad truth of this ongoing recession to hide.

Futures are indicating an increase of 8 pts or so.  That would put SPX at 1245ish on the opening, with the .618 retrace up ahead at 1246 and a (purple) channel line of resistance at 1248.  The channel (yellow, dashed) that’s so far contained this drop maxes out at 1254, so that should be our max upside unless there’s a break out. 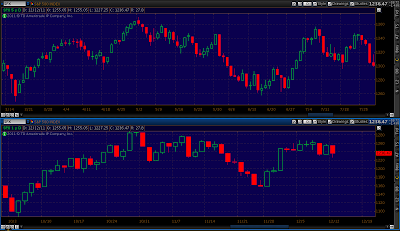 Channel (yellow, dashed) holding nicely, as is the descending broadening wedge.  We ended the day on an up note, with the momentum favoring a return to at least the channel midline. 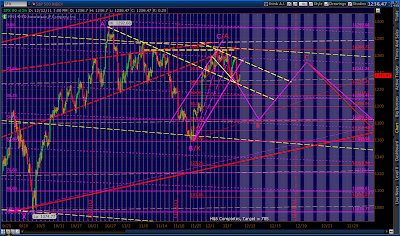 But, take a look at the fan lines from the 1158 lows (purple, dashed.)  Each, when broken, has been back tested in a meaningful way.  A tight backtest of the fan line broken yesterday would reach only 1250 or so — somewhat short of the top of the channel/wedge. 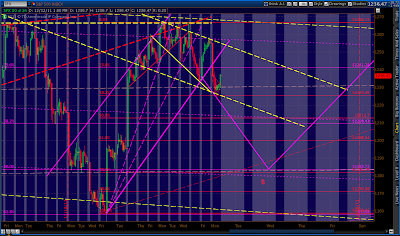 On the other hand….. Like the previous moves, we could get all the way back to a .886 Fib retracement without breaking free on the upside.

EURUSD behaved as expected today, falling strongly within the channel.   The next move should be a continuation to the 1.618 Fib extension at 1.2464.  But, it’s entirely possible we’ll rebound to the .886 at 1.3270 first.  We hit a previous low, making a double bottom of sorts, and the market might take a day or two to digest. 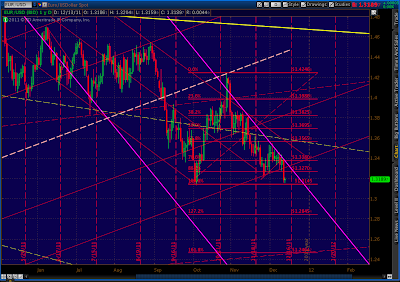 Lots being written about the lack of confirmation from VIX yesterday.  It was down .71 on a day when the SPX was off 18.72.  Very strange.

However, we saw this in July — a lack of confirmation of the actual risk the market was facing.  It’s clearly in a falling wedge, so the next move should be up (although it could drop a little more first thing in the morning, first.)  It just remains to be seen what the time frame is, and whether we’ll have one last little spurt up to 1307-1313 first. 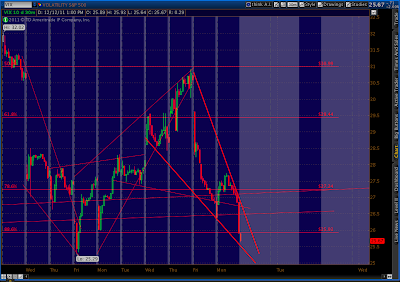 A reminder, OPEX is coming up Friday.