As we embark on the very last upleg of this topping pattern, it’s worth a reminder that we trade in a heavily-leveraged environment.  Furthermore, it’s leverage that already doesn’t work at interest rates of 1.5%.  What happens if markets decide 5% or 8% is the more appropriate risk-adjusted return?

We have a multitude of negative indicators staring us in the face including an obvious economic double dip, moribund employment, unsustainable debt and the abject lack of political will to do anything other than further enrich the greedy bastards who led us to this place.  The key factor in the market’s rally since the summer of 2010, quantitative easing, will be increasingly difficult to institute — not to mention increasingly ineffective.  But, that won’t stop the Fed from trying.

While gold and silver would normally rally in a QE environment, they are subject to huge declines if massive stock selling ensues.   We can argue all day about whether owning gold coins will make sense in the post crash world.  But, in the meantime, don’t count on your GLD and SLV shares to protect you from the turmoil. 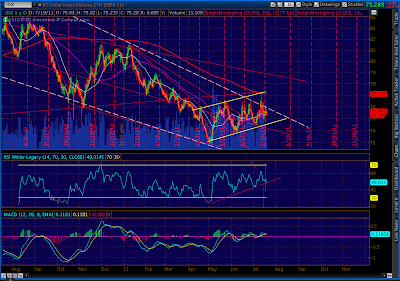 USD futures (DX) are tracing out a return to the lower end of the channel they’ve been in for the past three months.  We broke out of the falling wedge, but the rally failed on last Wednesday’s stock market action and we’re back below the upper trend line.  The same thing happened to the downside last October.

As the above chart clearly shows, DX is about to be forced out of the channel or the falling wedge.   I expect stocks to start down in earnest in the next week or so, and DX to break strongly out of the wedge at that point.  A reminder as to what that looked like in 2007: 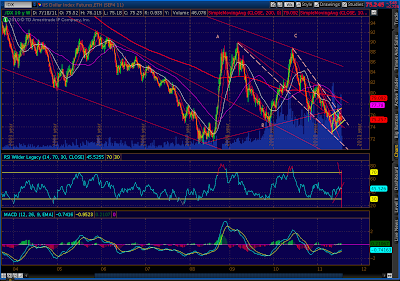 The harmonics picture is a bit muddled.  While we’ve completed A, B and C and D of an obvious pattern, it’s neither fish nor fowl.  The B retracement of .786 is typical of a Butterfly pattern, but the current D point at .886 of the XA leg is typical of a Crab.  The typical Butterfly D leg would be at least a 1.27 extension of the BC leg, or about 69.8.

While there’s no reason we must complete a valid pattern, it’s puzzling that we’d come this far — tracing out perfect Fibonacci retracements all along the way — just to abandon the pattern at this juncture.  The coming crash will be a pretty impressive wrench in the works, so maybe we should leave it at that.  On the other hand, I wonder if greater weakness awaits the USD after the initial runup.

With EUR in the same — if not worse — mess as we are, it’s hard to imagine that there’s a better currency alternative out there.  But, with depression and constructive default just around the corner for the US, who would question the need to hit the big, red reset button and bring asset values and underlying debt back into sync?

I guess my bias is showing.  I believe that equities are due for a strong downdraft soon (the 2007 comparison, underlying fundamentals, etc.) So, that colors my thinking, to be sure.   I view SPX’s move from the 7th as [i] of 3 of (1) down, meaning this bump up today is a corrective wave [ii] that’ll be blown out of the water with the [iii] of 3 move down.

I added modest longs last week (Thursday or Friday?) in anticipation of the bump up, but closed most of them around 1316 this morning.  I might add a bit more if we backtest at 1310 or so, but the downside is likely not worth it, as we’re talking the c wave of [ii].   I’m currently as close to cash as I’ve been in a while, and am more focused on determining the best way to play the next leg down.

Irrespective, I believe DX’s channel would prevent it from making new lows until early August.  I think that in times of great uncertainty, markets keep their options open as long as possible.  For DX, that means staying in both the falling wedge and the rising channel until it must choose — by Aug 11 at the latest.  In fact, might just zig-zag all the way to 75.2 on the 11th, unless other markets go haywire first.

If stocks do crash, of course, that’s fuel to the upside fire.  But, what if they don’t?  You’ve got a very good case for 771-73, as the falling wedge has a long, long ways to go if it’s allowed to.  And, the fundamental problems are numerous.

Please share your thoughts anytime.  Yours are among the most reasoned opinions I read on Daneric’s blog.