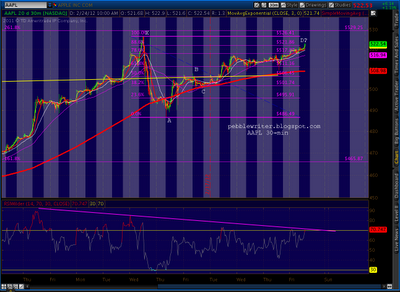 Meanwhile, FactSet reports that, absent AAPL and AIG, last quarter’s S&P 500 earnings growth would have been 1.1% rather than the 5.9% reported thus far.   Wow.

Meanwhile, the dollar continues to slump, dropping through key support — reportedly in response to expected additional QE (despite protestations to the contrary by various Fed gov’s.)  It’s dropped below its Feb 9 low, but is looking very oversold in the short run. 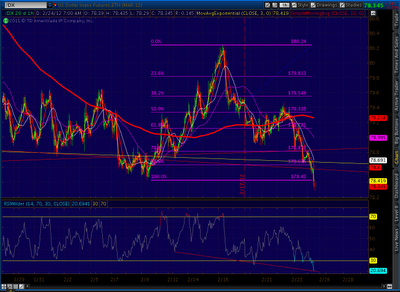 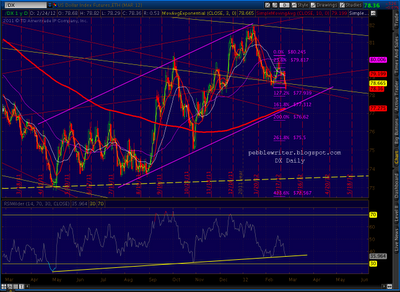 I’m hearing this grating refrain a lot lately.  Besides friends, family, clients…I’m asking it of myself, staring into the mirror after a market like yesterday’s when time seems to stand still.

One of the indicators I’ve been watching is AAPL.  A thousand shares in 1997 would have bought you a used Aerostar van.  A thousand shares today would buy you a brand new 56′ Beneteau.  AAPL is a leader amongst increasingly narrow leadership — a bell cow among lemmings.  As AAPL rumbles to new highs, bulls party like it’s 1999.  But, when AAPL stumbles, it takes the bulls down a notch — sows a few seeds of doubt.

This morning, AAPL is flirting with the .886 of what might be a Bat pattern.  We talked a few days ago [see: Just Do It] about AAPL’s run-in with the trend line from 1994, negative divergence, the Crab within a Crab pattern, etc.  Since the Feb 15 high, however, our attention has been on whether it was capable of making a new high.

For one thing, the smaller of the two Crabs has a 529.25 target that we didn’t quite reach (we came up 3 pts short.)  But, the reversal to 486 off the 526 high was impressive enough that we didn’t care all that much at the time.  Now, as SPX is inching back towards 1370, I find myself caring. 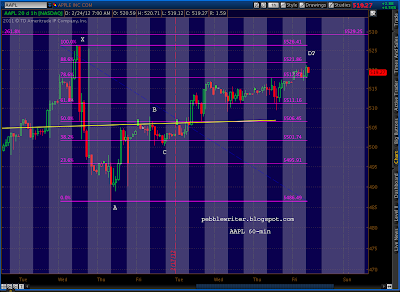 One way to play a suspected Bat is to short just prior to the Point D, with a stop just beyond — in case it turns into a Crab.  The other imperative is to watch other technical indicators for evidence of a turn.  In the case of AAPL, we have a pretty impressive TL on the 60-min RSI that suggests 521.86 will be the end of the retrace.  But, I’d put a stop just above 527 just in case.

We got up to 521.10 this morning — close enough, in my book for the pattern to be considered complete.  But, I’d want to see a sell off before considering it done.  SPX has exactly matched its intra-day high from Feb 21 of 1367.76, and seems to be thinking about a run higher.  Whichever path it takes, it’ll be easier if AAPL leads the way. 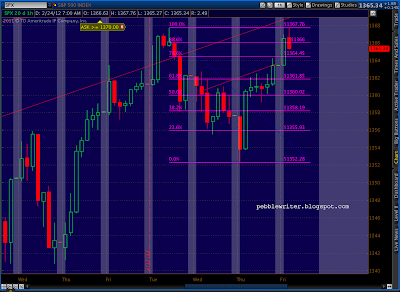