In a couple of 5/3 posts [Short the Banks and Follow Up on Financials] I suggested XLF — then at 16.40 — was due for a drop to the mid-15s.  It hit 15.67 on the 17th and has been in a what I think is a rally in a ongoing bear market for financials.  Those who didn’t take profits a few days ago may be wondering whether the worst is over. 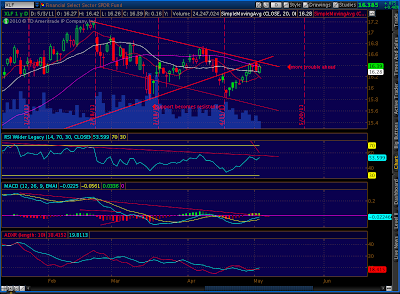 Short answer is NO.  The banks are dead meat; they just don’t know it yet.  Rising interest rates, investors and cash-strapped governments looking to win the legal lottery, ugly balance sheets (their most craptastic assets not even listed), worsening credit quality — take your pick.  That’s an oncoming train, not a light at the end of the tunnel.

IF they can arrest today’s decline, they MIGHT rally up to 16.05-16.10 before the bears take control again, driving XLF down to 15.50 in short order.  But, that’s just the start.  From there, we finally lose the channel altogether and head for single digits.

Financials led off the last market crash; I believe their collapse in the next week or two will be the final straw for this market, too.  I wonder if it’s too soon for Vikram to renegotiate his contract?