Back on June 27th, with SPX at1279, I suggested an upside target of 1322 [Patterns, Patterns and More Patterns.]  At that price, I noted, we would have completed a bearish Crab Pattern at the 3.14 extension of the BC leg.

At the recent high of 1341, we’ve completed a nearly perfectly formed Crab Pattern at a whopping 4.237 extension of the BC leg (an unusual Fib number — inverse of the .236 level.) 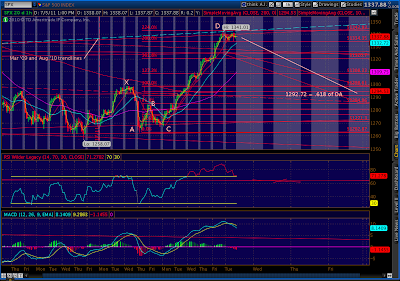 These targets dovetails perfectly with my “same as 2007” way of thinking in the near-term, and the resolution of the head and shoulder pattern developing longer-term.  Note the H&S pattern target indicates 1146, close to the 2.618 AD retracement. 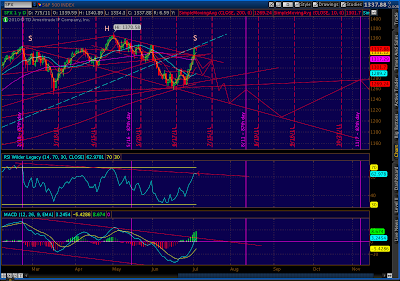 Looking at the hourly chart above, I think we’re about to start that next leg down.  Let’s call it a 3 of (1) of P[2].  We’ve got plenty of possible catalysts: Greece, the Portugal downgrade, coming employment data, the debt limit, etc.

I expect this move down to be fast and powerful.  I added to short positions in SPX and XLF near today’s high and long positions in VIX.  It’s still possible we go up and kiss 1345 for a proper double top, but I don’t think it’s necessary in order for the DT or H&S pattern to be valid.