If the reported settlement of $20 billion is all it takes to get the banks out of their foreclosure fraud liability, we should see a pop in the financials.

I’ve been watching a bullish Bat pattern evolve in XLF.  While I’m very bearish on the financials (and the market in general), a settlement could provide a short-term boost that leads the XLF and the overall market higher over the next few days. 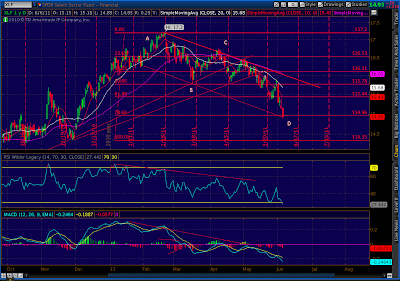 The pattern targets an upside of 16.55, but a return to the upper end of the channel is likely all we’ll see.

That would drop XLF out of the channel, which is entirely possible.  Experienced harmonics traders look for a confirmed move in the anticipated direction before placing trades, and place stops to limit the fallout from the 30% failure rate.