NOTE:  The Dec 6 post is combined with this one from yesterday.  All targets remain unchanged from last week.

Much has been written about the yield curve’s ability to forecast recessions — which sometimes helps one forecast markets. Many pundits seem to regard an inversion of the 2s10s as a sign of an impending correction — pointing to the current spread of 15bps with some alarm.

But, as we’ve discussed many times, it’s the rapid spike in the 2s10s following an inversion that is highly correlated with the biggest equity collapses of the past 20 years.

It’s a good model, but not a perfect one.

SPX’s subsequent 58% collapse was nicely correlated with 2s10s.  But, again, the fit was far from perfect and there were numerous head fakes.

An examination of the 2Y and 10Y side by side in 2000-2002 shows that the sharp spike in 2s10s was primarily due to the relatively faster drop off in 2Y yields. 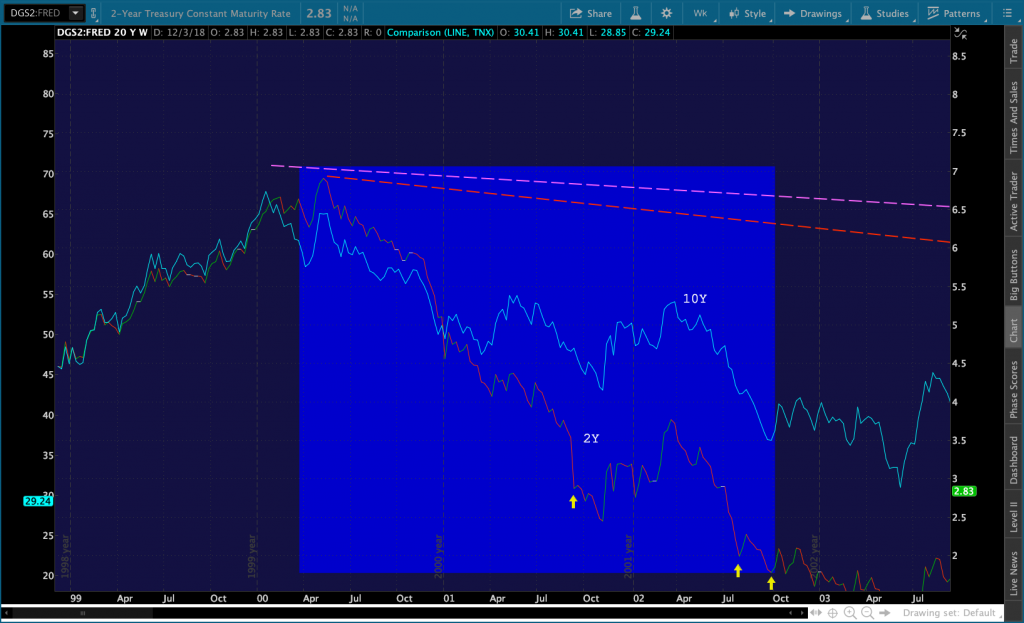 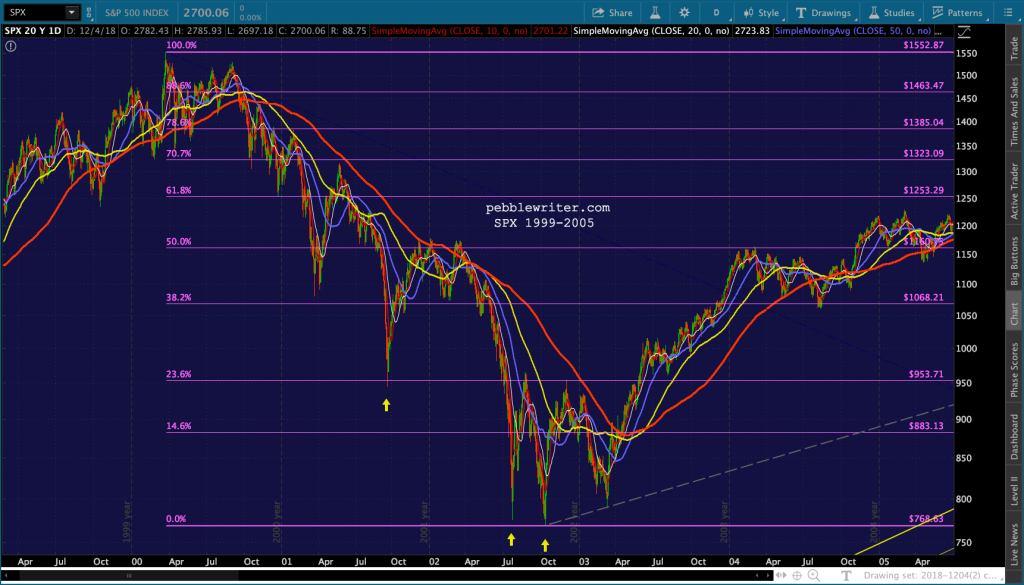 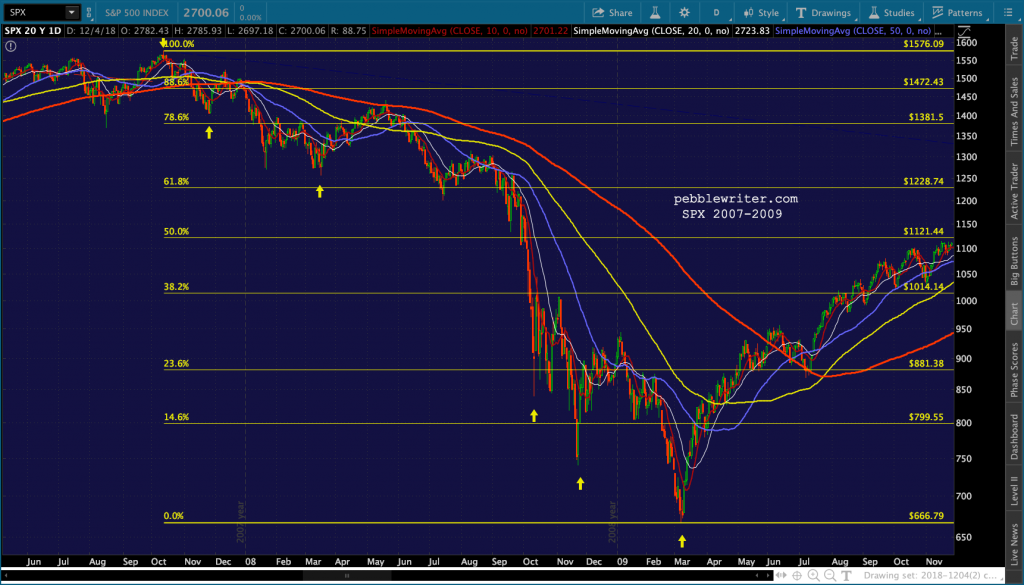 Several additional posts over the past year have further developed the model, revealing several very interesting nuances that address both issues.  It has helped me pinpoint numerous interim turning points, including the recent 184-pt drop [see: Nov 9 Update.]

The basic rules can be observed on the chart below.  The colors refer to the arrows. 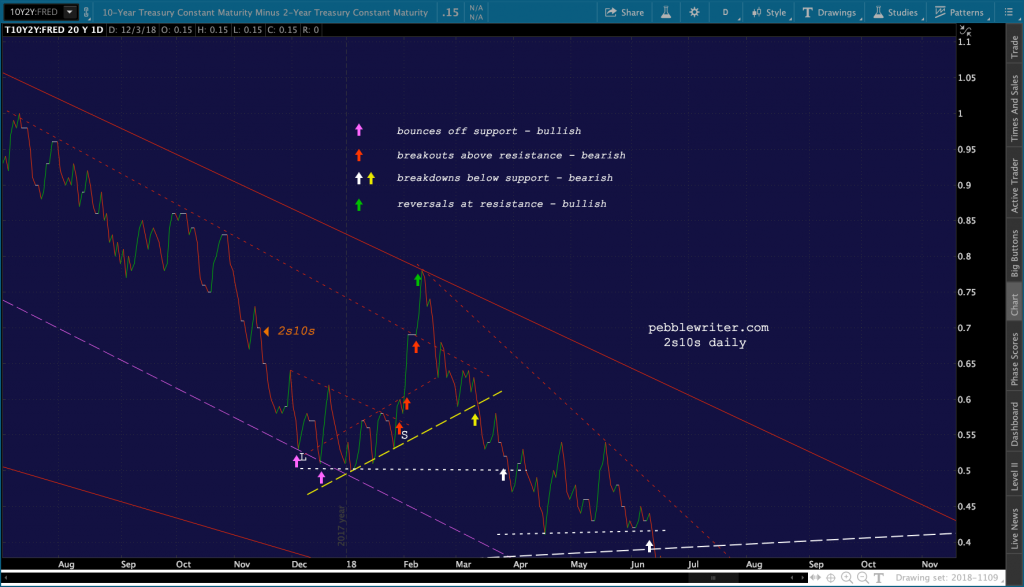 Following these rules would have yielded the following long/short decisions between December 2017 and April 2018.

Let’s overlay SPX and see how the model did.  The shaded areas are the periods during which the model signaled a long position.  The unshaded areas indicated shorts. 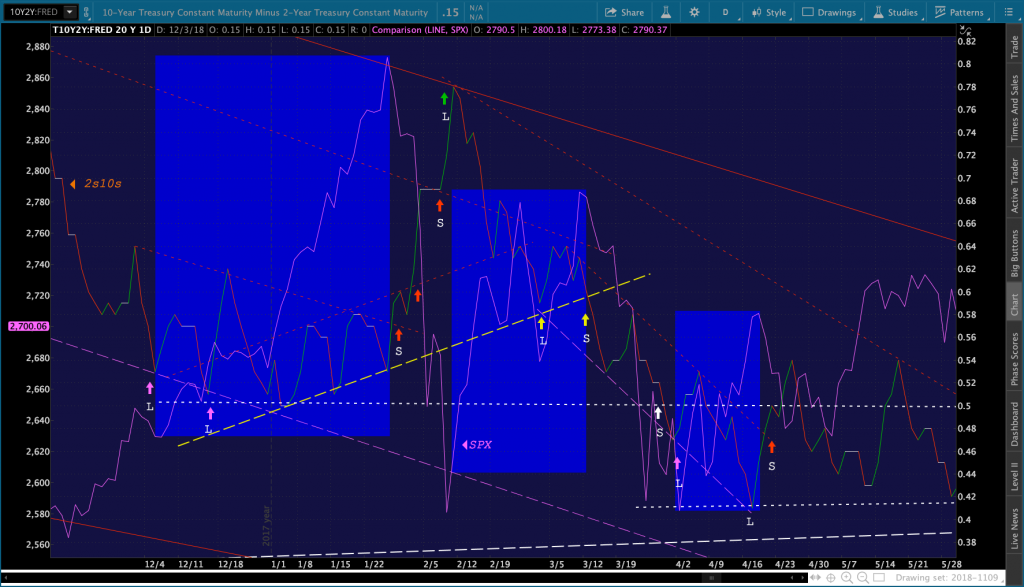 There was one period when 2s10s bounced back above the white TL when signals were definitely mixed. But, since SPX was bouncing along atop its 200-DMA, it wasn’t tough to decipher the correct signal.

This was also clearly a period of extraordinarily large moves higher and lower.  So, the value of the signals was much greater than might otherwise have been the case.  Let’s take a look at the more recent case — between July 13 and the present.

A buy and hold strategy would have yielded a 101-pt or 3.6% loss.  The model, applying only the broad strokes, would have generated 740 points, or 26.4%.  And, since 2s10s just fell through horizontal support on Tuesday, there’s likely more downside ahead.

The yield curve model is only one component of our overall analysis.  And, the above both oversimplifies its application and understates its value.  Combined with the other tools I use every day, it’s contributing to a banner year.

Already a member? Login below…