Just came across this fascinating quote over at Zerohedge.  It speaks volumes.  The most chilling part is the last five words of the attribution.

“Whoever controls the volume of money in our country is absolute master of all industry and commerce…and when you realize that the entire system is very easily controlled, one way or another, by few powerful men at the top, you will not have to be told how periods of inflation and depression originate.” – President James Garfield, two weeks before his assassination.

Still traveling, so this will be brief.

Yesterday’s action has shaken the faith of lots of bears, exactly what you would expect under the circumstances.  Despite the fact that SPX set a new high and is closing in on 1370, the push has been on narrow leadership and weak volume.

My premise is that the situation in Europe is not going well and, since we’re talking countries rather than companies, this will end worse than Bear Stearns/Lehman/AIG.  I don’t see anything on the horizon that will “fix” the problem, although resolution could be delayed if the EZ possessed the political will/unity to do so. For that contingency, I maintain stops at a reasonable level.

I believe EURUSD has completed a nice back test of a big-ass H&S pattern that just so happens to target 1.12 — the bottom of the flag pattern that’s been tracing out for the past 4 years.   I think the next move down will be very significant, probably skipping a channel or two on its way down. 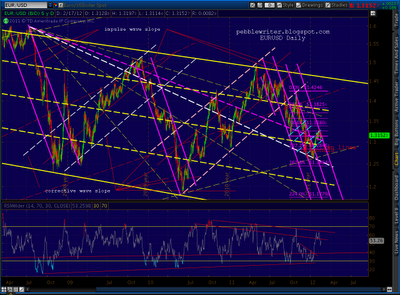 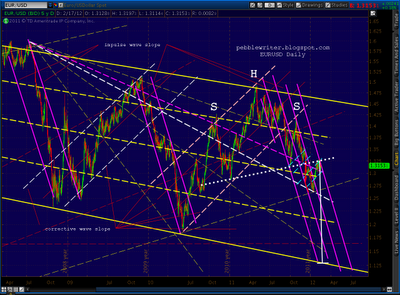 There’s a little H&S pattern that’s set up over the past three weeks that’ll start the ball rolling with a break below 1.30. 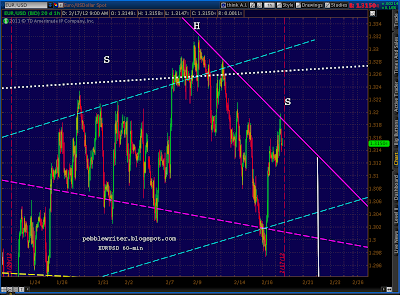 The dollar fell yesterday, but it felt more corrective than impulsive.  We’ve made a series of higher highs and higher lows since our Feb 7 call for a turn — despite the fact that SPX hasn’t cooperated in the least.   I haven’t touched the chart from back then, because the fan lines continue to do their thing. Could anything go wrong?  Sure.  Note that the yellow dashed fan line that provided the last turn could also serve as a nifty neckline for a H&S topping pattern.  If prices touch that line, I’ll give up my bullish position and let the dust settle.  But, for now, I’m still looking at a target around 87+ — the top of the flag pattern.  It will correspond with a powerful equities dump. 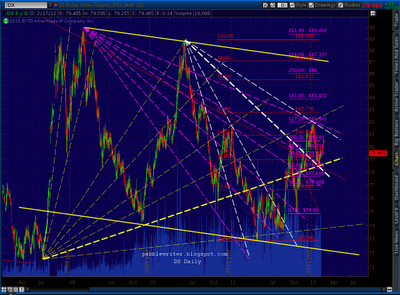 I was stopped out of my VIX calls yesterday, but have jumped back in at a lower price.  Looking at the chart, we’ve made a lower right shoulder on the IH&S pattern.  Until it moves lower than the head, it’s still intact.  Today’s low makes for a very convincing back test — without even re-entering the falling wedge.

XLF hasn’t participated in SPX’s new high, completing a goofy Gartley with a back test at the .786 of its recent slide.  I added to my bearish position there.  Likewise with Starbucks, which completed its own rising wedge back test with a Gartley pattern at a .786 retrace. 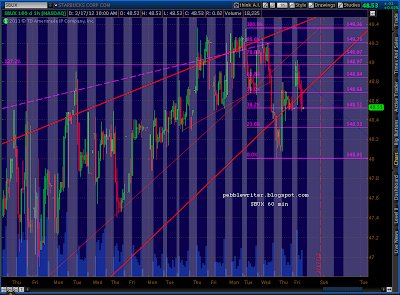 Gold continues to move sideways after leaving the upward sloping channel the other day.  I think it’s tracing out a flag that should see it back below 1700 in the next few days. 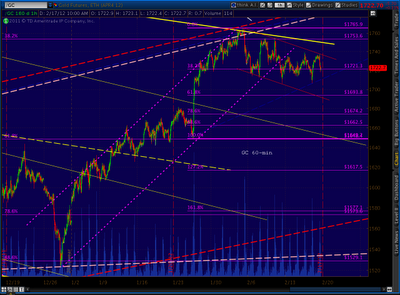 And, last, because I have to dash…  SPX just completed another Crab pattern at its high for the day. 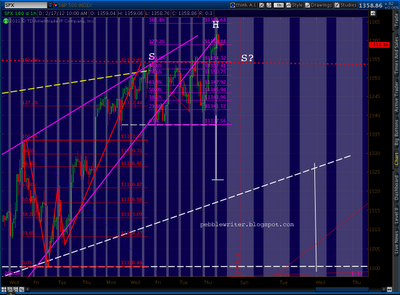 SPX is still backtesting its rising wedge — just at a higher price (which none of my other positions did, BTW; nor did AAPL.)

But the thing that kept me from blowing out of the position yesterday was the fact that its RSI never regained its trend line.  For now, it’s simply a back test of a rather meaningful trend line. 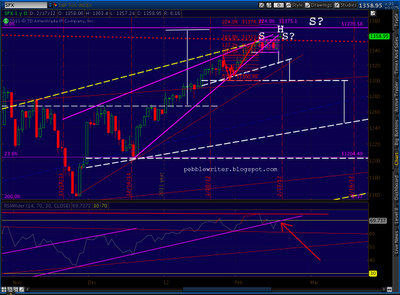 I won’t be able to post again until tomorrow, as I’ll be attending a friend’s funeral and wake this afternoon.  I wish you all good luck.