The market seems to be in full OPEX mode, with every attempt at a breakout — up or down — quickly aborted.  At this moment, it’s pushing toward the downside, which is a good reason to revisit the harmonic picture. There is also horizontal support around 1200, not to mention obvious round number support.  While yesterday’s 1209 low might be close enough to consider these patterns completed, I would normally look for a more precise tag before playing the rebound.   Given that this is OPEX Friday, and MM’s are under water after yesterday’s plunge, I won’t be surprised if we see a ramp job kick in if we get any closer to 1200.

Ages ago, on November 9, I expressed my frustration at being unable to more definitively discern the market’s next move.  From that post:

I went on to cover my ass explain:

The key is where Point C lands.  It could go as low as A, but shouldn’t be any lower (with rare exception.)  In fact, 1215 is my defacto line in the sand to determine whether we have one last leg up or not.

Well, do you ever get the feeling that the universe is messing with you?  We got the “downturn I’m expecting Wednesday,” a 30-pt plunge that put bubbles in this bear’s champagne.  We reversed there, establishing a potential Point C smack dab in the middle of the range I envisioned.
It was earlier than I expected, but otherwise okay.  Now we could head back up toward what I presumed would be 1307 on December 5.  Then, along came Unicredit’s $10 billion loss, Fitch’s stating of the obvious, and increased media scrutiny of the Euromess and the Supercommittee superflop.
Where does that leave us? 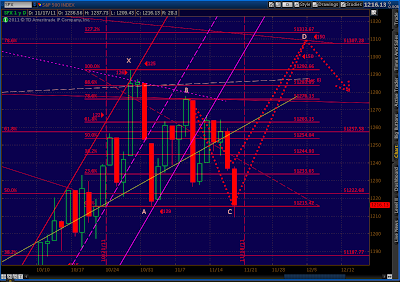 Do you ever get the feeling the Universe is messing with you?  Do you ever wonder if there’s a secret government installation, buried deep under the tundra somewhere, full of ex-Goldman guys whose sole purpose it is to read all the blogs out there and rig the market to inflict the maximum amount of frustration and self-doubt?  Do you ever sit alone in the dark at 4:30 am, asking rhetorical questions?
(if you answered yes to two or more, you too might have a future in blogging.)
There are all kinds of reasons this turd of a market should turn down right here, right now — without apologies, without looking back.  The arguments are clearly laid out in all the financial newspapers and websites.  Heck, you’ve been hearing them from me for months.

But, then there’s the fact that we couldn’t push convincingly through 1215 yesterday.  I know, we hit 1209 intraday, but we closed at 1216.  Coincidence?  Maybe, but it’s also possible that the triangle I’ve been harping about was one of the 46% that break downward, establishing a decent Point B in a larger A-B-C leg that’s heading for 1307-1313 on December 5.

For now, I’m going to consider that “line in the sand” as bothered, but not broken.  At the very least, we’re due for a bounce off of 1215.  Whether it’s an OPEX-infused backtest or a larger leg up is still up in the air, in my opinion. 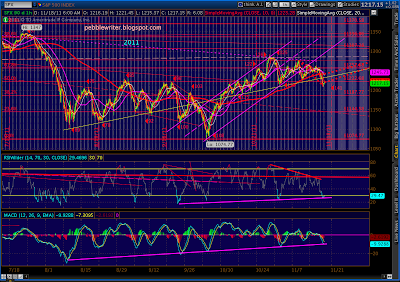 We have positive divergence on the short-term charts; VIX is forming a falling wedge; and, surprisingly (not), a new rumor about some marvelous financial engineering that will save the Euro, once and for all (it won’t.)

And, finally, my gratuitous attempt to blind you with science…  The 2008 v 2011 analog I’ve been reporting on since last May says wave 2 isn’t over until day 150 — about 10 sessions from now. 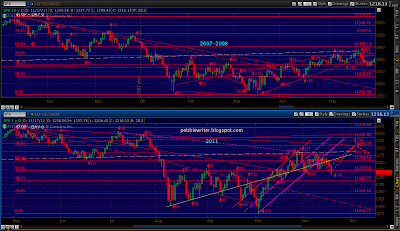 All I’m saying, folks, is this is belt and suspender territory.  I’m short as can be, but I bought a nice little insurance policy yesterday that leaves me effectively straddling the market in the short run.  I may leave some profits on the table, but just in case Friday isn’t the big downdraft so many others are predicting, I’ll sleep better going into the weekend.