NDX is still stuck at the apex of its rising wedge.  Looks very vulnerable here, with an RSI TL tag and MACD rolling over to boot. 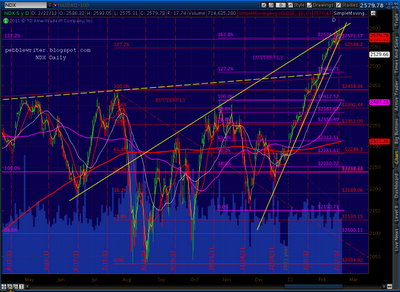 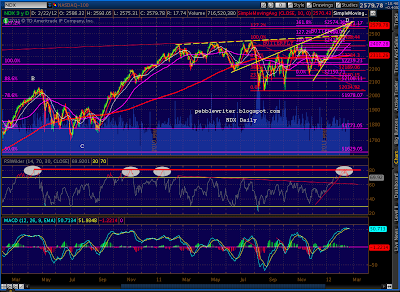 A lot has been written about AAPL, and its ability to bounce back above its recent highs.  Remember, we saw its reversal coming a mile (well, 36 points) away [see Feb 11: More Crabapples.]

The stock had poked up above a trend line that extended back to 1994 (log scale), was neck deep in a rising wedge and was flashing very strong negative divergence.

Best of all, it was completing a Crab within a Crab pattern – one of my favorite short setups.  Here’s the chart from Feb 11 showing the trend line that, if broken, would result in a Crab completion at 529. 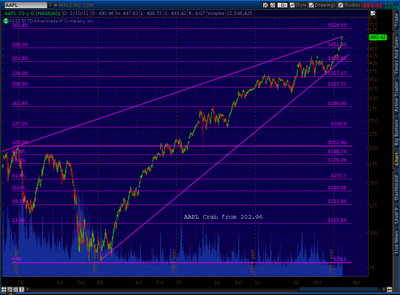 The rest, as they say, is history.  AAPL got within 3 points of our target, then fell 40 points to 486 — leaving a very bearish looking topping candle in its wake. 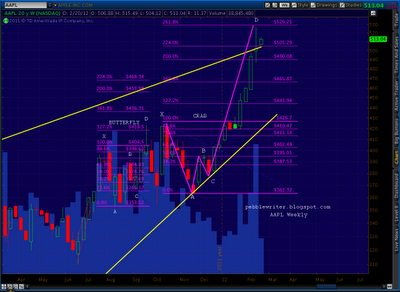 Since then, it’s retraced about 78.6 of its losses; and, most financial writers are calling for new highs.  While anything’s possible for this amazing company, there’s still a good case for further declines.

For one, rising wedges like touches on both boundaries — and the lower bound is down there around 415 feeling very neglected.  Second, Crab patterns are wont to retrace .618 of their XA moves, which in this case would be to around 426.  And, last, AAPL is running into trouble with respect to its RSI chart. 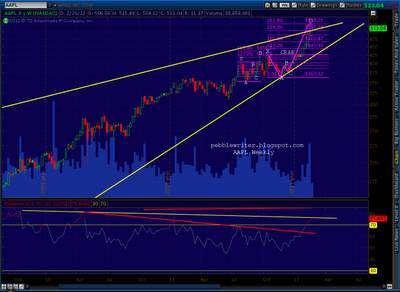 The yellow TL, in particular, exhibits some pretty massive negative divergence.   Back in October 09, when that TL originated, AAPL was hovering around $200/share.

On the hourly chart, AAPL appears to be back testing the yellow, dashed RSI trend line.  Unless the bottom falls out, it will likely complete a little Bat pattern — tagging the .886 Fib at 521.77 at about the same time it runs into overhead resistance from that red, dashed TL.

From there, we could see a continued decline to the lower bound of the rising wedge for a 15-20% decline from recent highs — a plunge that would likely accompany (if not precipitate) a general market decline.

8:15 PM: This just in…check out the interesting post over at Zerohedge re the largest hedge fund holdings.  AAPL comes in as the most crowded trade in the bunch. 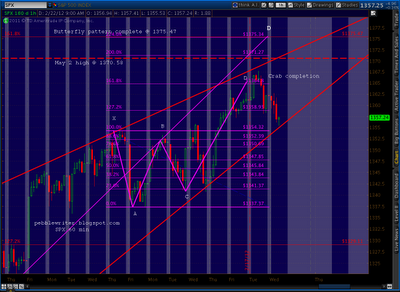 The 60-min RSI has tagged a trend line that could resist any further downside.  Decision time. 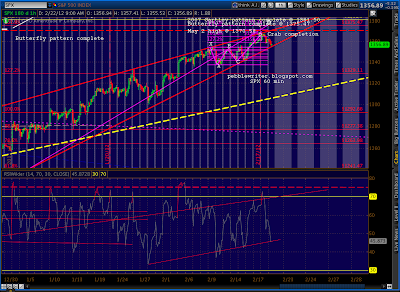 The daily chart RSI shows the back test of the previously broken trend line (in yellow) and the establishment of a new line (red) we need to break in order to confirm a downward break of the corresponding rising wedge. 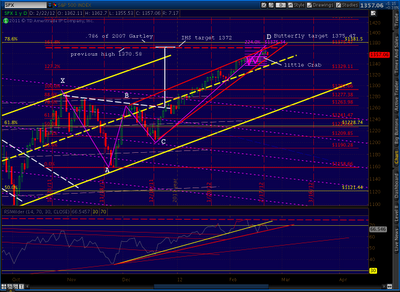 Note:  got stopped out on my remaining gold short position (for roughly a break-even) since prices have moved beyond the back test of the recently broken channel.   I’m looking at 1800 as a likely re-entry point.

1802.70 is the 1.618 of the developing Crab pattern and should result in another touch of the fan line that brought the last reversal.  I’ll be especially interested if we see negative divergence continue to develop on the 60-min chart. 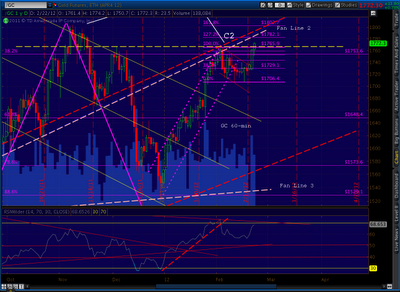 SBUX is rallying after a nice 5-day sell off from its rising wedge break.  Judging from the 60-min RSI, it should reverse here and resume its decline.  My target is 47.40, or a tag of the lower RSI TL, whichever comes first. 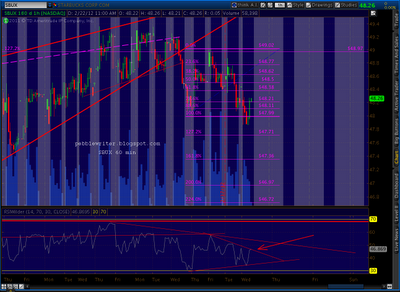 I still have half my original position left, and will let it ride unless we break the downward sloping TL on the RSI — probably around 48.35. 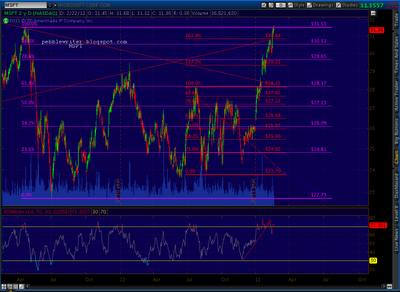 Among other high-flyers, GOOG is tracing out a H&S pattern in the wee small hours of its rising wedge.  A break below 565 could see it revisit its June 2011 lows of 480. 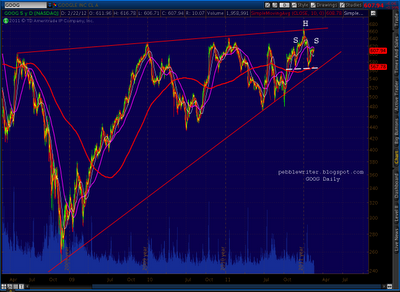 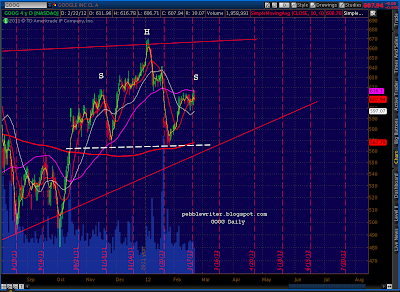 Don’t you just love waiting?  After a prolonged melt up like we’ve had the past two months (feels like six), we’re all more than ready for a turn.  Even the bulls are getting antsy.

As we discussed yesterday, there are multiple risks to the bull case immediately overhead.  In the meantime, we completed a little Crab pattern on Monday that should see SPX back down to 1348 or so (.618 of the XA distance.)   But, watch out for at least a pause at 1355.87 — the wedge lower boundary and horizontal support off the Feb 15 high.  Depending on selling volume, the decline could reverse there and go on to tackle some of the overhead targets.

A decline to 1348 would be significant in itself, but of more significance is that it’ll take SPX below the rising wedge that’s formed over the past three months.  This wedge has been broken before, and has handled it by widening the original path.  Since it’s been about as trustworthy as a central banker, we’ll watch this one very carefully. 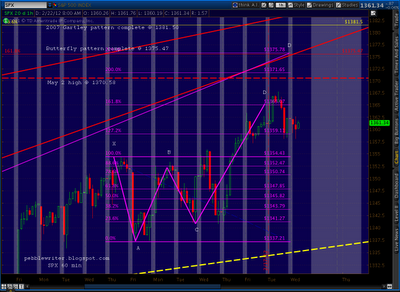