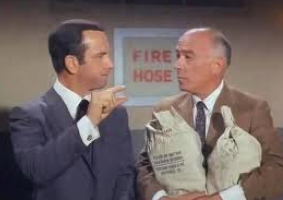 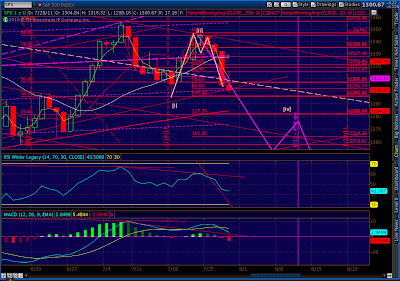 If TSHTF, look for a test of the Jun 16 1258.07 low.  At this rate, and with a downgrading of US debt almost certain, we could easily tag it tomorrow.

And, the ES vs. USD/CHF comparison we’re tracking… 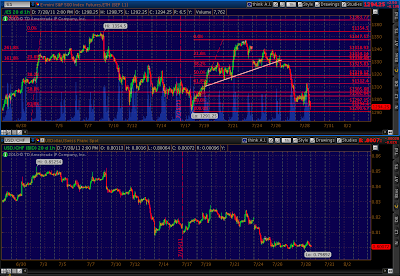 As we discussed this morning, the bounce has mostly vanished.  We’re clinging to a small gain, +1.51 at this time.  Note that RSI sits right at 32 on the 60 minute chart.  The last time we were here on the way down was just before yesterday’s huge sell off.  I expect the next iteration of that soon — possibly into the close today. 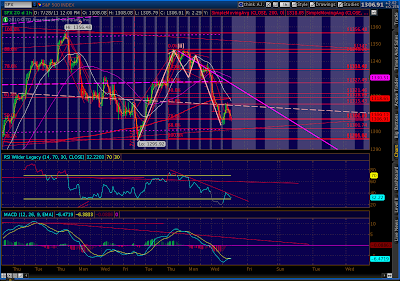 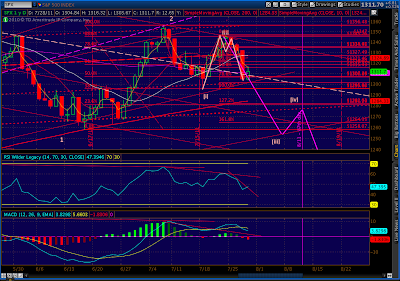 Declining beneath the 200-day moving average will amplify the bearish momentum.  The next downside targets would be the -2 std dev line (currently at 1273.50 and horizontal support around 1258, where we will complete [iii] of Minor 3 down.

Just a quick note on the debt situation.  Zerohedge reports that Chinese credit agency Dagong will downgrade US sovereign credit rating as early as Monday, regardless of whether there’s a debt ceiling compromise.   I’ve printed an excerpt below.  See Zerohedge for more details.

“We will definitely cut the rating, regardless whether there will be a compromise. It has already dealt a blow to investors’ confidence,” Guan said. He said it could slash the rating to D if Washington defaults.


Guan’s warning was starker than in an interview with Reuters on July 14, when he threatened to cut U.S. ratings in the coming three to six months if there was no major event to make real improvement in the U.S. fiscal situation.


Economists estimate that China has parked about 70 percent of its $3.2 trillion foreign exchange reserves in U.S. assets. 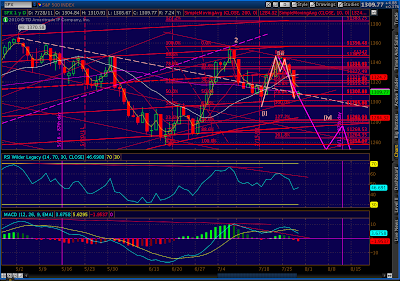 In last night’s post, I stated 1298.58 would complete the .886 retrace for a valid Bat pattern.  Just caught a programming error…the correct figure is 1301.74.  Meaning, we got 96% of the way there — generally good enough for the pattern to trigger.  Remember, though, that these patterns fail about 30% of the time.  So, no guarantees…

The net effect won’t be known for a week or two, but there have been reports of sizable layoffs in the financial sector.  This is likely to put a damper on any improvements in New York,  as much of that economy revolves directly and directly around Wall Street’s fortunes.

In a turnabout from previous weeks, when the slightest good news was cause for a 100-point DJIA rally, the market is thus far only mildly impressed with these figures.   Could be that the lag effect of 12 days is enough to render an improvement meaningless.  The current debt ceiling debacle is likely to put a serious damper on next week’s figures. 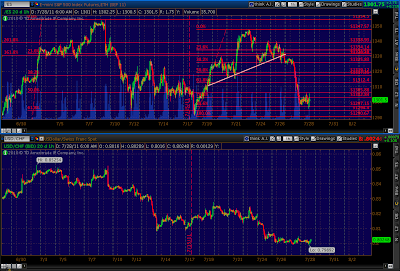 If the market declines to 1298.58, we’ll complete a bullish bat pattern with rebound potential to 1330.  But, there’s plenty of momentum on the downside, here.   While a bounce wouldn’t be surprising, it shouldn’t reach more than 1320 (just beyond the .382 Fib line.) 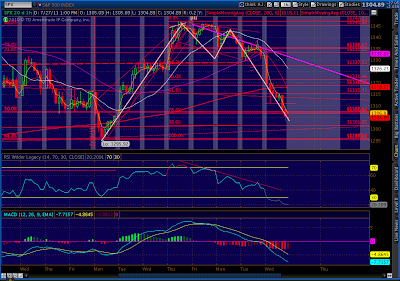 SPX closed below its 10, 20 and 50 SMAs; the SMA 200 is at 1283.62.  Breadth today was overwhelmingly negative, as are just about every other technical indicator.  There is little to indicate any return to the upside except for the slight bounce we might see within the next 10 points.

Initial claims are due at 8:30 EDT.  Consensus is 415K, but I’m expecting that figure will be exceeded.  As sensitive as the market currently is, we should see a reaction. Pending home sales are due out at 10:00AM.  The market’s looking for -3.5%, but recent real estate data has been full of negative surprises.  Tomorrow should be no different.

More in the morning.