Just a quick recap of where we are:

Fairly neutral at the moment, other than some longer term bearish bets I established last week.  Took profits yesterday on most of my shorts, and actually bought a few SPY calls this morning, nothing big. We have to get OPEX out of the way first, as prices are caught in that tractor beam.  But, until the debt ceiling issue is resolved, I can’t see a lot of big moves either way.  Looks like we’ll close at 1315 or 1310.

The MM’s make money on volatility, so we keep seeing these little breakouts that go nowhere (just a minute ago, TICK was -982, no follow-through) just to bring suckers into the game.  In the meantime, we just range down into this falling wedge, currently bounded by 1305-1313.  The apex is Monday, but that doesn’t matter as we’ll just redraw it until there’s resolution.

I can’t imagine that we wouldn’t get a good-sized pop when the news breaks, but after the celebration dies down we’re still in a sucky economy with even bigger debt problems, euro problems, political stalemate, etc.  The USD should rally up and keep going, only because it’s (at least temporarily) in better shape than the EUR.  But, I’m expecting the equity rally to die off pretty quickly, probably no higher than 1345.  I think by mid-August at the latest, we’re looking at 1200-1230. 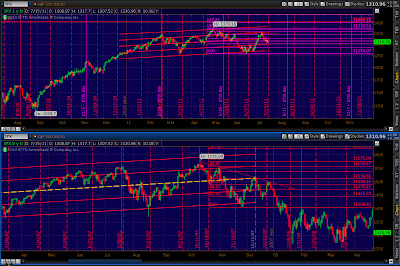 Just want to reiterate, go back and look at 2007.   We don’t have to trade every expected move.  Those that missed the 110 pt runup from 11/27/07, got a 70 pt runup 2 weeks later.  Those that missed the 12/11 top got another shot two weeks later.  Even bulls who clung to their longs got bailed out when the market backtested the channel bottom for FIVE MONTHS before finally rolling over for good.

Many expect a flash-crash kind of crack, and sure it could happen.  But, history is on the side of gradual declines, 1% day after day over weeks or months before capitulation by the big guys makes huge declines possible.  Remember that the bulk of investment capital is with institutions that have an equity allocation that varies very little from day to day, even year to year.  It takes a lot to get them out of stocks, especially when the alternatives are equally bleak.

Today’s dominant themes are the expected debt ceiling breakthrough, lukewarm economic news and options expiration.  It’ll be a battle to see which exerts the most pressure, although any debt ceiling news should trump.

Stocks have formed a narrowing/consolidation pattern typical of OPEX, taking the form here of a falling wedge, while DX has formed a rising wedge.  As discussed yesterday, both should break out on news of a resolution, but only the dollar should be able to sustain the bump.  I’m working on a more precise target for stocks, but I suspect it will be in the 1345 area.  It should test, but not break, the 1356 highs from the 7th. 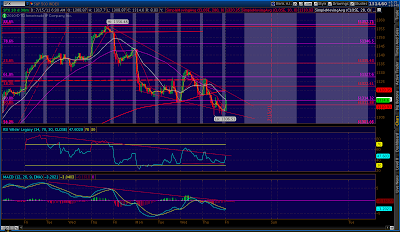 I used yesterday’s lows to take profits on riskier downside bets, and swap out trades to better position myself for the updraft that could occur any minute.   Today, I expect we’ll follow the pattern of the past two days, where we open higher but drift back towards the bottom of the falling wedge around 1300-1305.  The 1298 high from 6/2 appears safe for the time being.

There’s a pretty stiff penalty for being wrong on timing as volatility remains high.  There is also still a small, but real risk that Congress blows it, and we don’t get a deal on time.  The safe stance is to scale back on short-term bets and use price swings to establish or add to longer-term positions if opportunities present themselves.