XLF (currently 15.6) finally joining the action on the upside.  But low volume and a declining ADX…  I think it’s about to get smacked down by its 50 and 200 day moving averages.  Also within a few cents of completing a bearish Bat pattern.  Initial target is below 15 in the next two weeks.  It should remain in the falling channel it’s been in since February, so the upside should be limited to  15.7.  Possibly a little early, but can’t resist initiating a small put position here. August 15’s at .21 are calling…

In the meantime, watching for a good entry point on SPX.  I wouldn’t mind initiating a short position here, but would feel more comfortable waiting for some confirmation — a nice red candle on the 15 or 30 minute chart, for instance….

SPX just had the little spurt we were talking about yesterday, hitting 1329.51.   I think that should do it for the upside.

/DX has been in a falling wedge for a year, now. 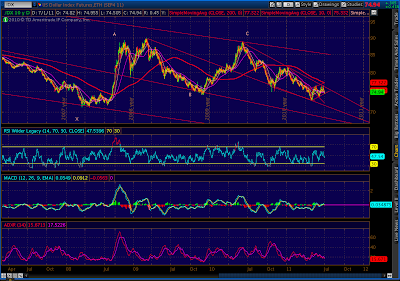 As the longer running pattern, I’d give the nod to the wedge.  But, my gut tells me the channel will provide strong support until either a breakout to the upside or the wedge forces things back down.  Bottom line, the dollar looks to rise for at least the next few weeks. But, we’ll keep an eye on it. 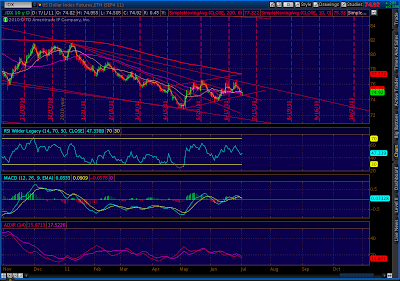