Just a quick check on how the fan lines from the Oct 07 top and Mar 09 bottom have done so far.  First, the big picture… 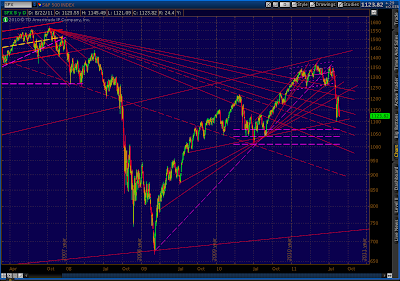 And, a close up of how well they’ve done lately in guiding price moves… 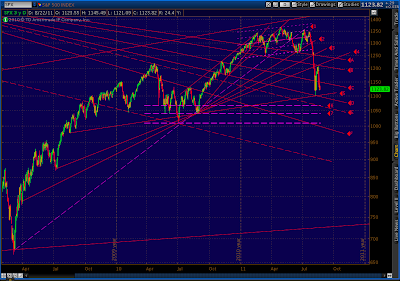 Their performance has been nothing short of stunning.  The Mar 09 fan lines (numbered) did an amazing job of guiding the Jul 10 through July 11 action.   Breaking Line #1, for instance, was the beginning of the end for the bull market.  Line #2 stopped the July 11 dive and, when we finally broke it, gave us a 200-point plunge.  Line #4 provided important support and resistance over the past 1 1/2 weeks.  Line #5 gave us an important bottom last week.  And, so forth.

The Oct 07 lines (lettered) have, thus far, defined every major move since the Feb 11 top — often supplying key support at a critical time.  Consider Lines A and B, both of which stopped serious declines.  Line D stepped in to stop the Aug 10 decline.  And, just this morning, Line C stopped the rally attempt cold.

The points that interest me the most are where fan lines intersect.  They often take on outrageous importance.  The bottom we made on Aug 10, for instance, was the intersection of Line D and Line #5.  Other important intersections were the Mar 16 and Jun 16 bottoms and the recent Aug 17 high.

As always, the important question is “what’s next?”  I’ve mentioned more than a few times that I think we should get to at least 1067 in the next few days.  This is the intersection of the midline of last summer’s W pattern ((Line #6) and a fan line crossing through the top of it (Line E.)

Another logical target is line #7, which is actually a fan line between the Feb 9. 2009 low and several key lows in last summer’s pattern.  It’s at around 1040.

Next up is 1010, which is obvious horizontal support from the low on Jul 1, 2010.  Beyond that, well…  let’s just say there lots of possibilities.  But, don’t be surprised if most of these lines continue to play major roles over the next couple of months.