Yesterday’s OBL rally was impressively thwarted, leaving us with a bearish candle and a possible top — albeit several points short of the overhead resistance mentioned in the last post.  As expected, we broke down from the smaller of our two rising wedges.  The larger wedge remains.

One more push higher would make for a cleaner EW pattern (5 distinguishable waves of 5) and would provide a little extra technical overbought conditions to be put in place before the leg down.  Such a push could begin here, or from trendline support found at 1335 (see note below), 1320 (off the trendline formed from the 3/16 and 4/18 lows) or the bottom of the larger rising wedge from Mar ’09 (currently at 1295, which is support from the 4/18 low.)

Any push should be contained in the 1382 – 1293 range as discussed in the last post and would set up the long-awaited next wave down.  I’ll be keeping an eye on the daily MACD and RSI, both currently rolling over and forming lower highs, but not yet firmly in the bearish camp.

NOTE:  another important trendline was left out of yesterday’s post.  The line drawn from the Oct 2007 1576 high to the 2/18 1344 high and the 4/6 1339 high could come back into play in the next few days.  It was very strong resistance on 2/18 and 4/6 and could now provide strong support — possibly the bounce before leg 5.  It currently stands at 1335.  I suspect if we descend through it without difficulty, we should have a swift decline to 1295 or below. 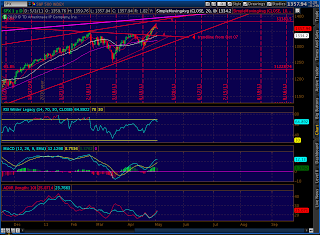