These charts indicate a collision looming between:

Note, both wedges are very long in the tooth, meaning they’re just about played out.  If only the smaller wedge plays out, the target would be the lower end of longer term wedge, or 1295 — a support line from the Feb declines, tested again on April 15.

Price target if the longer term wedge plays out is 46 – 100% of the rise, indicating 320-700 points on the SPX.  The last time we had a long-term wedge play out was in May ’10, when SPX declined 210 points.  According to Tom Bulkowski the average decline for all breakdowns is 14%.

Rising wedges can and do fail to break down as predicted, but given the presence of long term resistance (20+ years, no less), the Fibonacci and what looks like topping MACD and RSI, my money’s on a significant decline.  The shooting star setting up on the daily won’t hurt, either. 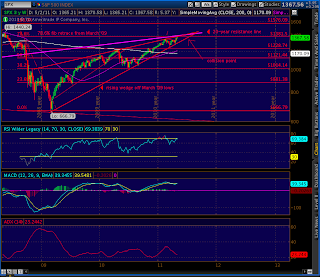 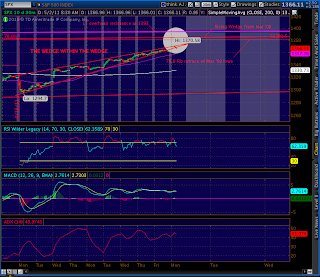