Today’s action was a mix of misdirection that would make Hitchcock proud.  We were down 10 points early, locked in a channel aimed squarely at 1300.  But, we quickly rebounded and the channel morphed into a descending broadening pattern.  Then, that pattern started tracing out a little inverse head and shoulders pattern that promised a trip up to 1411.  After all those gyrations, we closed up one point. 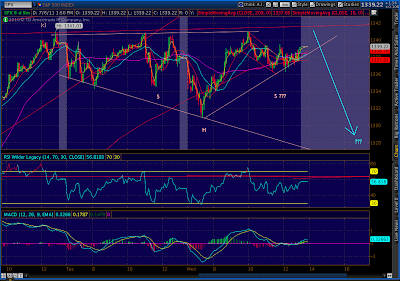 While the door isn’t closed on the IHS, the pattern we were left with looks a lot more like an inverted roof to me.   These patterns tend to go back the way they came (but not always), so I’m inclined to believe it reinforces our earlier Crab diagnosis.

Beyond that, there was something to frustrate everyone today.  Bulls are no doubt disappointed that, after that barn burner of a comeback, we still couldn’t muster a higher high.  I mean, seriously, folks.  Eight cents is all it would have taken.

And, bears are no doubt disappointed there was no follow-through on the nice early-morning plunge.  Ten points is a good start, but to give it all up on light volume is pretty lame.

My take is that, as today’s doji implies, the market is undecided.  Lots of economic cross currents and uncertainty — but, what else is new?  It doesn’t help that it’s a holiday-shortened week and volume is very light.

The only changes from yesterday’s post are that the put-call ration hooked up a little, indicating a short-term top, and the technical indicators on the hourly chart have more clearly topped and are heading back down — at least for the moment. 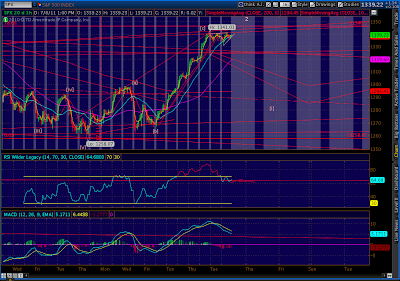 We also have a little IHS on VIX, indicating a bump to around 17.80.  VIX was as high as 17.08 on the day and left a slight hook up on the daily stochastic and MACD — a condition that arose but couldn’t last on the daily SPX chart.

Although I follow primarily the SPX, it’s worth noting that the COMP and RUT are similarly positioned re the massive H&S we’re watching develop.  The only difference is that they’ve already matched their left shoulders, and need only a nudge down to complete the pattern.  COMP’s target would be somewhere around 2315 and RUT about 685.

Also, for the record, there is a smaller potential inverse H&S setting up on each of the indices.   On SPX, it would require a dip to 1311 and back to 1340 to complete the right shoulder.  I’ll keep an eye on it, but fully expect that any trip to 1311 won’t be a bullish sign.

I continue to expect a sizable downturn within the next week — possibly to 1299 or below.  If we establish a higher high, I’ll reassess.   Initial unemployment claims are due out at 8:30 AM EDT.