The broken RSI trend line on the 60-min chart may or may not have completed its backtest.  If so, it was feeble, but may have been enough.  Regardless, the RSI hit a 6-month record high — significant in and of itself.  The hourly MACD also turned negative. 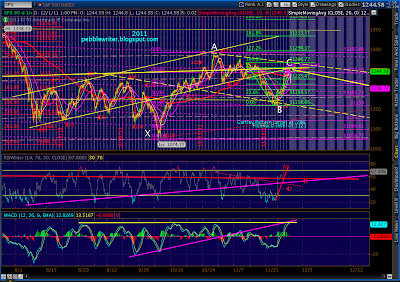 Another interesting development today, we completed a Bat pattern on the hourly chart and most of a Gartley on the 15-min chart.  The Bat is seen below in green.  The small purple pattern seen at the terminus (near the letter C) is a Gartley, better seen on the 2nd chart below. 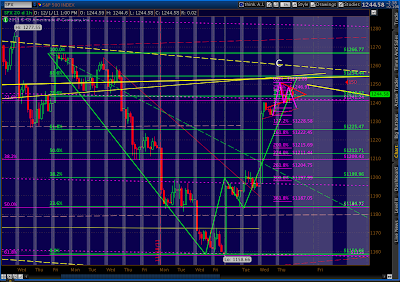 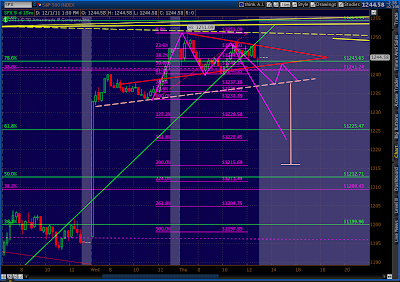 On the 15-min chart, we can also see the makings of a symmetrical triangle.  These can break either way, of course, but the last symmetrical triangle we had broke for 100+ points to the downside.  And completion of this little Gartley could help it on its way.

If we do hold at these levels and the reversal begins tomorrow, this is what a Gartley Pattern would portend.  Shown here on the 60-minute chart: 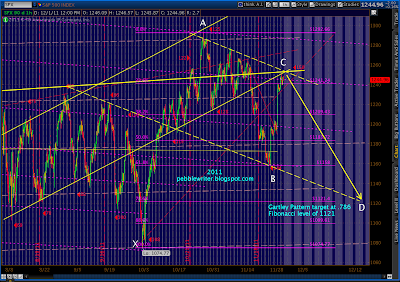 And, the daily chart: 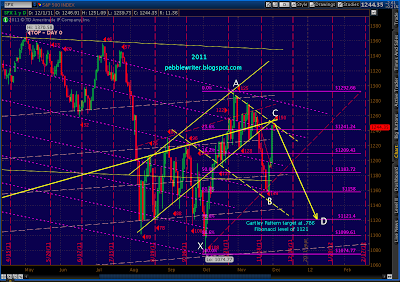 Just for grins, here are the corresponding values this go ’round:

If this is a 3rd wave down, any of those numbers is very reachable in the next few months.  Each of them is significant, too, corresponding with horizontal support or a major trend line.  But, I’ll address that topic if and when we head in that direction.

Just noticed the 60-min chart RSI has broken its trend line.  Not a good development for those waiting for more upside.  The MACD looks like it’s going negative by the end of the day, too.  With any luck, we’ll get a slightly higher high on the day, but a lower RSI on the backtest, setting up negative divergence on the 60-min chart. 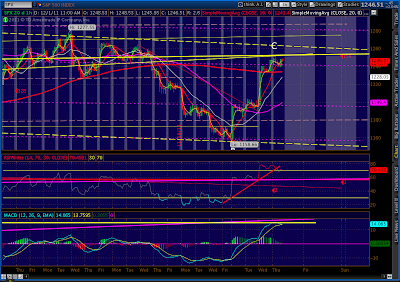 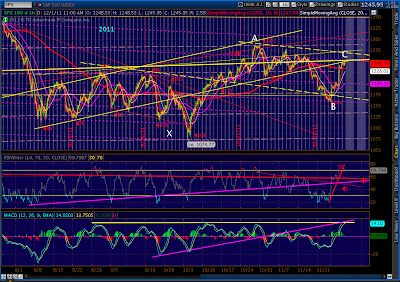 This feels very much like the quiet before the storm.  Yesterday’s ramp is showing absolutely no follow-through as of yet.   Even the mainstream media, after a day of deep thinking, has realized that the central bank love fest, while leaving everyone feeling all warm and tingly for a day, is likely to result in an embarrassing new rash.

Here’s a quick look at our daily chart: 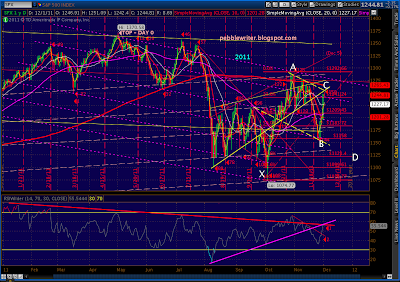 Note we’re reached the apex of the triangle we talked about so much over the past two weeks.  It’s formed by the trend line down from the Oct 27, 1292 high and another trend line up from the Aug 9 low of 1101.   I originally charted the apex as December 2 or December 5, but it looks to be about there now.

Could we go higher?  Absolutely.  Many Elliott Wavers insist we will.  But, I have very strong reservations.

Take a look at the descending red RSI trend line.  Note that it’s stopped six advances in their tracks.  The only time the RSI broke through was the 1292 high, which I have always viewed as an overshoot.  We’ve bumped right up against it a 7th time.  The odds favor another downturn.

The purple RSI trend line, which has acted as support since August 8, was broken on Nov 16.  Since then, it been in back test mode.  Yesterday’s advance brought RSI all the way back to the line, but it couldn’t climb back on top.  This adds to the bearish case.

Tomorrow, of course, is the 150th day since the 1370 May 2 high.  In 2008, the 150th day was the beginning of the final 10-month, 50% plunge.  While the price comparisons have become less relevant over the past few weeks, the timing of several reversals has been in sync.  Here’s a current look: 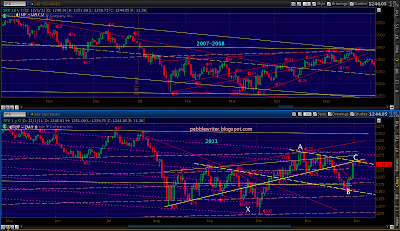 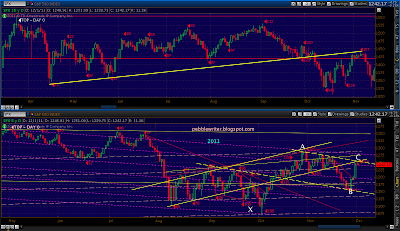 Next, the parallel, downward-sloping channels (purple, dashed) that have guided this market since last February argue for a reversal right about here.  The line currently in play got the party started when it stopped the Feb 18 advance. 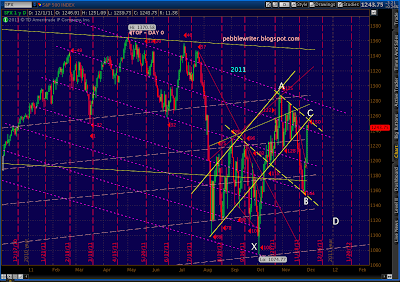 It subsequently stopped the April advance, several May declines, a June advance, the initial July decline and movements both ways of 8 of the past 28 sessions. There’s something very symmetrically pleasing about a trend line that extends from the first day to the last day of a market top.

Last, when we add parallel trend lines to those which define the above-mentioned triangle, we can see pretty nicely defined channels.  The pair of solid yellow lines guided the market up from the August lows.  The pair of dashed yellow lines have guided the decline since the 1292 high.  This channel also argues for a reversal at this point.

The day is young, but we’re establishing a candle pattern that looks suspiciously like those of Jul 22, Aug 22, October 28 and Nov 25.  I’ve taken profits on most of my long positions and am easing into an overall short position.  If I don’t see a resumption of the upside momentum muy pronto, I’ll likely set up for a fairly strong reversal in the next day or two.