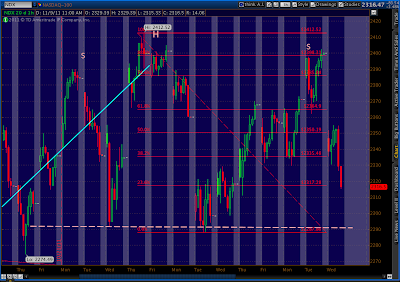 Guess that worked out okay.   I had no idea when I posted — just before falling into bed last night — that the market would nosedive only 90 minutes later.

That’s the thing about technical analysis.  It works extremely well at forecasting moves that, after the fact, are always credited to some other headline-making event.  Like the straight man in comedy, or the point guard that delivers the assist for the MVP’s dunk.   It’s the Rodney Dangerfield of investing.

Now, the bigger question of whether this is the start of wave 3 or the completion of a strong B wave, with a final push to 1307-1313 to come.  If we arrest before 1215, there’s a very good chance that we’ll go on to complete a big Butterfly pattern, seen below: 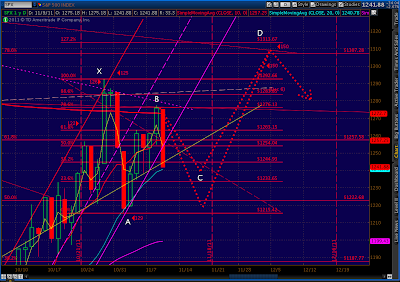 Butterflies have a .786 Point B and typically extend out to the 1.272 Fib (although occasionally to the 1.618 which would be 1340.)  The key is where Point C lands.  It could go as low as A, but shouldn’t be any lower (with rare exception.)  In fact, 1215 is my defacto line in the sand to determine whether we have one last leg up or not.

Here’s an update on EUR/USD.  I haven’t had to touch this chart in weeks.  The channel continues to hold like a charm.  Note that it’s the same slope as the previous channels that contained major moves.  Don’t see any need to toy with it, now. 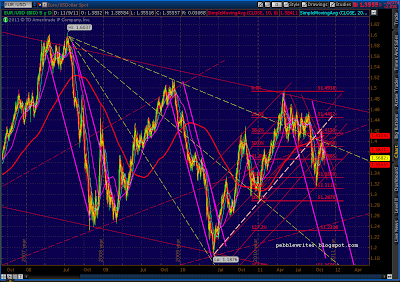 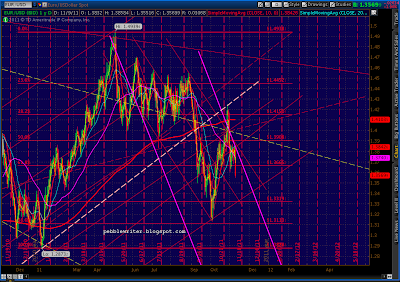 I’m looking for a reversal at 1276-1278 after completing our bearish Gartley and Butterfly patterns.  Short-term targets range from 1214 to 1238.  For more, see yesterday’s post.

Here’s an updated chart reflecting the 2011 v 2008 analog we’ve been following since May.  We’ve gone over this so many times over these past six months, everyone’s probably pretty sick of it.  But, I have a feeling it’s not quite done with us. 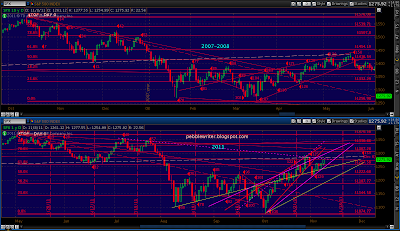 There have been three primary divergences between the two tops: (a) the depth of the initial plunge (days 57-69); (b) the rise instead of a decline around day 85; and, (c) the slope of the rise since day 108.   The fact that we diverged in a meaningful way around day 85, but then came back and resumed following the 2008 market point-by-point leads me to believe we could be experiencing another, similar divergence.

IF in fact that’s what’s happening, it’s worth looking at the potential rising wedges for the last act of this wave 2.    Here’s a closeup of the 2011 market — the bottom half of the comparison shown above: 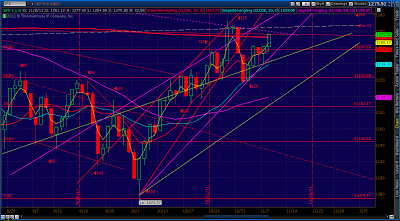 The yellow rising wedge (with nothing much in it) is my approximation of where the 2008 market went during wave 2.  In other words, it’s where the market would have been had there been no divergence during this period.

The purple rising wedge captures pretty well the wave 2 action — except for the Oct 27-31 departure that is a pretty obvious divergence from the 2008 pattern.

And, the red rising wedge is the one we’ve experienced so far, Oct 27-31 and all.  The key difference is that it treats the early November rise as a backtest —  a reality if 1292 was, indeed the wave 2 top.

Maybe it’s something else entirely.  For instance, if you clear out everything but the bottom of the purple and top of the red wedges, you get two precisely parallel lines that form a pretty decent looking channel.  The channel midline even works pretty well. 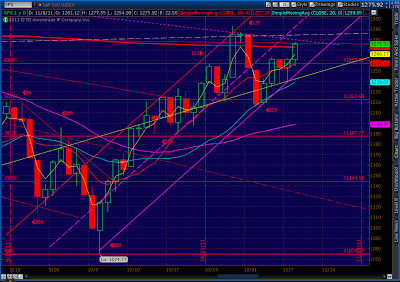 So, which is it?  From a casual perusal of fellow forecasters, I’d say there’s plenty of confusion to go around.   In all candor, there are good arguments for each, offered by people whose work I respect. 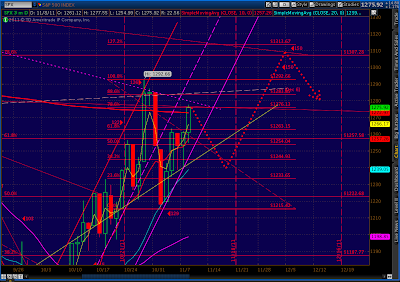