As all my regulars know, I love trend lines on RSI charts.  The VIX daily chart shows clearly just how valuable they can be.  Notice how clearly the yellow TLs guided VIX to its highs during the July crash.  And, the purple TLs guided it back down.  Now, we’ve broken out through the purple TLs and are following the red TLs up again. 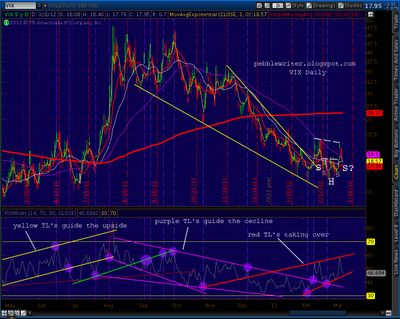 The purple circles mark many of the important reversals, break outs, shifts from one channel to another and back tests.  Here’s a close up, showing just how effective they can be.  Any guesses as to what will happen when we next tag the red line (at the bright blue oval)? 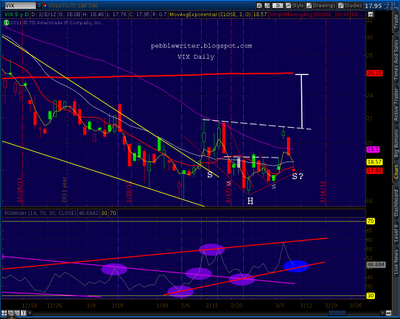 I’ll be the first to admit that forecasting with RSI TL’s can seem a little like reading tea leaves or throwing bones.  But, more often than not, it’s helped me identify important events before they occur.  And, that’s pretty fun stuff.

I’m working this weekend to get the new website up. Take a moment to sign up as a follower of this blog; regulars will be offered preferential rates. And, while we’re on that topic, I’d like to offer the reader who comes closest to picking the price at which SPX closes on March 16, 2012 a free one-year subscription. Post your best guess in the Comments Section for all to see by this Sunday at 5pm PST.

Oh, and here’s a nice little article about TVIX.  Good blog in general, it seems.

VIX completing a back test and right shoulder for IH&S? 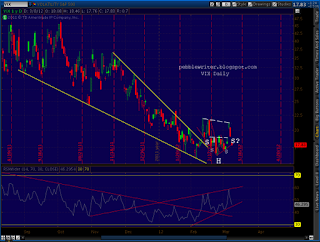 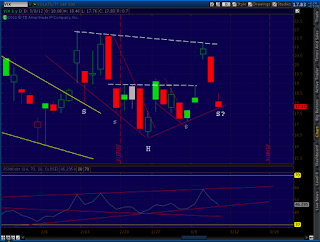 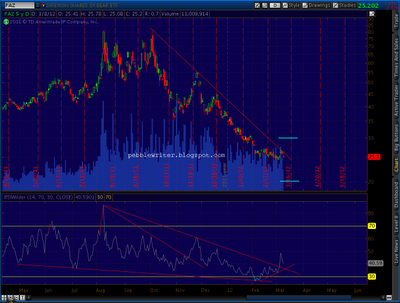 FAZ is right up against a TL that dates back to October 4.  Its RSI has broken out to the upside.  I expect a big drop if the market rallies further, or a large increase in the event this rally is nothing more.

We’re pushing a little higher, topping 1365.  I suspect it’s an overshoot of the indicators mentioned an hour ago, but am watching closely.  Several positions in which we had gains are at break even.

The daily chart continues to look bearish to me.  In particular, I’m drawn to the daily RSI, which has completed a back test of the broken TL (yellow, dashed). 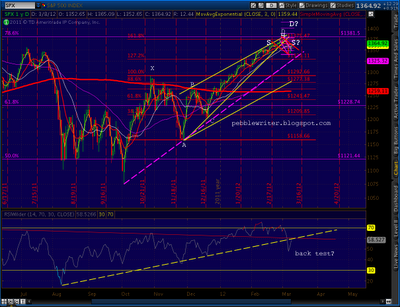 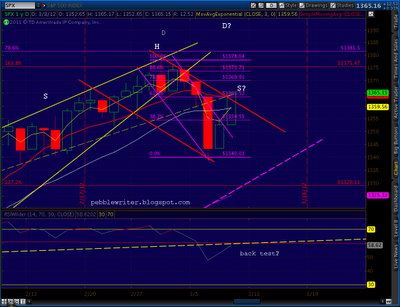 This seems like an excellent spot for the rally to fizzle.  We’ve retraced .618 of the drop from the presumed top (1378.04) and have bumped up against the channel I theorized about yesterday.  Furthermore, 60-min RSI is tagging the TL that’s marked previous tops.  And, last we’ve completed a back test of the broadening ascending wedge (megaphone) that’s formed since Feb 1, and the SMA 10 is just ahead at 1364. 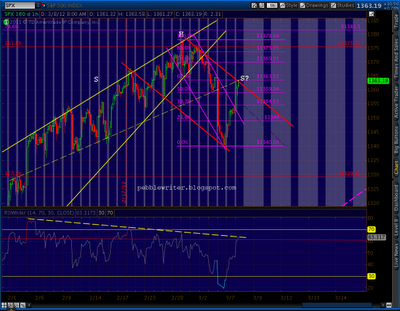 I’ve added to several of my ETF positions in the model portfolio:

Initiated a new position in the bearish financial ETF FAZ:

And closed the remainder of my SPY Mar 135 calls for a nice gain.

Lovely day for a gap and crap?

Big ramp overnight, follow-through to yesterday’s masterful ramp job that put the brakes on the downturn which began Tuesday.  Apparently, someone forgot to tell the guys at DOL — which just reported an increase in initial claims.

Ignore the seasonally manipulated numbers and focus, instead, on the raw data, which relects a 31,513 increase from the prior week.  That’s a 9.4% increase, which the markets will not like.

We discussed yesterday the possibility of a gap close from Tuesday’s plunge.  We’d need to reach 1359.13, which is going to be challenging unless the futures can hold on until the opening bell.  Eminis, which topped out at 1360, just broke their 60-min RSI TL. 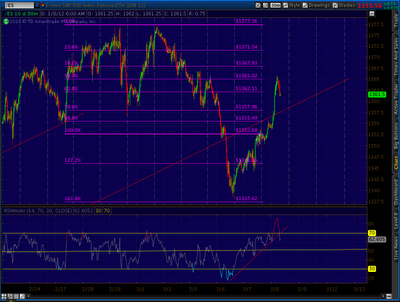 On the EZ front, despite CNBS’s rosy headlines…