Closing positions for the day. 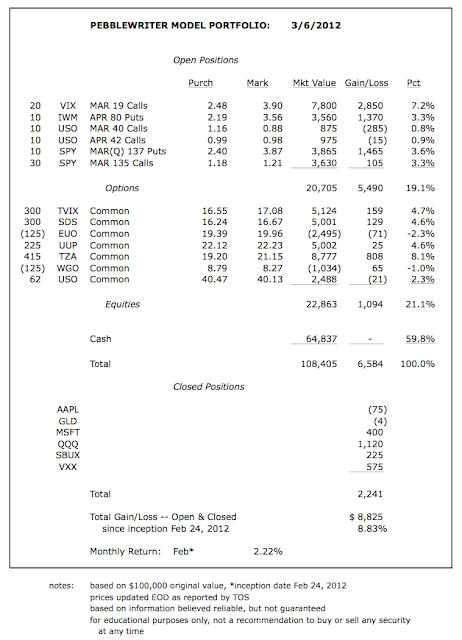 I will likely close out the USO Mar 40 calls in the morning.  I opened a position of 30 SPY Mar 135 calls towards the end of the day strictly as a hedge, to play the bounce I saw developing.  They largely negate my portfolio’s short bias, as I expect at least some bounce (1355?) by tomorrow morning — perhaps a result of overnight news designed to stabilize the markets?

In any case, we’re at a pivot point that might serve as a neckline for the next H&S pattern to shape up, and we’ve yet to see a meaningful back test of the recently broken TLs. 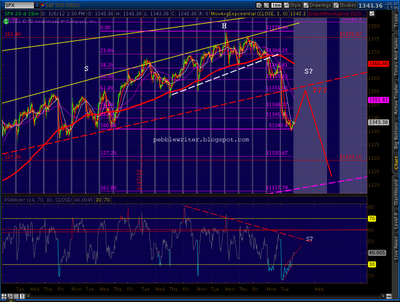 We’re currently at 19% for the options portion of the portfolio.  This will be reduced to our target 15% when the SPY and USO calls are closed out.  VIX is also due for a breather, and might deserve a little trimming back.

I will shift much of this to ETFs in the next few days now that I see a sustainable trend to the downside.  Keep an eye on news in the morning — euro zone, of course, but also the ADP employment figures (pathetically always great) and crude inventories.  Oil is still a huge wildcard with respect to GDP both here and abroad. 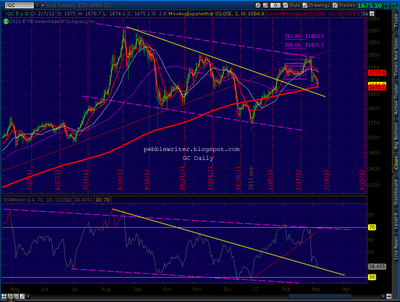 We got a $39 bounce, and have since eased down to the SMA 200 (closed at 1675 after an intra-day low of 1663.)  Also at this level, we’re back testing a fan line off the August highs and an important internal RSI TL (both shown in solid yellow.)  While gold is certainly vulnerable here, I’m leery of a flag pattern breakout, and will wait for things to sort themselves out before committing to a new position. 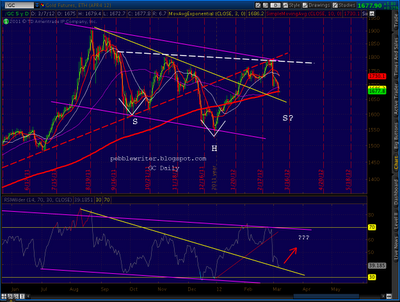 The bullish scenario, if it were to play out, would see a bounce off the fan line and completion of a big inverse H&S pattern coinciding with a breakout of the flag.  Such a scenario could see GC up to 2055 if we were to get back to the neckline at around 1780.  Note: this is not a forecast, just thinking out loud.  It’ll start to seem more a serious possibility if we bounce off the fan line over the next few days.

Possible bounce coming at 1337-1340.  Might play the bounce if the intra-day charts indicate.

On the news front, an event everyone’s been wondering about…. Ireland to postpone its next interest payment.  As every parent knows, once you let one kid get away with something, it’s usually about a nano-second before the other kid cries foul.  This one payment from Ireland isn’t enough to do serious damage, of course, but the precedent is very, very dangerous.

To torture the metaphor, the other kids are all watching…wondering why Greece always gets away with it.  Bankers are only too keen to stick to the deal; their allegiance is to the CB’s.  But, if someone comes along and stirs up voters to the point where they toss out the bums who sold them out, watch out. 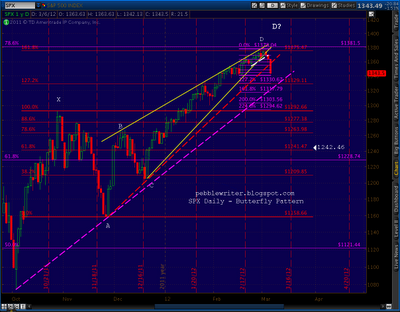 We’ve broken both the rising triangle (yellow) and the secondary supporting TL (red, dashed.)  Just below is the TL off the October 1074.77 lows (purple, dashed.)  It looks to be around 1325 currently.

This is also reasonably close to the .618 of the giant Gartley we’ve formed since the Oct 2007 top which targeted 1381.50.  I find it really interesting that SPX failed to reach it yet again — missing by 3 points this time versus 11 last May.   Coming that close to a pattern ideal point D, BTW, is a hit — not a miss — when you’ve traveled 1622 points to get there (dropped 910 and subsequently rose 712 points.)

The 60-min RSI has hit a TL going back to last August (red, dashed.)  In each previous case, the initial tag proved to be an interim low.  Following a bounce, the index went on to make a new lower low while the RSI made a higher low — setting up positive divergence.  This pattern can help in determining when to take profits on or add to our shorts. 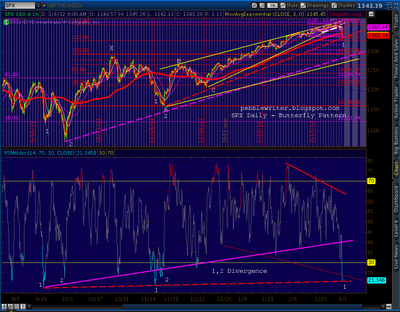 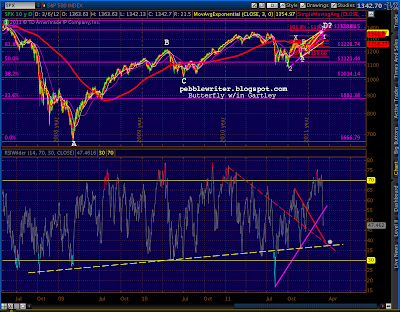 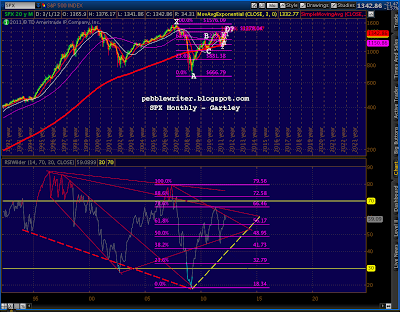 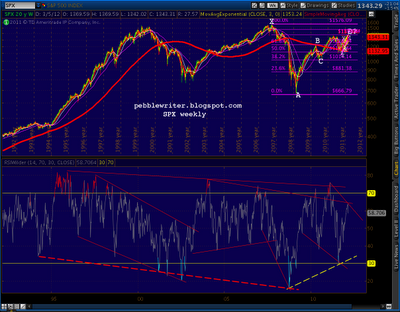 I’m going ahead and taking profits on the QQQ Mar 65 puts — just to throttle back the option exposure in our portfolio and because they expire next Friday.  The profit is just shy of 50% —  $1,130 on a $2,400 investment.

I’m also extending the USO option position out with 10 APR 42 calls.  Although CL is down 1.25%, we got a nice bounce off the SMA 20 and an internal RSI TL on the daily chart.  With our USO position at roughly break even, and the existing option position off less than 20%, I’m inclined to give CL a little more rope — but just a little. 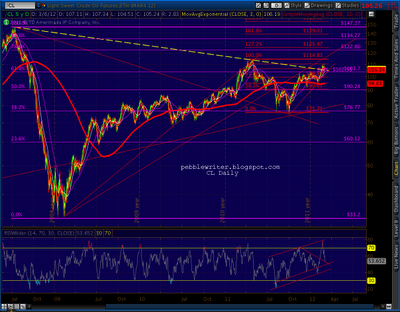 I’m giving it the benefit of the doubt primarily because of the fan line from the 2008 high (yellow, dashed.)  We broke through it on Feb 21 and appear to be back testing it. 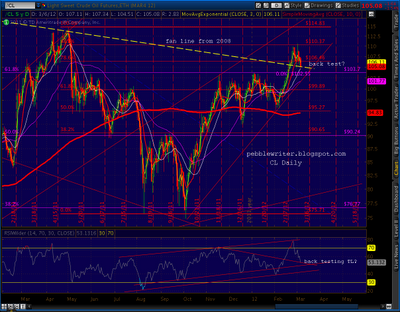 Thrilled to see a serious sell-off overnight, but watch for a bounce.  The daily RSI on the e-minis is tagging a long-term trend line right here. 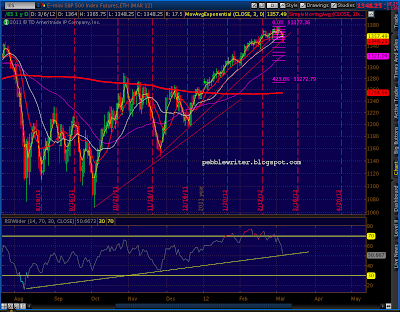