VIX slumped another point today, trading near its intraday lows of 18.75.  This is the kind of capitulation we want in order to see a top in stocks.  The small H&S pattern we were watching has busted, and the Bat pattern has started looking off.  I’ve moved my Point X back to July 1.  Starting at 15.12 gives us a .886 of 18.87 — very close to current values. 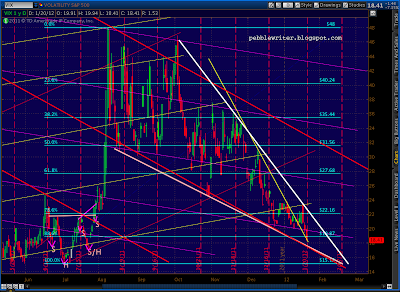 Beware: the larger falling wedge is still very much intact, signalling a upcoming surge in volatility.  And, hat tip to SoulJester who correctly points out the Gartley on VXX, the VIX ETF. 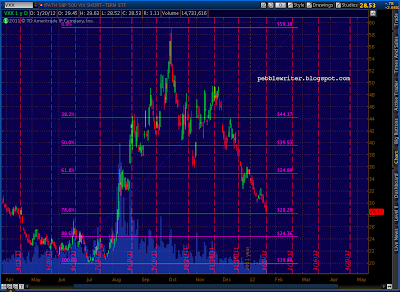 Checking in on XLF, it just scored a double top — coming within pennies of the Oct 27 high (last time the Greece problem was “solved.”)  It blows the smaller Bat pattern we were watching, but I’ll take a double top any day. 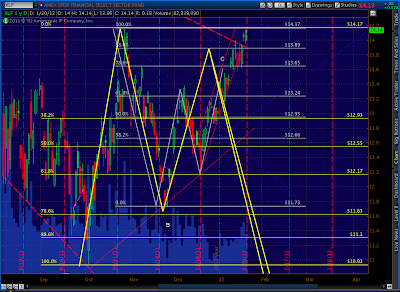 Quick update on Gold…   Note the long term trend line (red, dashed) underlying the rise from the past five years or so.  In July, we split off from the trend and started a formation that’s resulted in several fan lines (white, dashed) being formed, tested, and broken. 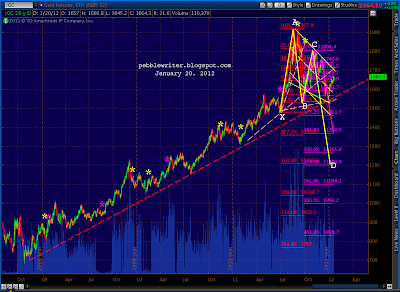 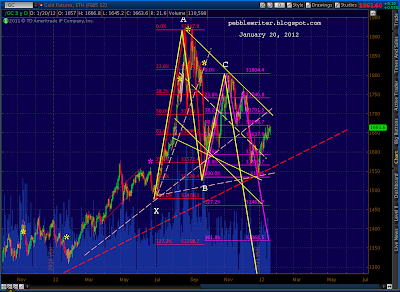 The latest intersects with the Dec 29 low, at which point we saw a $145 bounce.  I expect the bounce to fail as prices back test the 2nd fan line somewhere south of its intersection with the channel that’s been guiding prices downward since August.  Currently, that would be around 1700. 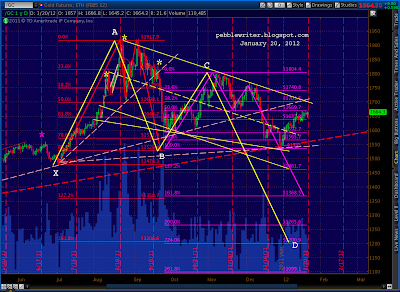 If we do get a reversal there, the latest Crab pattern (purple) should continue to play out to 1368 and eventually complete the even larger Crab pattern (yellow) to 1200.   For the first, that would mean a C leg down slightly longer than the A wave down from 1926.  For the latter, of course, it’s a 1.618 extension.

My gut is that gold will accompany stocks down on this next little excursion to bear country, complete an A-B-C correction, then resume its bull market when the Fed takes action to “fix” things.

The first line in the sand, of course, is the channel line at 1700.  If we can break out of the channel — only 37 away — then the next test is the previous high of 1804.  If we break either the fan line or, more importantly the red trend line, the correction is on.

AUDUSD has finally pushed above the channel line — even if just a little.  Recall we’re looking for a final push as high as 1.0519 – 1.0534 to complete both a large scale Gartley (shown in purple) and smaller scale Crab (red).  [see: Jan 18 post] Given the squeeze going on in its RSI, I would view the completion of these two patterns a blow off top of sorts, and if history is any guide, synchronous with a top in equities. 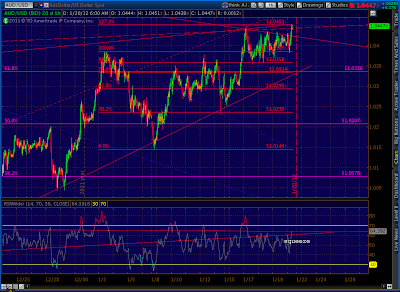 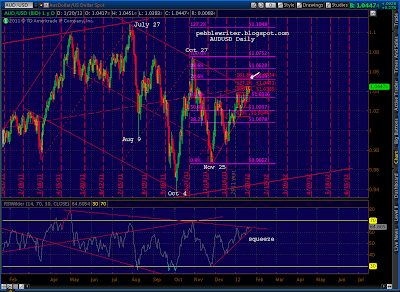 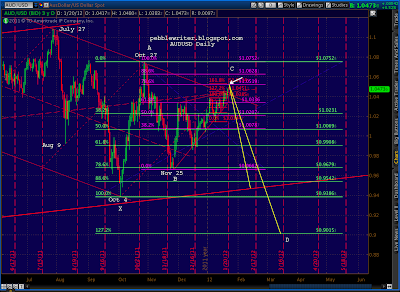 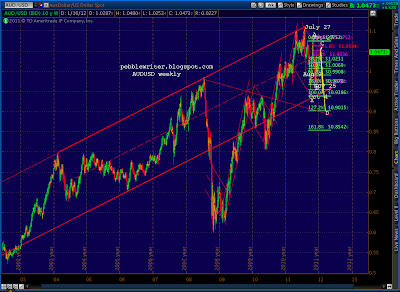 We’ve seen the reaction we were expecting on EURUSD, a reversal off the two channel lines.  If the rumors about Greece are true, we’ll likely see a spike higher.  But, really; how many times have we been led down this path? 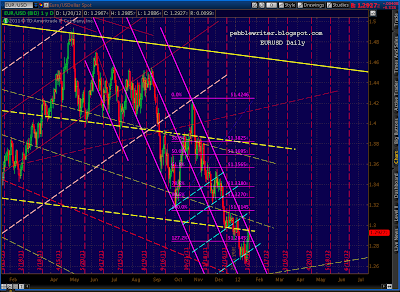 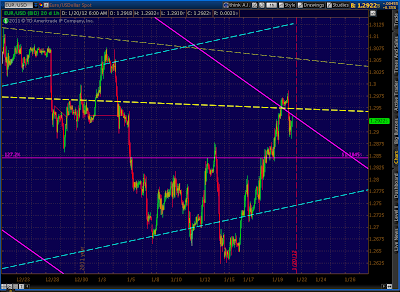 Though, it would fit nicely with the idea of a push slightly higher in stocks — the Butterfly completion at 1329 —  as would the AUDUSD pattern completion mentioned above.