↓
Home Menu ↓
Skip to primary content
Skip to secondary content
Home→Charts I'm Watching→Charts I’m Watching: January 10, 2012
UPDATE:  3:20 PM
VIX showing strong positive divergence and a solid touch of the same trend line that marked the Jul 7 low at 15.3.   It has completed a double bottom, just like SPX’s double top, and has also pushed into the lower bound of its Bollinger Band.
There are at most 10-15 sessions until the actual apex of the falling wedge, but it would be extremely unusual to go the full distance.  More typical is 2/3 of the distance — which we have already covered. 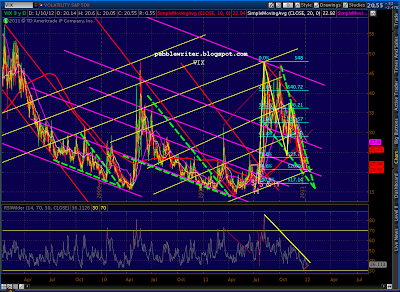 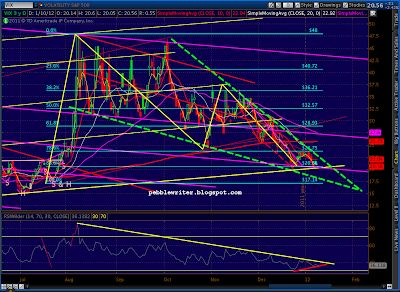 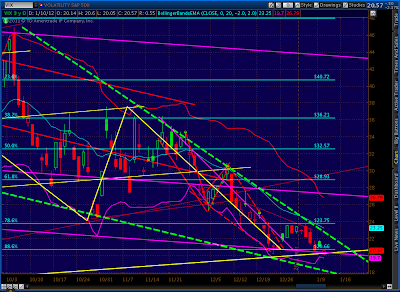 SPX has gone nowhere since this morning’s ramp.  Interesting that it’s picked this particular spot at which to rest.  Since touches can be rather eventful,  I’ll call it the Third Rail. 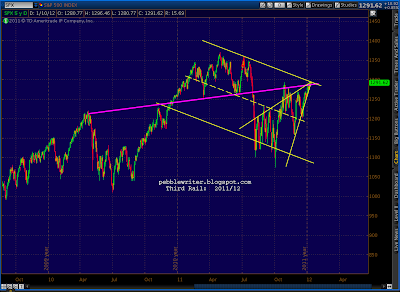 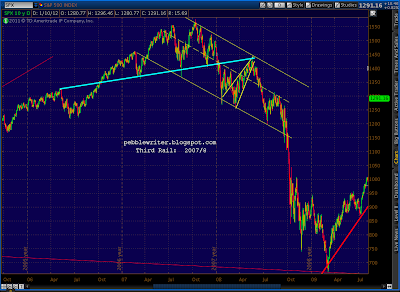 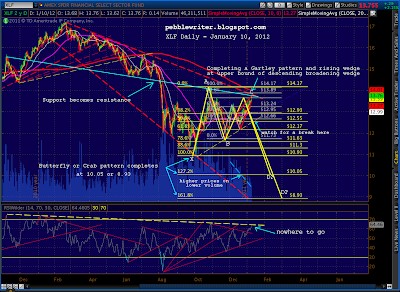 UPDATE:   2:30 AM
I like to watch the McClellan Oscillator for signs of tops.  The tell-tale sign of an impending reversal is a large three (or more) wave pattern that’s concave to the right of the time line.  Imagine a big “M” with 6+ legs instead of 4, with the right side tilted up — something like this: 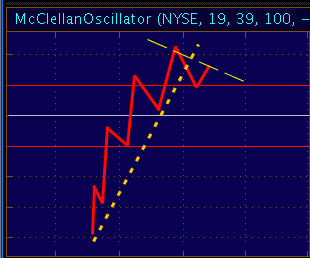 More often than not, this is a great setup for a top.  The chart below shows some of the instances where the pattern paid off with a sizable drop in SPX. 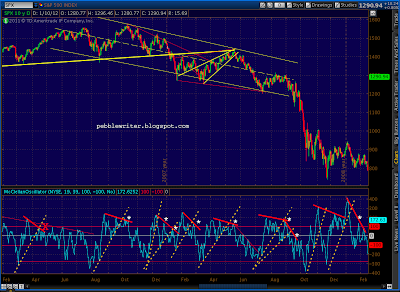 Note that many of the biggest moves came on a failure to make a new high — a lower peak (indicating negative divergence) that backtests the previous trend line.  I’ve marked these with a white asterisk.  Only one clear signal failed in the 2007-8 topping pattern – marked here with a big red “X.”
In general, the signal works best when:
The pattern that’s unfolding now meets the above requirements.  There is obvious negative divergence vis-a-vis the Oct 27 high; two patterns are converging; the recent highs and lows are in the right range;
the backtest is to a high point of 170+; and, the pattern has taken over 4 months to build up. 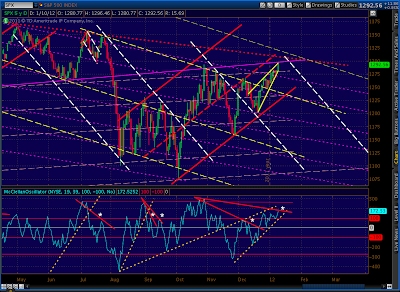 I consider this signal active, i.e. the conditions are right for a sizable sell-off.   It’s worth keeping an eye on.
UPDATE:  9:45 AM
We’ve satisfied the higher than 1292 price requirement that, according to Daneric, is necessary for a double zig zag.  He’s forgotten more about Elliott Wave than I’ll ever know, so let’s go with that.
The Crab pattern I was watching pre-open on the e-minis will complete on SPX at 1296.  So, we should see a strong reversal there. 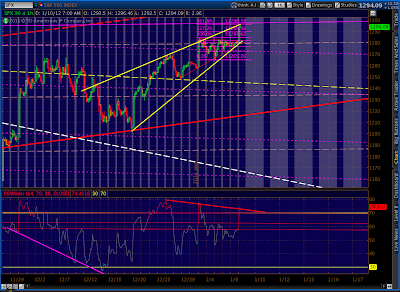 In addition, the RSI on the daily chart reached the 61.9 level intraday.  Recall that we were watching for a .886 retracement to complete a Bat pattern as has occurred on each of the previous three big pullbacks.  I’ll be watching to see if it closes at 61.9 or better. 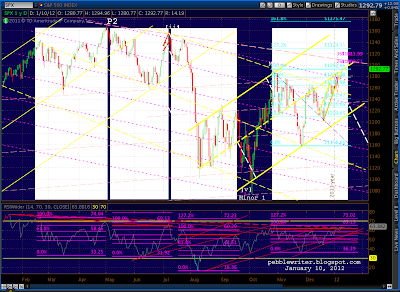 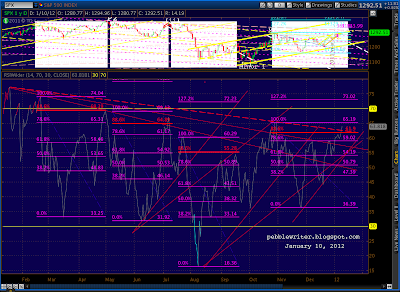 Last, negative divergence — which is almost always present when we get a blow-off top like this — is present in the 60-min time frame, and everything shorter than that, too.

It’s entirely possible we’ll head up to 1307, but even at 1295, we’ve hit all the targets necessary for the alternative Wave 2 formation to be considered complete.

After several days of virtually no movement, looks like we might finally get a resolution to the pattern.  Recall that since before we labelled the Oct 27 1292 high as the Wave 2 high, we’ve had an alternative high of up to 1307-1313 based on an important trend line that connects May 2 with the July highs.  It’s shown as the red dotted line in the chart below. 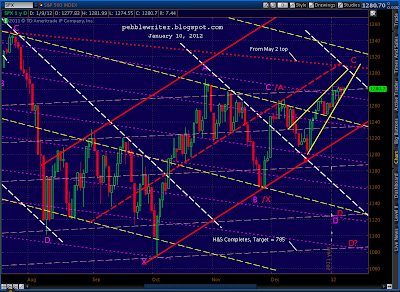 It sits at the top of a rising wedge that also happens to coincide with the termination of a bearish Bat pattern playing out on the e-minis.  In the futures, the 1.618 Fib is right at 1307. 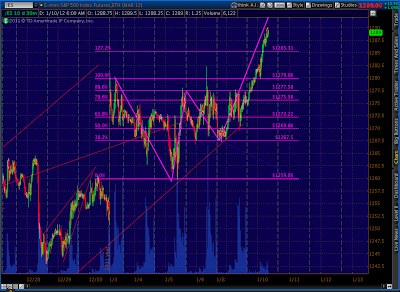 We can hit or even slightly exceed 1292 and still see the previously identified harmonic patterns play out.  But, the important issue here is the almost certain reversal with the Crab, the rising wedge, horizontal resistance and the channel midline (red, dashed) all conspiring to put a stop to any further rises.