Consumer credit for December and Q4 was just released.   First, the manipulated adjusted numbers, the ones most financial journalists, the WSJ and CNBC will report:

Looks great, right?  Who wouldn’t get excited about a 9.3% increase in credit demand?  Think of all the iPad’s that’ll buy.  Here are the real numbers: 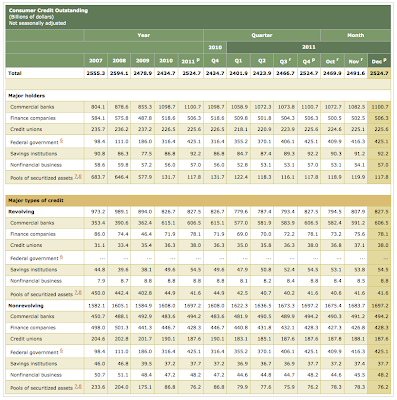 The nominal quarterly growth rates (versus prior quarter) are as follows.

In the 4th quarter,  credit card growth was 3X faster than non-revolving debt — that which typically accompanies larger ticket purchases that drive more sustainable growth in production.  Non-revolving debt growth slowed 37.5% from Q3 to Q4 — not the kind of stats recoveries are made from.

In light of Apple’s surge this morning, it’s no surprise that NDX is making a move.  However, it should be short-lived.  It has reached to within 37 points of its 1.272 on the big Butterfly pattern, 11 points on the smaller Butterfly and is very deep into a rising wedge with apex at these levels. 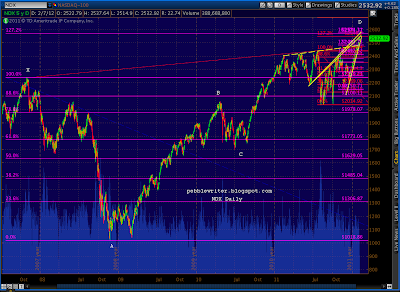 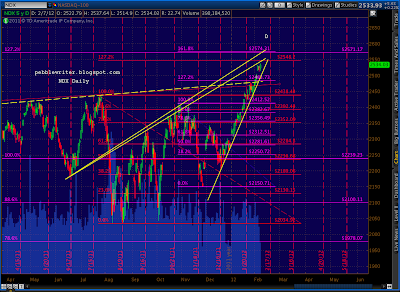 The NYSE Comp is closing in on completing a bearish Gartley pattern at the .786 Fib level of 8225.37 — just 1.8% above current prices.  I place much more credence in a broad index like this than the DJIA, which is struggling intraday to stay above its May 2011 high of 12876 — even as it completes a rising wedge and (as long as it stays below 12876) a double top. 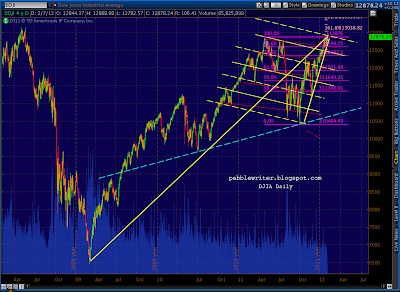 The USD is poised to rebound strongly.  It has back tested an important fan line from June 2010 (bold dashed white) that marked the 10/4 and 11/25 highs, as well as another important line (bold dashed yellow) from July 2008 that has stopped several declines. 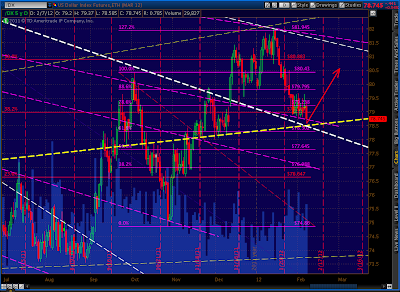 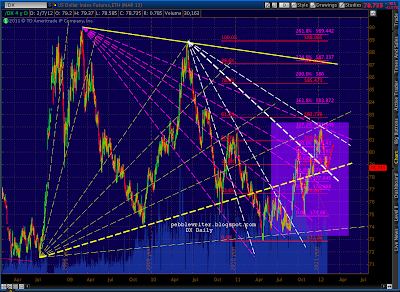 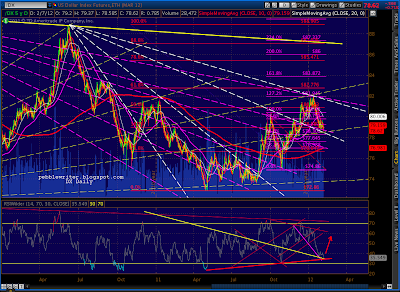 …and a completed bullish Butterfly pattern on the 60-min chart. 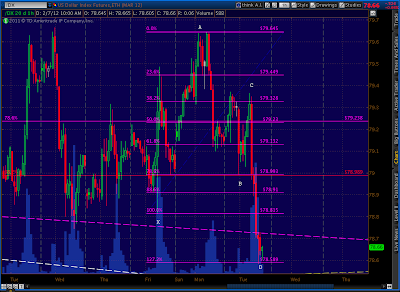 AAPL just completed its Crab pattern at 465.87 and is due for a decline that, at an initial .618 of the XA distance, would take it to the lower bound of its rising wedge — around 404, for a 65-point swoon.  There should be substantial support there, as well as the SMA-200 at 380. 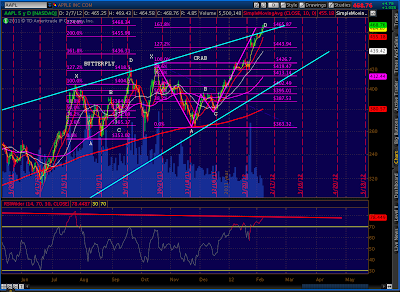 Like most of the rising wedges I’m watching, this one is long in the tooth and very far into the apex.  AAPL has actually exceeded its upper bound, is showing exceptional negative divergence, has tagged an RSI trend line going back to Apr 2010 — all of this on falling volume. 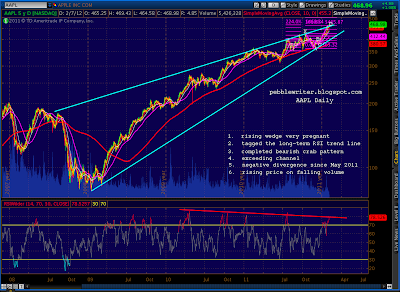 I love my Apple computers, but at these prices this market leader is looking downright buggy.  It should go without saying, but I’ll say it anyway: Apple has been a runaway freight train.  While these patterns indicate a significant downturn, this is one stock to be very cautious of when applying any bearish strategy.  Use stops.  Oh, and another thing… use stops.

The Euro, in the meantime, just touched an important Fib level on its corrective wave and tagged its daily RSI trend line. 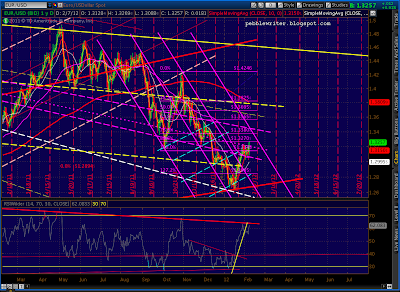 While the Greece situation is anything but settled, this could mark an important turning point.  This last run up was so steep, it wouldn’t take much to upset this apple cart. 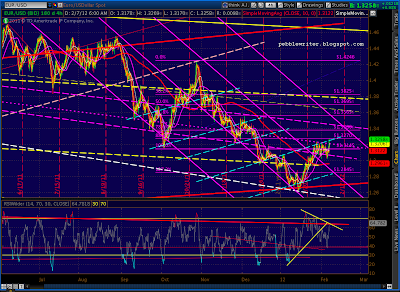 Note, also, that the diagonal (the dashed white lines) that marked the last step lower is now acting as resistance to the corrective wave up.  And, the RSI on the 4-hour chart is bearish in two different directions — as a top and a back test of the last month’s rise.

It’s been a little too quiet the past few sessions.  Neither bulls nor bears have been able to mount a sustained push.  Everyone, it seems, is spellbound by the drama playing out in Greece and the veracity of last week’s employment numbers.

I tend to believe Greece will ultimately fall in line.  The establishment’s threats have fallen on deaf ears, so it’s time to pull out the bribes — or maybe just pull out the checkbook and kick this particular can down the δρόμος.  It will be distasteful but, with the amount of money at stake, TPTB understand well the relative bargain.

There has been so much written about the employment numbers, it’s been hard to nail down the truth.   Many have accused the BLS of manipulating the numbers.  I think that goes without question.  Just look at the past year.  In almost every case, the revisions of previously released numbers have been less rosy — sometimes much less so.  The misses are anything but random.  On the other hand, the market seems content to accept the “good news” on face value, and sometimes there’s no convincing folks who are enjoying a lovely cruise that a life jacket should be kept close by.

I put much more faith in technical analysis than fundamental, but it’s interesting to note that only 59% of the 184 S&P 500 companies who’ve reported Q4 2011 earnings have beat expectations — a three year low.

Here’s the big picture in SPX just prior to the opening bell.  Note there are two possible fan lines from the Mar 09 bottom — one including the October 27 spike and the other which doesn’t. 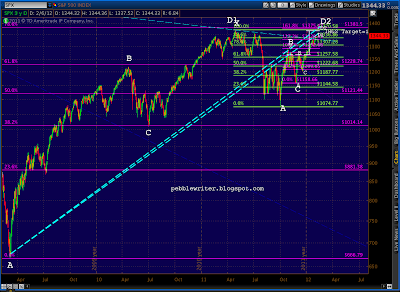 The fan line that ignores the spike has been met, meaning  — as we discussed last week — we could turn down any time now.  The other would allow a further increase in prices that, as of today, would match the May 1370 high and fulfill the 1367 inverse H&S target. 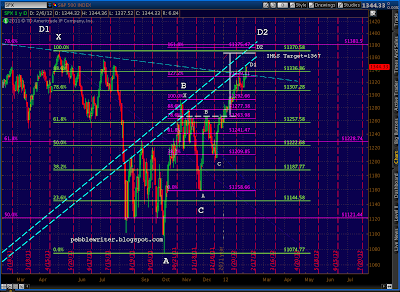 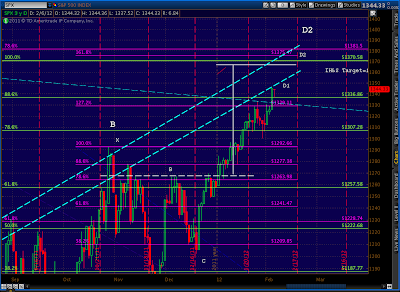 The rising wedge has filled out to nearly its most robust potential — taking into account Oct 27.  It’s very, very mature and clearly nudging its apex.  Keep an eye on the lower bound, as a break of this trend line will likely result in a decent decline.

The key level in a decline is 1292.  A breech will damage the most positive wave count. 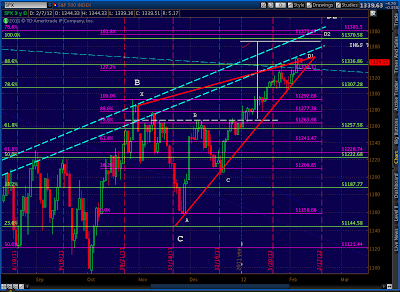 VIX continues its melt down, touching the lower bounds of its falling wedge within a falling wedge and remaining below a .886 retracement (18.11) of its run from 14 to 48. 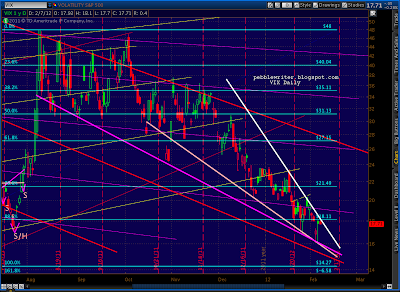