Revised H&S picture for SPX.  Whether this holds or not, we’ve clearly broken down below the rising wedge.  The trick will be to close below it and, specifically, below yesterday’s low of 1340.83. 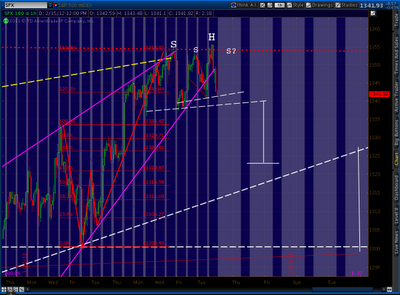 VIX just completed the IH&S pattern we’ve been watching for several weeks.  The nominal target is 25.85 — more than enough to feed the next biggest pattern up the food chain.  This, in turn, will feed a bigger pattern, etc.  See the big picture repercussions here. 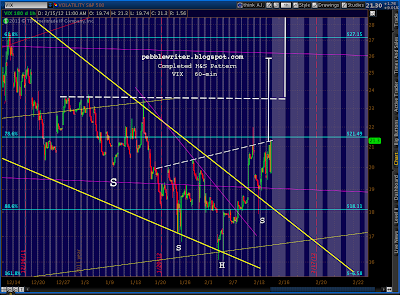 Looks like a beautiful shorting opportunity in Starbucks (SBUX.)  I can’t resist the Mar 46 puts at .42. 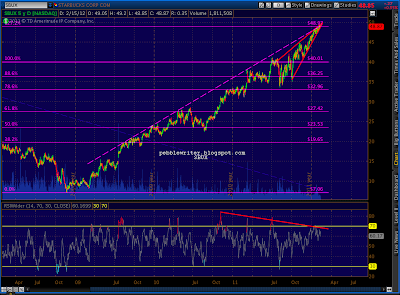 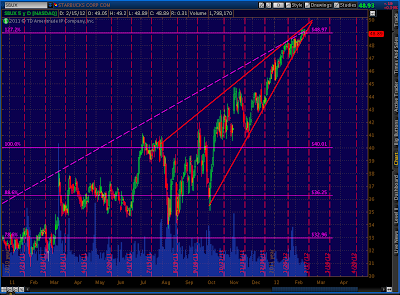 AAPL off to the races again today.  A reminder, 529.25 is the 2.618 extension on the big Crab pattern we’ve been watching [see: More Crabapples].  We’re also in nosebleed territory, having poked up through the trend line that dates back to 1994.  Look for a serious reversal, maybe enough to mark the top. 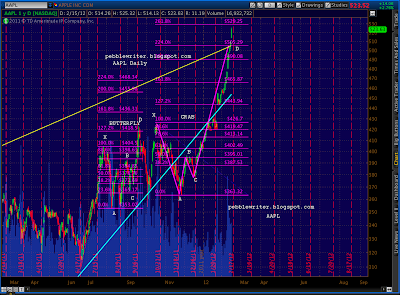 Well, that has to be one of the weirdest openings I can remember.  The futures were fading fast as the opening bell approached.  The cash market had little to no momentum at all, having reversed off the Butterfly pattern I discussed in the prior post.  It fell from 1358 to 1350.75 from 7:30 to 8:15, feeling trés motive, BTW. 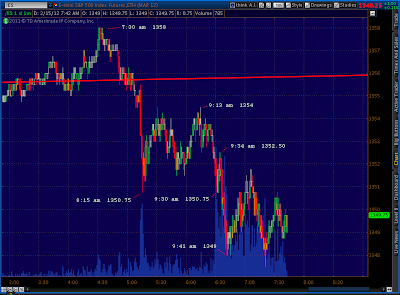 The cash market opened and market makers, recognizing the huge shooting star being formed in SPX, freaked out.  Not being the types to let a bearish pattern stand — especially with OPEX coming up in two days —  they threw everything including the kitchen sink into the market. 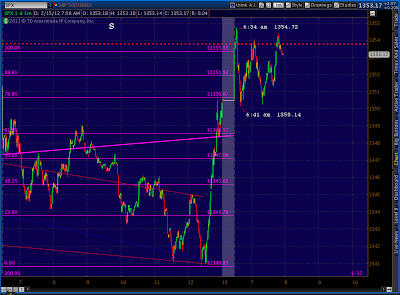 Does it kill the H&S pattern?  Yep.  It certainly sows seeds of doubt into the EW count, since we now have a higher high — scam turd though it may be.   If nothing else, it extends Wave 2 another hour/day/week until something too big to sweep under the rug comes along.

I almost forgot to mention…the news snippet that upset the bulls’ apple cart last night.  Among other things, it appears that TPTB across the pond aren’t so sure that the conditions they set for bailing out Greece were enough.  They’re “mulling whether to delay a full bailout package for the country [Greece] until after the country’s elections.”  In other words, they want the pledges of the currently elected officials and those who haven’t yet been appointed elected.

This is the EU version of demanding another shrubbery.  Demands to cut down the mightiest tree in the forest with a herring are sure to follow.

Right on cue, we get this priceless quote from Greek President Papoulias, who “tore into Germany’s finance minister, the Netherlands and Finland for taunting the country’s troubled recovery efforts as Athens fights to stay in the euro zone and avert default.” 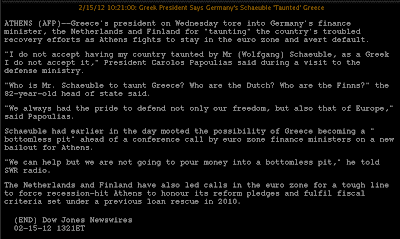 According to unnamed sources, Mr Schaeuble became quite agitated at Mr Papoulias’ reaction.  At great personal expense, I have obtained this secret footage of the exchange.

I posted the other day about the rising wedge on SPX and, specifically the eminis, commenting: “it has to break down or break out…something’s gotta give.”  Well, how about a break down and break out? 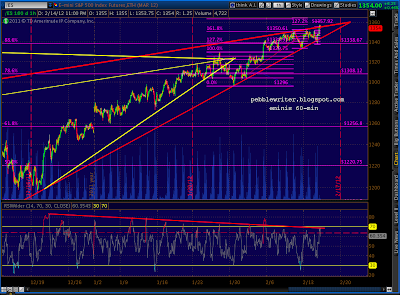 SPX broke below its rising wedge today.  Shortly before the close, it back tested the wedge, looking weak as it did so.  Then came the spike.  Apparently someone leaked the news that the Chinese had decided they could solve the world’s financial problems (or, at least Europe’s) and SPX spiked almost 10 points in a jiffy.

By the time the news was actually released several hours later, the eminis had spiked another 11 points.  As I write this, they have rallied so far as to complete a little Butterfly pattern at the 1.272 extension at 1355.75, so don’t be surprised if the whole thing reverses back to GO.

Looking at the cash market, the level at which we open matters a lot.  If we exceed 1354.32, the H&S pattern craps out — not the end of the world for bears, but it changes the count a bit.   Many EW practitioners have been calling for a slightly higher 5th wave to end Minor 2.  As long as we stay below 1370, all is well in Elliott World. 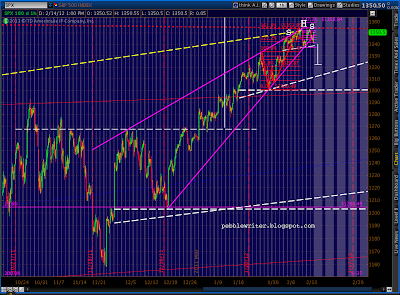 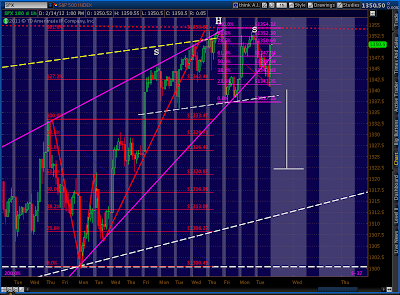 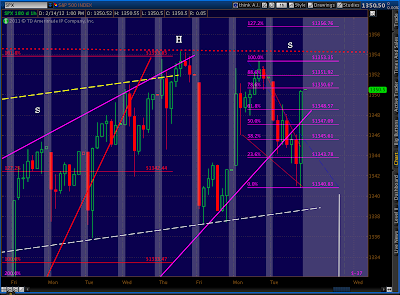 BTW, we’re seeing the same kind of divergence we saw 24 hours ago — with equities up much more than the corresponding anemic bump in EUR and AUD.  Don’t you suppose that if the euro problems were solved, we’d see more of a reaction in the currency than in US equities rather than less?  Just saying…