You can’t make this stuff up.

Seriously, it’s got all the elements of a Hollywood drama.    From today’s WSJ: 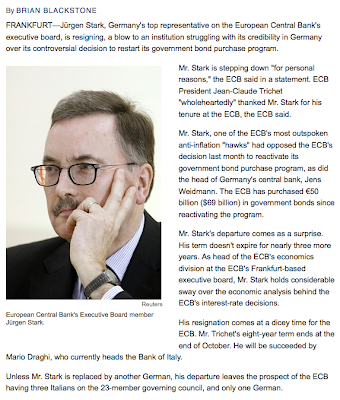 Jürgen Stark, chief economist (and chief hawk) of the ECB, just quit over the ECB’s decision to ramp up their version of QE.  It leaves three Italians on the governing council versus only one German.

That’s like putting the former head of Halliburton in charge of military purchases or the CEO of JP Morgan on the Board doling out TARP money, or…. you get the point.

The ECB’s continued existence depends on the Germans.  As Germans everywhere are wondering why they should be doling out their (sagging) Euros to their spendthrift cousins, this is one of those important plot twists.

If Trichet insists on whipping out the debt bazooka to battle what’s clearly an issue of too much debt already, Stark’s defection might end up looking like a fractal for the ECB itself.

Thank God we have no such problems here in the US, right Ben?