The weekly charts look abysmal, but there’s still the possibility that we’ll bounce off these levels for one last push.  In addition to the below-mentioned trendlines, the 50 day EMA and .618 fib lines would offer support at 1323.  And, am I the only one underwhelmed by the volume accompanying today’s decline?

Other considerations include TICK, DVOL TRIN and the A/D  — all of which have thus far failed to confirm the downturn.  Also, the USD is probably due for a bit of a breather. And, at this late hour, the hourly e-mini charts leave open the possibility of a near-term bottom.

The VIX is breaking out, as would be expected if the decline is real.  But, at these prices it has nearly completed a bearish Gartley Pattern that started on May 6.  Of course, bearish for VIX means bullish for stocks.  It would complement the bullish Bat Pattern detailed below.

Lastly, don’t discount the Fed’s determination to avert a crash.  We have some oft-manipulated economic indicators coming out in the morning (housing starts and building permits.) And, any positive news on the debt ceiling (or even QE3?) might turn things in a flash.

If the decline is arrested here, the market’s vulnerable to a short squeeze.  Given that Friday is OPEX, it’s easy to imagine one last turn of the screw for this past week’s put buyers.

Feels a bit like a bear fake-out to me.  Unfortunately, as a frequent victim, I have more than a passing acquaintance with how they feel.

If this support holds, we’ve either started or are about to start [v] of P[2] up for the final push to:

(c) 1410 —  the Supercycle line from the early 1990’s (The Biggest Baddest Trendline, also in the vicinity of the inverse H&S target.)

An alternative view is that this cycle decline will be on the lower end of the scale.  The smallest over the past 4 years was 3.88%, which would indicate 1315 or so.  That would also mark the lower bound of the Mar ’09 rising wedge.  If we stalled here at 1331, we’d be down only 2.9%.  Not bad, but not in keeping with the cycle pattern over the past 4 years.

The interesting thing about 1315 is that a decline that stalled there would result in a very well-formed Bullish Bat Pattern.  Such a pattern, if it played out, would take us back to 1370+  muy pronto.  I drew the following chart last Thursday, when Blogger was on the fritz.  (I incorrectly labeled it as a Gartley, kissin’ cousin of the Bat; a Gartley would have had a bigger retracement at point B.) 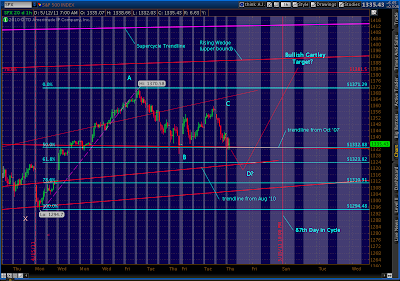 Which way do we go?  I see three possibilities:

Weekly MACD, RSI and STO are all trending down and show plenty of room on the downside before we’re oversold.  Make no mistake, this market is one sick puppy.  The only question is whether he limps over to the side of the road and croaks right here, or whether he’s got a little fight left in him.

We should know in the next day or so.