While it would be easy to jump on the P[3] bandwagon right about now (and it wouldn’t take much convincing) a note of caution is in order.

A pullback that stalls in the low 1320’s on SPX would leave a fairly well-formed bullish Bat Pattern. Point B should be a few points lower, allowing a fuller CD extension to .886, but these things are rarely perfectly formed.

Why should we care?  Bat Patterns work well in forecasting market moves.  It’s estimated they’re successful about 70% of the time — house odds, if you will.  The most recent notable example was on March 4.  After the market had nearly recovered from the previous 8 days’ mini-crash, many were expecting further gains.  A Gartley Pattern — close cousin to the Bat — correctly forecast an 80 point drop. 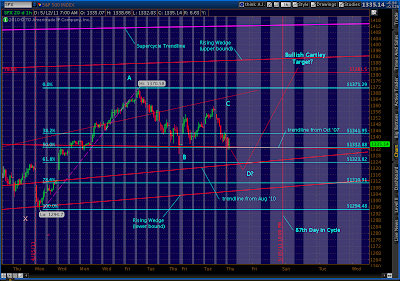