Apart from 20 adrenaline-soaked minutes of rumor-fueled overshoot, the rest of the day went exactly as scripted at 3:25 below.  We closed at 1261.01 instead of 1261 (sorry), completing the now A-B-C backtest of the megaphone and wringing out all but the gutsiest bears (or at least those on a bathroom break.) 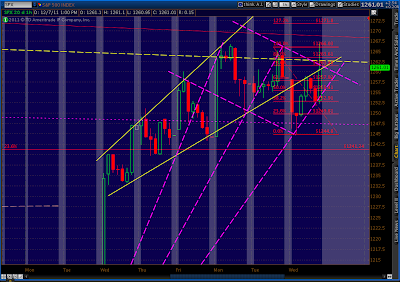 It isn’t exactly a Gartley, thanks to that 20-minute spike, but it closed within pennies of the .786, and clearly outside the megaphone pattern.  Can we ignore the overshoot?  It makes for a very nice downward-sloping channel if we do. 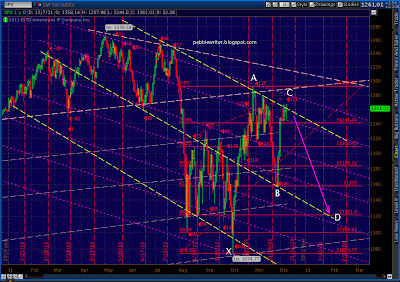 I know what you’re thinking… what about confirmation?  Is there any other indication of a reversal after today’s schizophrenic action?  Only if you count the Bat patterns on IWM, COMP and NDX. 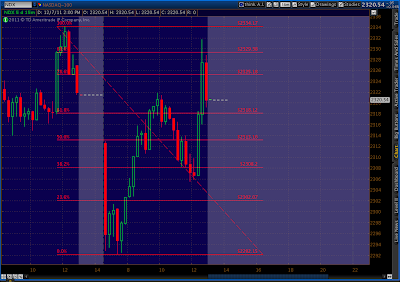 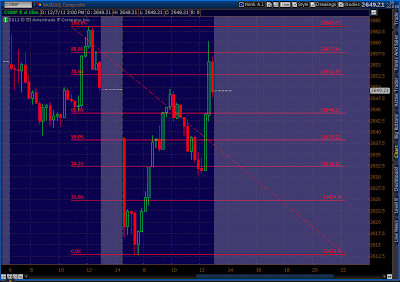 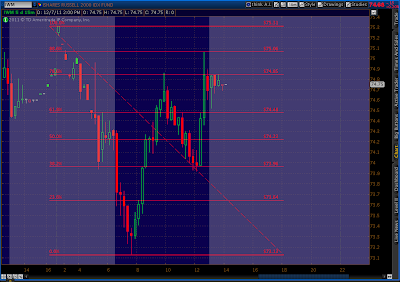 Oh, and the Butterfly on the DJIA. 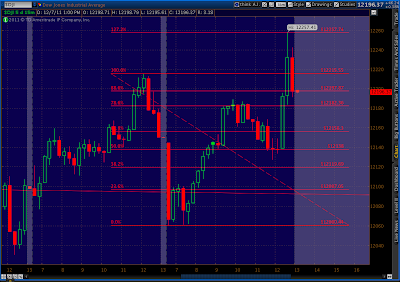 And the Gartley on AAPL. 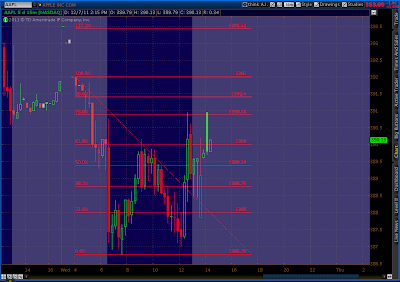 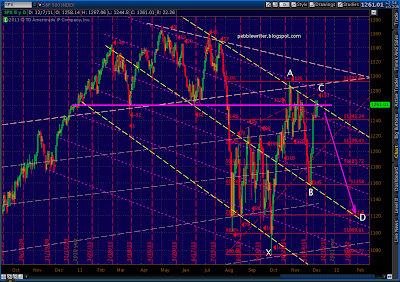 But, looking back further… 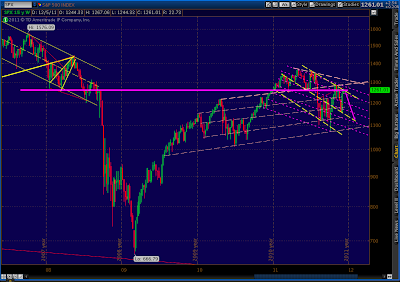 Just discovered another fractal worth keeping an eye on.  The period since October 4 has behaved very similarly to the Mar 16 – July 7 period. 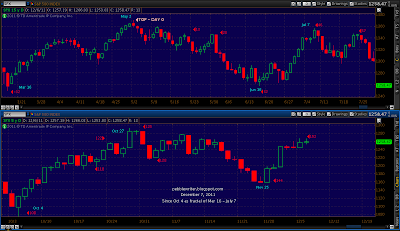 If the comparison were to hold, we’re due for a 30-50 point downturn in the next day or two, followed by a partial recovery and a strong sell-off next week.  The time ratio is about 2:3, meaning two days in the current market equals about three days in the prior.

Possible flies in the timing ointment are the euro zone summit this Friday (everything euro, actually) and OPEX next Friday.   Here’s a peek at the very similar megaphone pattern that set up on SPX in July.  The back test and subsequent 50 point fall correlate nicely my expectations for this market.

And, lastly, here’s a peek of the two together on the same 60-min chart.  Note, especially, the similar RSI pattern. 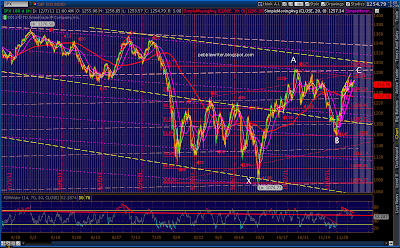 Here’s an update on the Gartley I’m expecting to take us down to at least 1121.  Seen on the weekly chart, with clearly defined channels and RSI meeting strong resistance, it’s a pretty compelling case IMO. 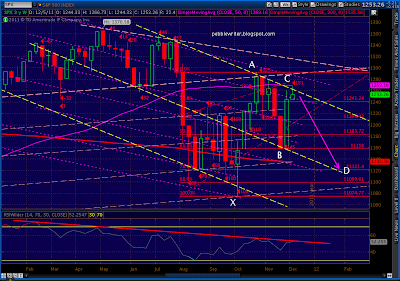 The market’s not about to go down without a fight.  On the face of it, I’d say this comeback raises doubts about an imminent decline.  We were supposed to back test the megaphone and head down, right?  Well… look where we are: 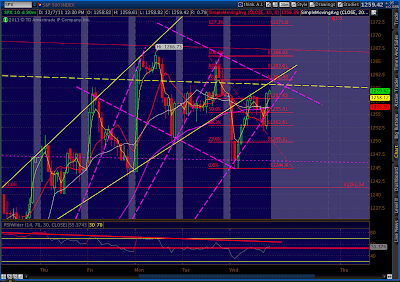 The backtest that could have completed with a simple touch at 1255 is instead working on a C leg of an A-B-C contratrend, and is signalling a Gartley at the .786 at 1261 before the downturn begins in earnest.   IMHO, this is merely an effort to flush out a few more remaining bears before it starts to really matter.

We will still have a lower high to go with the lower low, establishing a new downward sloping channel to boot.

So far, so good.  Today’s off to a good start as a proxy for July 7.  We broke down from the ascending broadening wedge, should back test and continue down. 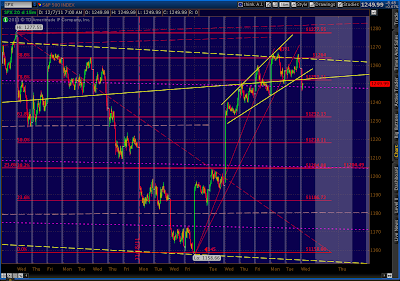 I’ve put the Fibonacci levels up for this past couple of weeks.  Although we reversed at the .886 level, this isn’t the strongest example of a Bat pattern I’ve ever charted.  The B and C points are there, but not all that discernible.

Nevertheless, a .618 AD retracement would take us all the way back to 1200, where one would expect a bounce anyway.

This morning’s decline also invalidates the large inverse H&S some were promoting.  (I’m not a believer in patterns with such tiny shoulders, so I didn’t share in their enthusiasm.) On the other hand, if we were to reverse somewhere around 1230, there exists the potential to form a proper IHS that would complete back at 1267 or so.

I think this would get a lot of people excited, just like similar moves did back in July and previously in December 2007.  Each of those IHS patterns trapped a lot of bulls when they came up 10 points shy of completion. [see: Ten Lousy Points.] 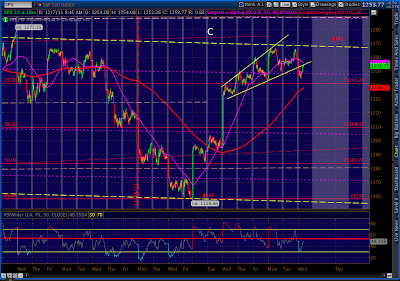 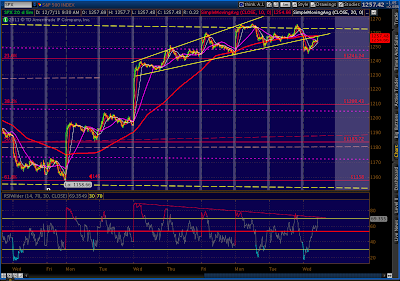 Still hanging around the 1255-1257 range in a back test of the megaphone.  Drew some fan lines, too, just for grins (purple dashed lines.)  Note the market’s reaction every time it breaks one —  a backtest and search for the next lower low. 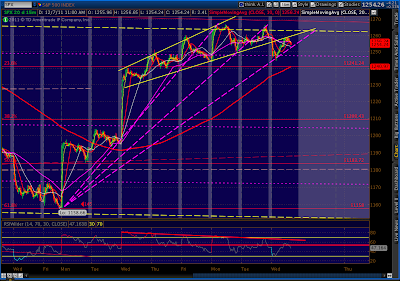 Note that, since the megaphone pattern tilts up to the right, the back test could conceivably run a little higher, too.  But, if I’ve drawn the last fan line correctly, the party’s over one way or the other either today or tomorrow.