Like SPX, BAC did very little for the rest of the day.  Unlike SPX, however, this meant a continuation of the slow, steady decline it started this morning.  While SPX traced out what is probably an ascending triangle, BAC has more of a pennant look to it, trending down on the day.  These patterns typically continue uptrends; but, neither is particularly well formed, so I won’t read too much into them. 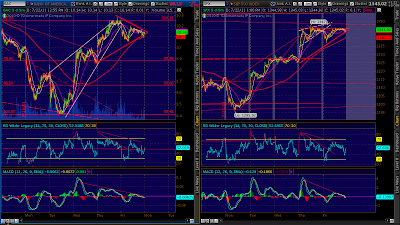 BAC hit the MA and has started back down.  The RSI recharged, made a lower high and is apparently on its way back down.  The histogram is turning negative.  A moment of truth is coming up, when the RSI hits the TL it broke through when it recharged.  It’s possible it bounces off that TL and goes on to make a higher high.  The weakness relative to SPX would argue otherwise.

Incidentally, in watching the 5-minute SPX chart, we seem to have broken out of a rising wedge Wednesday.  The backtest on Thursday failed.  In other words, it rose above the wedge and, in fact, started forming another one that broke down last night.

It appears we’re in backtest mode, but with much less gusto than occurred yesterday.  In fact, there’s a divergence setting up between the index and its RSI, MACD and Histogram.  While the index is making a run at a higher high, the indicators are all sloping downward.  In general, the indicators win out.  This action is normally indicative of a stock that’s ahead of itself and due for a correction. 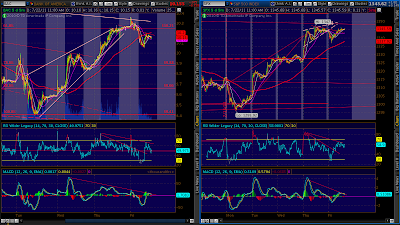 BAC complete the first wave down and is trying to rebound.  In a stronger stock, the retrace might make it back to the rising wedge TL in the form of a backtest.  Here, it will likely run into resistance at its 200 period moving average.  I’m watching the 5 minute chart, as it does a pretty good job of showing the short and medium term picture at the same time.

And, I use the RSI as a trading guide.  More often than not, when RSI is above 70 I start looking for a downturn; and, a level below 30 indicates a bottom.  But, because it’s only 5 minutes out of the day, it needs to “recharge” when it reaches either extreme.

I’m charting BAC alongside SPX in order to keep an eye on its relative performance.  So far, it seems to be having a tough time on a relative basis. 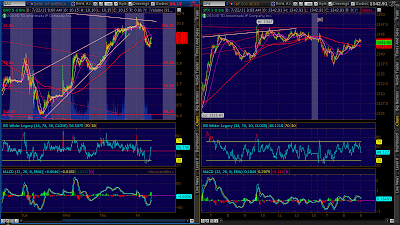 Bank of America has fallen from its rising wedge and is down .10 this morning.  The August 11 puts hit 1.00, for potential 10% profit in one day.  If only they were all this easy…

Ordinarily, I would take the 10% and run, but: (1) I expect it to fall further after backtesting the wedge; (2) BAC should really take it on the chin when the overall market tumbles; and, (3) I’m having too much fun. 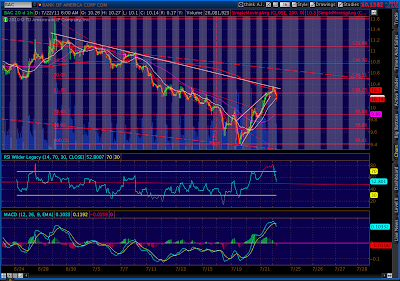 My price target on a breakdown from a falling wedge is the wedge’s inception.  In this case, it’s 9.40, which should put the puts at an intrinsic value of 1.60.