Whether you’re Toyota or an investor in distressed Japanese debt, the USD/JPY relationship has rocked your world over the past few years.  I’m no expert on the Japanese economy, but I find the Yen’s chart patterns pretty straight-forward.  First, the view from 35,000 feet:

The most prominent features are the falling channel and the falling wedge.  Note the channel (yellow, dashed) has a midline (purple) that’s completely taken over since 2001.

It forms the lower bounds of a falling wedge that dates back to 2007 or so.  As most investors know, falling wedges are a bulls best friend, because prices typically break out from their clutches sometime before the apex (the point at which the two lines converge.)

Thomas Bulkowski, one of my favorite sources on chart patterns, says the average lifespan of a falling wedge is 57-59% of the distance from inception to the apex.  That makes the Yen’s falling wedge quite the old geezer.  The apex is technically around June 2012 at around 73.50, and by any measure we’re 90-95% of the the way there.

So, what would a breakout look like?  Some think it just happened.  Looking at a little closer, there’s a wedge within the wedge — marked below in red.

On October 31, Japanese finance minister Azumi directed the central bank to sell about $100 billion dollar equivalent of Yen, sending it down nearly 5%.  The results can be seen below:

The hope was that taking a 5% bite out of speculators’ positions would make them think twice about accumulating/bidding up Yen — important when inflation has been running below zero (aka deflation) for years.  Depreciating the yen is the surest, fastest way to get inflation back to at least zero.

In any case, it almost worked.  The pair jumped out of the smaller, red falling wedge — only to be stopped cold by the upper boundary of the larger falling wedge.  It’s now in back test mode, which means it should backtest the red wedge (currently approx. 76) before resuming its climb.

Remember that with the USD/JPY, a bet on the strength of the Yen is a bet against the strength of the USD.  While a 5% jump is nothing to sneeze at, most currency traders will tell you that intervention has limited impact in the longer-term.   Lately, dollar strength has come as the result of plunging equity prices.

So, if the falling wedge is going to pay off in a big way, it could mean we face another sizable leg down in stocks in the very near future.   While it will likely result in another Aug 4th-like spike, the real question is whether it’ll stick.   That raises significant questions about the long-term prospects for the US economy, not to mention TPTB’s determination to continue devaluing the dollar (not hard to do, when they’re running the printing presses 24/7.)

If you see the glass as half-full, you might expect a US economic turnaround that includes positive growth, mildly increasing prices that ultimately result in higher interest rates and a climbing dollar.

If you see the glass as half-empty, you might expect a spike in the USD the next time the market crashes (early December, at the latest),  a worsening recession or outright depression, deflationary pressures across multiple asset classes and lower interest rates.

While these conditions will initially inflate the USD, its fate will ultimately rely on whether it’s able to retain its “least dirty shirt” status.   It might not, which would bring a whole new world of hurt down on Japan and its ballooning Yen.  I’ll be watching the falling wedge, as well as a channel that has an equally likely chance of playing out. If the USD/JPY can break out, it stands a good chance of reaching 95 in the next year or so. 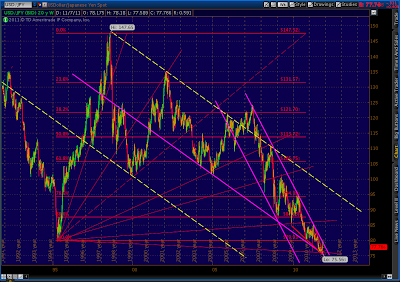