This bounce is lasting longer than I anticipated.  SLV experienced extraordinary volume trading during its decline:  988MM shares over 4 days, a big number as there are only 335MM outstanding.

Given that the ETF is now owned by a whole new crowd (or repurchased by those who sold last week), we can expect the new owners to behave a little differently.

First, they mostly bought in the mid-30’s, so they’re up slightly at these prices ($37.75.)  Good enough for a short-term trade.   Second, they shouldn’t be affected by those pesky margin calls as were last week’s owners.  Last, they’re traders.  If they were patriotic, died-in-the-wool EOTWAWKI silver holders, they would have already maxed out on their holdings (which would be in coins, bullion and old tooth fillings anyway.) 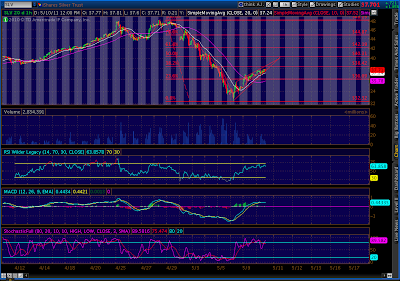 Absent any further manipulation by CME, I suspect the current bounce will be contained by resistance at 38.7.  There’s also a .382 fib off the 4/28 highs at 38.4, the 50-day moving average of 38.2 and the apparent rolling over of the MACD and RSI.  Last, trading has been confined since May 6 to a rising wedge with an apex at 39.6 the morning of May 11.

If SLV breaks down, it should return to test support at 30.6.