Friday’s action brought us closer to the apex on the SPX bullish falling wedge (60 minute chart).  In addition, there is divergence in the histogram, the stochastic and the RSI vis-a-vis the index. 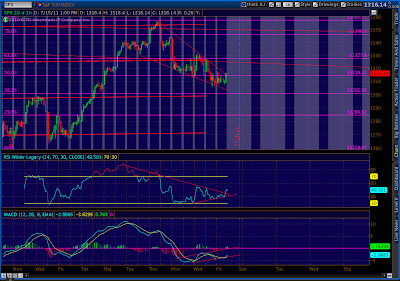 VIX broke out of its bearish falling wedge at the end of the day.  The technical indicators are flashing negative — positive for stocks. 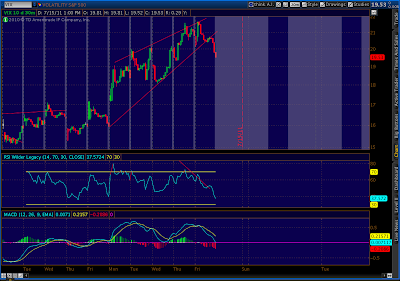 There is a bearish harmonic pattern forming on SPX — probably a crab — since Thursday of last week.  If it completes and plays out, it could knock the index back as low as 1300.  Such action would still leave the index in the falling wedge and would increase the odds of a stronger breakout to the upside.

If this were any other week, I would say we’re going up Monday, probably towards the 1345 area to set up a lower high.   This would be consistent with the 2007 pattern I’ve been tracking.  (I realize this is a long shot, with the E-minis down 10 at this hour.)

But, of course,  it’s not just any other week.  The entire financial world is waiting to see whether our fearless leaders can come to an agreement on the debt ceiling.  Any moves the market might otherwise have will likely be muted by the overhang of that pending news, much like the effect OPEX has.

I expect the news to be “positive,” meaning that they come to an agreement that will allow us to go another couple of trillion dollars into debt.  There should be a relief rally (as mentioned above), followed by a downturn as it dawns on people what this means for the economy long-term.

If some of the hard-core have their way, however, and an agreement either can’t be reached or is too modest in its spending cuts, all bets are off.  The sell-off will be swift and immediate.  It’s all about perception, and that’s the one thing the pols have proven themselves good at.

If there were ever a time to be neutral and/or sit on the sidelines, this is it.   I have very modest short-term bullish positions in place now, to go with my longer-term bearish positions.  If we break out to the upside on news, I will be looking to take profits, likely within 2-3 days, and position for a much larger downturn.

I’ll try to update this post before tomorrow’s opening.

One other note… Tom asked about gold the other day on another post.  I’m not a gold expert, but I do keep an eye on it from time to time.  I hadn’t in a while, so I though it would be worth checking the technical picture.  Here’s how I answered him:

I guess I’d separate the discussion into two parts: the fundamentals (what gold’s going to do thanks to the USD, EUR, hyperinflation, etc.) and the technical picture (ignoring all the possible external influences.)

It’s currently a little overbought, but has shown the ability to get real overbought, so I wouldn’t give that much credence.

Having said all that, the fundamental picture is, IMO, extremely complex — irrespective of timing. FWIW, I think the dollar’s in for a wild ride, but short-medium term should be up. If the SHTF, which I think it will, maybe GC benefits from that and all bets are off.

Lastly, if you believe – as I do – that assets largely move together these days, you have to wonder if GC could hold up in a major equity bear market.

My best guess is that the next big move down happens by the end of July, initially to low 1200’s, bouncing back to around 1250 in September before a much bigger downdraft in October. When that happens, I think it takes most other assets with it — including gold.