Although the comparisons to 2007, the bearish technical indicators and the dismal fundamental backdrop are reason enough for me to be bearish, there’s one SPX chart worth revisiting. 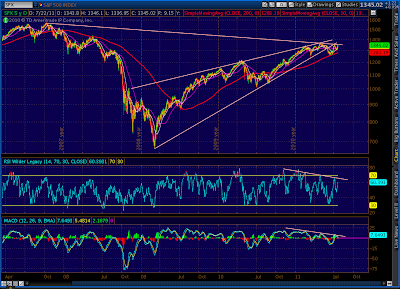 First, we were in a rising wedge from March 6, 2009 until June 1, 2011.  We broke below the wedge and have been in backtest mode ever since — currently making our second attempt.  The RSI, MACD and histogram make a compelling argument that this attempt will also fail. 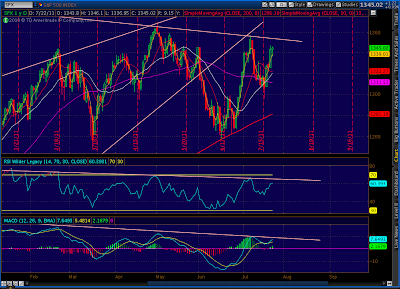 Funny, but I originally posted a version of this chart back on May 2 in Collision Looming, the second post I ever made on this blog.  With SPX at 1367.58, I drew this chart and concluded that a top was imminent.  Didn’t realize till later that the top had already occurred an hour earlier… 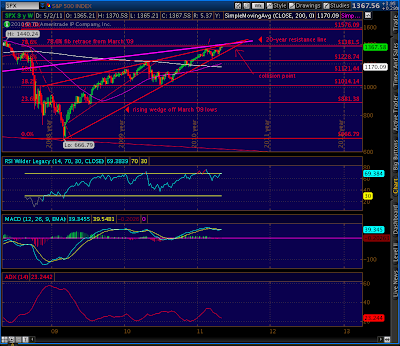 Now that ES and USD/CHF have both opened lower, it’ll be interesting to see if the relationship depicted in the chart below becomes the one that really matters. 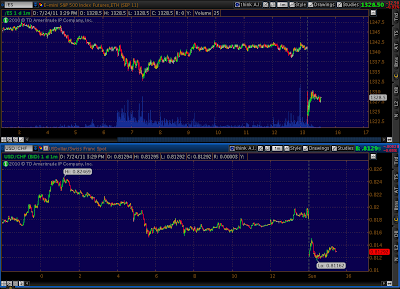 Another look six hours later.  Looks like stocks are trying to make a comeback, while the USD/CHF is lingering at the initial low. 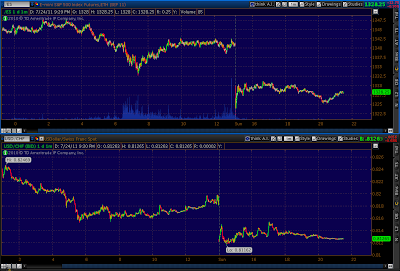 I was a bit troubled last week [So Far… So Far] when the 20 point advance that I anticipated came as the result of something other than debt ceiling news.

“While it’s entirely possible this pattern will overshoot vis-a-vis 2007 just like we did on July 7th, I think it’s more likely we’ll backpedal a little tonight or tomorrow (when people realize the Eurozone deal isn’t all it’s cracked up to be) and set the stage for another grab at glory when the deal is announced.

It’s also possible that the deal that’s ultimately reached is so wretched that the market takes it as a negative instead of a positive.  I mean, it seems a foregone conclusion that some deal will be reached, so isn’t that pretty much priced into the market?  What if — and I know this is a stretch — Congress can’t get its act together and do something meaningfully beneficial?  Might not the result be a sell off instead of a rally?”

This is obviously that sell off.  I see two primary possibilities at this juncture.  One, that we linger at these levels and rally up if/when the agreement comes.  We now have ample room to rally and could put in a 40-point advance without breaking the 1370 high.

The other possibility, just as likely, is that a disappointing deal is made and we don’t rally at all.  One obvious result of this past week’s sturm und drang is a greatly increased awareness of just how screwed up our finances are — not to mention the body politic that got us into this mess and whose job it is to extricate us before the next depression swings into gear.

Unless the deal passes the smell test, investors are likely to take it as the band-aid it is — not much help to a patient suffering a massive coronary.

Dare we talk about the third possibility — that no deal is made?  It’s still somewhat remote, although, if the market doesn’t tumble pretty hard here, both sides are likely to dig in even harder.   You’ll know it’s happening from the chorus (from both sides of the aisle) of “now look what you’ve done!”