I know, strange title.  I was going to go with “A Little Self-Doubt Can Knock the Snot Out of Your Portfolio,” but that seemed a bit excessive.

Just came across this chart from June 23 [Deja Vu, All Over Again].  I had recently discovered fan lines, and was pretty excited about the prospects.

Combining fan lines with my growing conviction regarding the 2007/2011 similarities, I plotted what I thought might happen over the next several months. 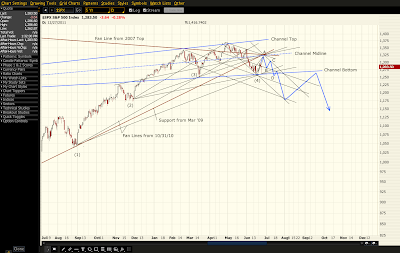 Among other things, it convinced me we were going to reverse the 112-point decline we had just experienced, bounce another 50-points to 1328 before falling to 1175 by August 3rd.

Then… I pretty much forgot about it.  I was frustrated with Prophet and went back to the regular Think or Swim charting format.

I last revisited it on July 6, shifting everything forward for the extra time the bounce took.  This meant moving a little further down the trend line, so the target shifted to 1156 by August 10th.  Then I forgot about it again… until now.   Here it is, with the last month of actual results shown. 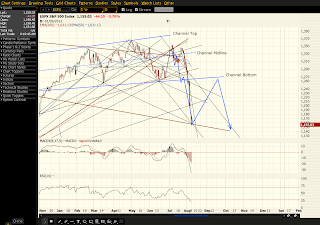 The thing that jumps out at me is the importance of taking a longer view and sticking with a plan.  I had no way of knowing (on June 23 or July 6) exactly what troubles lay ahead for the Euro-zone.  I had no clue we’d get the employment or GDP figures we did, or that S&P; would downgrade US paper.

I wish I could say I didn’t second guess myself every step of the way — trying to outmaneuver the markets, wasting time, commission dollars and profits in the process.  But, I did.  I ignored my own well-reasoned advice and forecast and traded the crap out of my portfolio.

I got nervous when the bounce didn’t go according to plan (thanks to the strategic petroleum reserve release).  I got nervous again, when we bounced higher than my 1328 target.  And, I got nervous yet again when we barely bounced last week on the way to the current levels.

Am I kicking myself?  Like the lady says, “you betcha.”  I’ve done very well these past few months but, unfortunately, it wasn’t a 44X return.

So, back to the title: lessons learned.  For starters, I’m going to take another long look at the trend lines and 2007 pattern similarities.  They’re what brought me to this dance, and I would do well to stop ogling the red-headed research across the room.

Next, I’m going to set aside some long-term do-not-break-glass-even-in-case-of-emergency funds, invest them according to my convictions, and leave them the *$%# alone!

Finally, I’m going to make an entry in today’s investment journal just like the one on June 23.  I’ll come back and read it in a couple of months.  It’ll be something like: “don’t you ever learn!?”