$5 Billion in POMO later, there’s an effort being made to turn the rising wedge break into a rising channel. 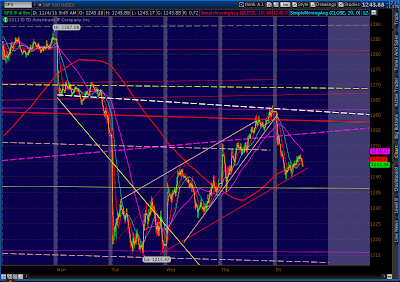 It could happen, so stay alert for a break through the red channel line (bottom.)

But, I still think the larger channel off the 1074 bottom will call the shots for now.  A return to the lower channel line will complete the H&S pattern, thus leading to a channel break. 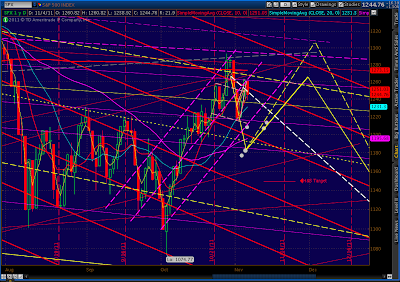 Seen on the 60-min chart, this looks like a back test of the channel center line to me. 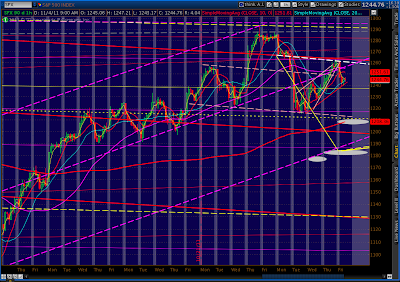 While we’re at it, remember that this whole channel is very likely simply the back test of the much bigger rising wedge from 1074 to 1292, seen below as the solid red lines. 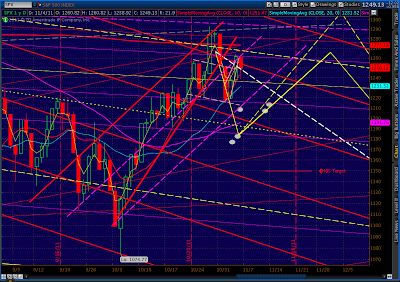 We see this sort of pattern play out at a lot of tops.  A rising wedge broadens into a channel, reforms a larger wedge (even multiple times), forms the left shoulder of a H&S, peaks at the head, then starts back down, falling first from the wedge, then finally the channel.

That’s why it’s so important to keep an eye on confirming measures such as fan lines, trend lines and harmonic patterns.

The larger rising wedge has broken this morning, leaving us a decent shot at completing the head & shoulders pattern we’ve been watching. 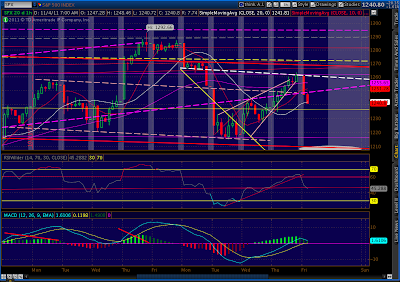 The first key level is making a lower low than the 1227 the smaller rising wedge yielded.  The next goal, of course, is 1212 to complete the H&S.;

Note the RSI on the 60-min chart has crashed through its supporting trend line, and the histogram has officially rolled over.